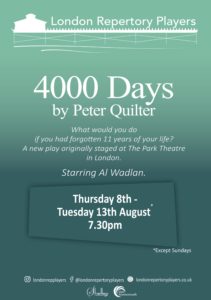 London Repertory Players’ fourth season, this time extended to five productions, continues with award-winning West End and Broadway playwright Peter Quilter’s 2016 play about a man who has been in a coma for three weeks. That might not sound particularly promising but – and it’s no spoiler to share this – the character in question, Michael, soon awakes, minus any memory of the past eleven years. There follow simultaneous battles: Michael’s own struggle to reclaim the past; his partner’s battle to reclaim Michael; his mother’s similar battle; and a war of words, personalities and emotions between the latter two. It makes for a thoughtful, often wittily amusing and at times poignant piece of theatre – certainly one that never becomes heavy going.

LRP stalwart Al Wadlan plays Michael. Always a dependable actor, Wadlan here adds to the range of actors he has been seen bringing to life at Shelley Theatre in recent years, thereby underlining his versatility. He does so with a nicely judged performance, steering clear of the competing pitfalls of mawkishly milking Michael’s dawning realisation of the full extent of his predicament or the temptation to play it solely for laughs. From his waking, he comes across as an entirely sympathetic character, dealing with a need to know and a desire not to make either of his visitors victims of what has befallen him.

As his mother, Carol, Claire Fisher similarly avoids cliché: she is no sentimental old dear but a character hardened by life, wholly resistant to whatever charms Michael’s partner might have had for Michael himself, genuinely wanting to help her son and struggling to stay the right side of the divide between caring and controlling. It’s another nicely judged performance. LRP debutant Adam Trembath avoids stereotyping in his portrayal of Michael’s long-time partner Paul, now a complete blank to the man with whom he has shared love. While possibly not as instantly persuasive in the role, he nevertheless grows, partly with the writing, as the play moves forward.

Along with the central performance, what keeps the audience absorbed are the three-way relationships that develop throughout the play, the sense evoked of time lost and the resultant quest for self-identity. All could become sententious, heavy-going or indulgent: none do, partly because of the writing but also because experienced director and LRP’s producer Vernon Thompson maintains a light touch throughout. The private hospital bedroom, all clinical white, provides a bright canvas for the actors, in more ways than one, to which all three respond with energy and individual plausibility. Rather like other three-handers, such as Pinter’s The Caretaker or Reza’s Art, but in its own distinctive way, 4000 Days exploits the dynamic potential of the form, at times tense, often light and genuinely comic: all three two-way relationships hold our interest and inform the tripartite tensions and sympathies present for much of the “action”. The use of projection, complementing for the audience the use of newspapers for Michael, works well, albeit as a rather bleakly comic reminder of what we have all been living through since 2008!

The episodic structure of the play works to its undoubted advantage, keeping it from ever dragging or the writing from becoming self-indulgent, the choices of linking music serving the production well. The publicity for the production advises that it contains some sexual references and strong language: it’s minimal, barely noticeable in the context and should not deter anyone from buying a ticket. And therein lies the most disappointing aspect of what was its second performance: LRP might have begun with a staple of thrillers but they have done well to diversify, as this production confirms, and it deserves bigger audiences than that of which I was a part. I recommend that you grab a ticket for one of its three remaining performances (Saturday 10, Monday 12 and Tuesday 13 August at 7.30pm). It’s a gentle, compassionate but always engaging evening’s theatre, a play that was new to me and to which I’m very pleased to have been introduced. And, for any readers averse to late nights, the performance closes at 9.20pm – still nice and light!