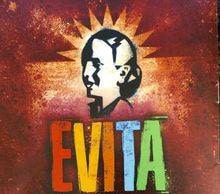 This very well-known show has been given a Footlights makeover, director David Humphries creating an elegant and excellent production, showcasing some amazingly mature young talent.

This is one of Lloyd Webber’s most complex scores, more akin to opera in many ways, but the cast make it sound so easy to sing, such is the assurance and confidence of the performances. Martin Bennetts as musical director has certainly worked hard and it has more than paid off, while leading an orchestra that complements and never overwhelms the youthful cast. The interpretation does not rely on replicating the well-known professional performances either, which makes this vibrant score seem fresh and exciting once again. The last twenty minutes are particularly good, creating a tense atmosphere as the inevitable decline is played out. Diction is very good throughout, and the chorus is very well-disciplined, the ‘slow-mo’ flag waving and demonstration work being particularly effectively presented.

Kelly Fuller’s Latin-influenced choreography brings much animation to the proceedings, from haughty ousted aristocrats to brooding army types. The ‘Art of the possible’ sequence showing the upward mobility of Peron by simple box-step movement (a viscous Sound of Music ‘So long, farewell’ influence, perhaps) is excellently done.

All the leads are vocally exceptional. Georgina Cox rarely leaves the stage, coming into her own with her damning dismissal of Peron’s younger mistress as she climbs the ladder to power. Her phrasing and dexterity are highly commended, never more so than with the signature ‘Argentina’ song which dominates the opening of act 2, the ‘Have I said too much’ lyric dripping with emotional sincerity. Her facial expressions as she fights her demise are quite haunting.

Harry Chandler is a smug, arrogant Che, his casual stances yet strong stage presence giving just the right amount of polar opposite opportunism to the role. The subtle way he picks up the loosely dropped peso notes from the stage and just pockets them is one of many ways he commands the stage both as narrator and enquirer. ‘Waltz for Eva and Che’, the ultimate question and answer session, is just brilliant in choreography, style and bravado, both Eva and Che relishing the melody line. His singing throughout is very strong and grabs your attention, the vocal range proving no obstacle.

Josh Henderson brings a tenderness to the character of Peron I have rarely seen, giving implication and substance to the journalistic idea that the relationship between Juan and Eva is more than just political alliance and expediency. His reaction to the beautifully sung ‘You must love me’ and his strong defence of his wife in the eloquently sung ‘She’s a diamond’ brings much depth to the role.

Harry Dennett as Magaldi sings with passion and confidence, making the most of his time on stage. The complicated score after ‘Night of a thousand stars’ is so well executed, I have not heard a professional handle it better. His vocal talent is quite remarkable.

And the same could be said of Nancy Longland as the un-named mistress. In her hands the well-known ‘Another suitcase in another hall’, with equally superb harmony work from Che and Kelan Pannell as the responses, becomes spirited and vivid. Placing the response guys just off-centre allows her full audience concentration, attention to detail again being to the fore.

Wardrobe is equal in attention to the style of the period: from nurses and militia uniforms to Eva’s haute couture, there is an elegance and deference to the period that Heather Cousins and Sue Tatnall always bring to their work. Costume changes for Eva are so quick, yet slick and effortless, as are scenery changes and prop delivery under the capable hands of stage manager Karen Newton.