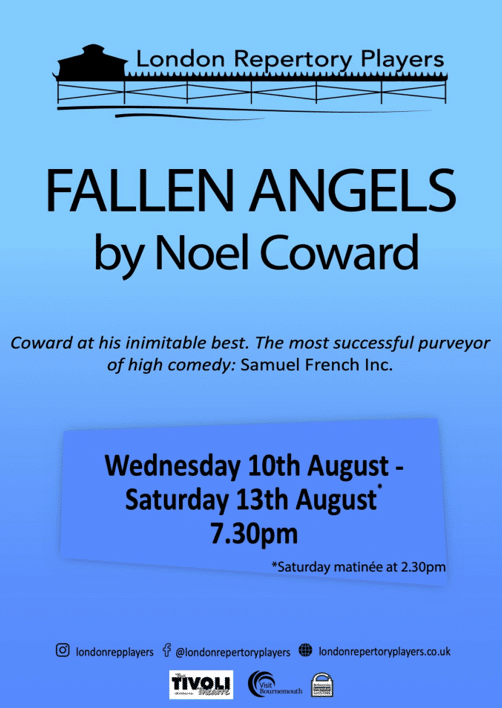 The third play in London Repertory Theatre’s season at Wimborne’s Tivoli Theatre, Noël Coward’s Fallen Angels, was originally set in and first performed in 1925, meeting with opposition from within the Lord Chamberlain’s office, then responsible for censorship, and was only approved for performance after the intervention of that officer himself. The previous year, Coward had found success with his similarly controversial The Vortex, which had significantly raised his popularity among theatre managements and profile within the theatre.

Dealing with what was then the precarious subjects of premarital and adulterous sex, that and its designation as a comedy divided critical opinion when it opened at London’s Globe Theatre. As was clear from the opening night of LRP’s production, a modern audience – or, indeed, any audience over the last 70 – 80 years – would find themselves bemused at those original qualms and unquestioningly entertained by Coward’s light-touch handling of his material. That is underlined by the fact that the play so easily accommodates itself to director Richard Mullins’ relocation of the London flat in which the action is set to 1962.

There is an element of French farce within the situation that underpins the play – but without the more frantic elements that characterise farce. Two married friends, Julia Sterroll and Jane Banbury, are all aquiver at the prospect of renewing acquaintance with Maurice Duclos, with whom both had “very close” relationships while still single. This reunion is facilitated and the potential for marital infidelity increased by respective husbands, Frederick and William, heading off together on a golf trip.

For Victoria Porter and Kirsty Cox, the central roles of Julia and Jane provide roles that must be a joy: their relish was certainly in evidence throughout the opening night. As Julia Sterroll, Porter is rarely off the stage and she makes the most of the opportunities provided by the character, varying according to which other character she is sharing scenes or passages with. She and Neil James as husband Fred provide a strong start to the production, making the most, as is the case with all characters throughout, of Coward’s witty, often wry and caustic dialogue.

When Porter is joined by Kirsty Cox’s Jane, the two share the liveliest section of the first of the three acts – and this is built upon, exploited to the full and produces the play’s most broadly comic moments in Act 2, which is occupied solely by the two as they succumb to the effects of drink, suppressed yearning for times past and possibilities imminent, and rivalry for the attentions of the eagerly-expected Maurice. The direction could, perhaps, have incorporated even more variation in pitch and tone while, at times, the vocal texture remained too abrasive for too long, but these are matters of fine tuning. Both Porter and Cox bring great emotional and physical energy and diversity to their characters and to the relationship between them, the latter swinging from the conspiratorial to the confrontational, the mutually supportive to the bitterly divisive. Before – a long time before – ‘Ab Fab’, there were definitely Julia and Jane!

As with Porter, Cox’s performance is particularly praiseworthy for the variations in how Jane interacts with the others: notably Julia, Jane’s own husband Willy and the longed-for Maurice. More than mere appendages to their spouses, Neil James and Al Wadlan, as Fred and Willy, whose own falling out is enacted off-stage, create plausible and differentiated characterisations, generously allowing the female leads to use them in establishing their own characters while, at the same time, treating the audience to performances enjoyable in their own right. Completing the male line-up is Mitch Capaldi whose Maurice proves to be suave and assured, with clear evidence of why he had previously been and is now again able to tip Julia’s and Jane’s good sense off balance. Capaldi does so while ensuring that Maurice comes across as a sympathetic character whose quick-thinking contributes substantially to the play’s dénouement – no lounge lizard stereotyping here.

Completing a consistently strong cast is Hepzibah Roe as the Sterroll’s newly acquired “treasure” or maid, always referred to, by mutual agreement, by her surname Saunders. While Coward’s writing ensures that it would be difficult to reduce the character to a token stage maid, Roe makes the most of the role. Her pert, self-confident maid, an expert, it seems, on a range of unlikely topics, including golf, cocktails, music – she has a very strong singing voice – French and pebbles (honestly!) enlivens her every appearance on stage while her interplay with the two female leads in particular is always effective. Having seen the first three plays in London Repertory Players’ five-play season, I’m intrigued to see her Beverly when the season closes with Abigail’s Party.

Richard Mullins’ direction ensures that the play’s pace is maintained and his cast’s playing is always disciplined while willingly embracing what could descend into knockabout comedy but retains its grounding in character. He is well-served by Deborah Pike’s tidy set, which enhances without in any way overwhelming the performances.

To conclude by pointing out that the opening performance was well-received would be an understatement and a disservice: the reception, at the final curtain, from a good-sized audience was delighted and vociferous. With the play running until Saturday 13 August 13, I hope that many more are able to share in their enjoyment. Thereafter, another change of mood sees the company continue their season with I Have Been Here Before, one of JB Priestley’s skilfully crafted and thought-provoking ‘Time Plays’, which opens on Wednesday 17 August.