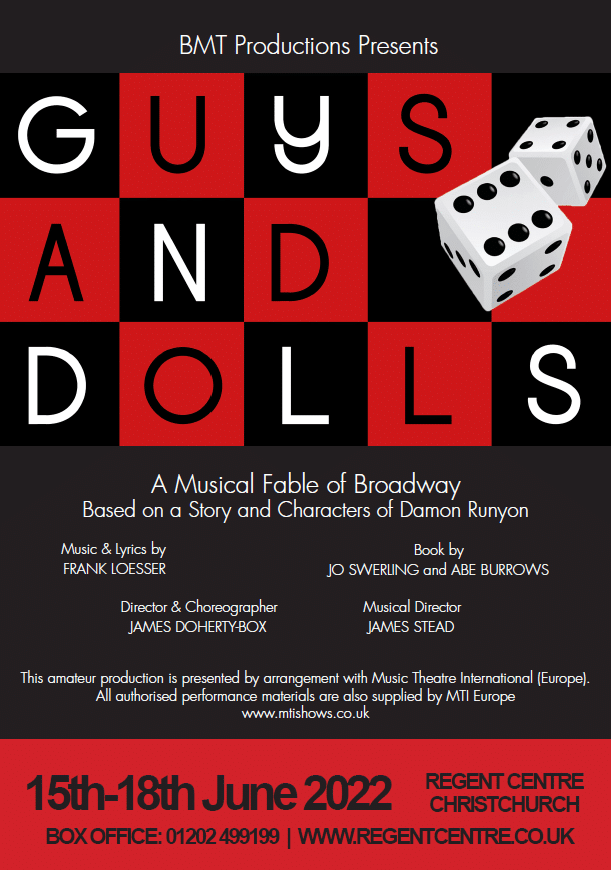 This musical was first performed over 70 years ago and takes place among the small-time underworld characters of New York and still manages to thrill and excite its audience. Nathan Detroit played by Rob Arrowowsmith is superb in his role as he tries to find a location for his ‘floating crap game’. He is a very lovable rogue and you are in no doubt that he loves his long-time girlfriend (14 years) Miss Adelaide, Suzy Hill. l I loved her portrayal of the character and her powerful voice. Her comedy and facial expressions had the audience laughing throughout. Trying to get money for the next crap game, Nathan makes a bet with Sky Masterson (James Dixon-Box) and challenges him to ask the Leader of the Salvation Army, Sarah Brown (Amy Mcintosh) on a date to go to Havana for dinner. However, things don’t go as planned and they fall in love. James and Amy have a wonderful on-stage relationship which is very believable and their singing voices are just wonderful.

Nicely Nicely Johnson, played by James Dixon-Box in the first half and Chris Moore in the second, is a fabulous ‘larger than life’ character, he brings the stage alive whenever he appears, it was very noticeable when Chris arrived after the interval. I particularly enjoyed the performance of Adam Davis playing Benny Southstreet, he was perfectly cast and was obviously enjoying every moment of his role. Ian Metcalfe as Rusty fitted in well with Chris and Adam, but he really excelled as Big Jule where he changed his character completely. He never fails to delight his audience with his comedy and timing. Arvide Abernathy played by Denis Carlton, I am sure he must be Amy’s grandfather because he was so convincing, a lovely portrayal of the role.

Both Rex Anderton and Oliver Faulkner were good and although not lead roles certainly added to the production.  Andy Scott as Lieutenant Brannigan was amusing and definitely an ‘old pro’ at being on stage. I have to mention Jenny Corbin as General Cartwright; she took on this part at the last minute and certainly did it justice.

The other characters and the ensemble were all very good and enhanced the whole production. My eyes were particularly drawn to Mary-Lou, Tess Clark, and Mimi, Jessica Nicholls, they had such stage presence and were lovely to watch. There was so much talent up on stage it was a treat to watch.

James Stead and the band were fantastic throughout the show, I loved seeing them in the background, and the music they produced was superb. Most of the songs are well known and loved so it was good to leave the auditorium humming along to the tunes.

The whole production was not without a few hitches on this opening night, and I must admit when James Stead announced at the beginning the changes I thought “Oh dear, how is that going to work?” However, it was all overcome, and it did not deter from the enjoyment we all got from the show. It was an excellent production, one which they should all be proud. I hope the rest of the week goes without any issues and that you have full houses.