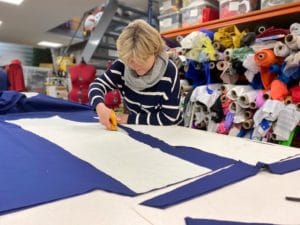 Says HCP Chairman Georgina Smith: “In this current climate amongst so much uncertainty, it has been heart-warming for Charity Players to be able to donate money to those close to us and to help local causes through money raised by local people.”

More used to producing costumes for West End shows, Christchurch based Carry On Costumes has been creating uniforms for medical and care staff for free since the start of the pandemic.  Comments owner Sue Simmerling: “We started volunteering at the end of March and have been busy helping hospitals and schools across the country ever since. We are delighted that we have been able to put our skills to good use and are very grateful for everyone’s generosity in helping with these projects.” 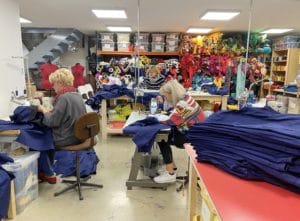 Christchurch Food Bank provides food and support for the local community. “There is a huge need for our service in these challenging times,” says Manager Tracy Blick. “It is a real privilege to assist people on their journey out of crisis, through the help of dedicated volunteers and the wonderful generosity of donors.”

Charity Players member Lucy Lamb promised to sacrifice her lovely locks as soon as she raised £1,000 for Wings2fly, a unique Bournemouth based ambulance service designed to make the last wishes of terminally ill patients become a reality. Says Lucy: “Wings2fly is an amazing charity and it has been a small sacrifice shaving off my hair for such a worthwhile cause (even if my son has hated how I look and now insists on my wearing a wig until it grows again!).” 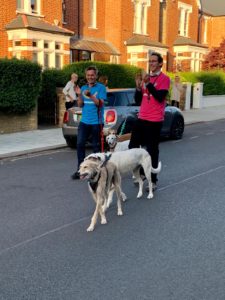 HCP President, Holby City actor Guy Henry asked his fans, if they were able, to make a small donation towards the large vet bill incurred by Lurcher SOS Sighthound Rescue. Says Guy: “I have four lurchers, Pete from the Dogs Trust, George from Battersea, and Lulu and Walter from the rescue charity Lurcher SOS, of which I’m Patron. I’ve been trying to get some money together for the Charity in such difficult times and am truly grateful for the donations people have been so kindly contributing.”

Guy has also been delivering meals from his local café to NHS workers at St George’s Hospital, as part of a local fundraising effort. “It’s only a tiddly bit of help I’ve been giving, but I’m glad to do it and the real medics are amused to say hello to Mr Hanssen off the telly!”, he says.

Since it was formed nearly 50 years ago, Charity Players has raised over £150,000 for local and national worthy causes.