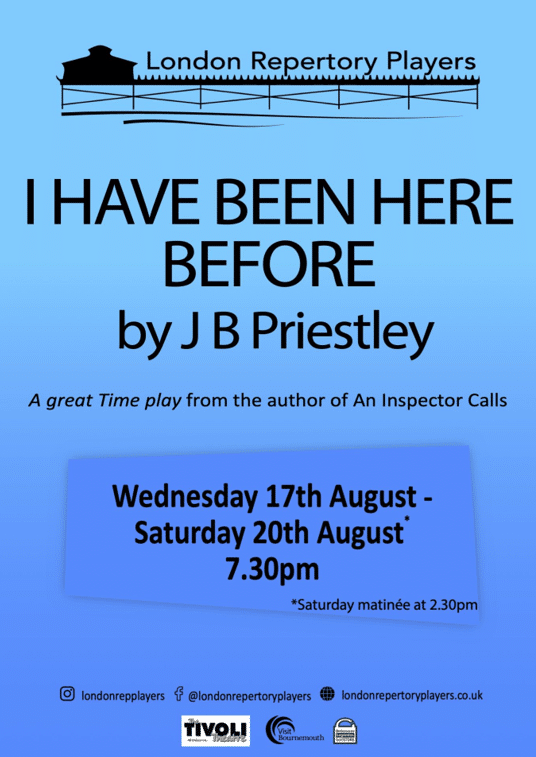 If, over the next three days (August 18 – 20), you have a free evening, or indeed a free Saturday afternoon, treat yourself to a visit to Wimborne’s Tivoli Theatre to see the fourth in London Repertory Players’ season of five weekly plays. JB Priestley’s ‘Time Play’ I Have Been Here Before is one that I had, until now, read and enjoyed but never seen onstage. I sensed, from the outset, that LRP’s production was going to fulfil my expectations – and it certainly didn’t disappoint.

Priestley was a wonderful writer, erudite and humane, with an ear for natural dialogue and an ability to combine power ideas and accessible expression even in occasional longer speeches. That goes a long way to creating theatre that is both absorbing and entertaining but it needs accomplished direction and confident, plausible performances to realise his plays’ potential. Both are present in this production.

Each of the six actors within the cast deserves praise. Admittedly, within the repertory structure, it is not always possible to match precisely the character’s indicated age to that of the available actor. So, in this instance, we have a father and daughter who, on appearance alone, seem closer in age than might be ideal; and we have an actor in, arguably, the central role who, wisely, does not attempt to play as “elderly”. Most importantly, in each case, those in question produce performances that are convincing and enormously satisfying.

The play is set over Whitsun weekend in the sitting room of the Black Bull Inn on a Yorkshire moor in 1937, the year in which it was written and first performed. Period, location and a sense of the building’s identity are all evoked in an atmospheric and thoughtfully designed set. The inn is run by Sam Shipley and his widowed daughter, Sally Pratt. As Sam, Al Wadlan brings a calm warmth that avoids any stereotypical dourness, inhabiting his character’s quiet wisdom and acceptance of the world as it is in a way that sustains our sympathy throughout. Alongside and occasionally disagreeing with him, Sally is given an excellent characterisation by Victoria Porter: strength is there but so too are an underlying fragility and a refusal to be bowed by what life has brought her. Others might seem more affected by much of the drama but she is quietly at the heart of all that happens, resisting any temptation to over-play – and that excellent judgement characterises the whole cast – and thereby producing an enormously rewarding performance. Porter’s briskness and Wadlan’s measured playing open the production in such a way that no time is wasted in engaging the audience’s interest and sympathy: both give skilful performances throughout.

Into this, by way of a late cancellation and their own last-minute decision, come husband and wife guests, the affluent Walter Ormund and his younger wife Janet. As the successful but tortured businessman Walter, Neil James adds another fine performance to those in previous productions. He depicts a range of emotions by playing the scenes and the incidents as written rather than by forcing them. By doing so, he remains consistently believable – often moving – throughout. Whether despairing, seeking escape in drink – and Walter can certainly put it away while remaining on his feet and in control – or in his willingness to confront truths, recognised from within or reluctantly accepted, James’ portrayal avoids contradictions and, by the end, sends the audience away not just accepting of but understanding and admiring Walter. In her third appearance for LRP, her first this season overall, Jessica Olim gives an equally well-judged performance as Janet, her nervy arrival at the inn blossoming into a more complex and rewarding characterisation: the material is, of course, there in the writing but it has to be mined and shared, which Olim does very effectively. Again, I enjoyed and admired everything that she did on stage.

Two further guests complete the dramatis personae. Already present when the Ormunds arrive is Oliver Farrant, the young headmaster of a nearby school, a position to which he was appointed largely on the urging of Walter Ormund, one of its governors. As with Jessica Olim’s immediate delineation of character, so too Moses Lufti swiftly establishes Farrant, as much by the subtlety of his gestures and glances as by the nuanced delivery of his dialogue. There is a troubled mind and there is passion within the character but the former is allowed to grow throughout Lufti’s performance, while the latter is held back so that it has greater impact when released. His performance too contributes greatly to the production’s achievement.

Finally, there is the mysterious Dr Gortler, an exiled German academic who has lost much, including family and his university position, prior to fleeing his fatherland. Arriving at the inn, he is initially unable to obtain a room but, as with the Ormunds, the cancellation by an expected party of three teachers brings a change of fortune for the professor – and reassures him about the timing of his carefully planned visit. In the role of Dr Gortler, Mitch Capaldi is excellent. When one can trust in how a character is represented from the outset, that suggests a rewarding experience to follow – and that is certainly the case here. Gortler’s certainty, his self-confessed lapse into resentment and his determination to pursue a difficult and at times derided path are all vital to the play’s success and the success of this production owes much to Capaldi’s fine performance.

Six individually impressive performances; confident, clear-sighted and restrained direction from Su Gilroy; pace, timing and ensemble playing: all go to make for one of the most enjoyable evenings I’ve had in the theatre in recent years. Every word was not made to but allowed to matter – and the distinction really does make a difference – within the production. Similarly, the early references to “time” were delivered naturally, without any sententious signposting, yet still resonated, as did the ticking and chiming of unseen clocks, used to italicise key moments within the characters’ time at the inn. Priestley’s structural skill in varying the combinations of characters on stage is exploited by director and cast throughout, producing a series of engrossing passages and an enormously satisfying whole.

Just go and see it. And enjoy it.