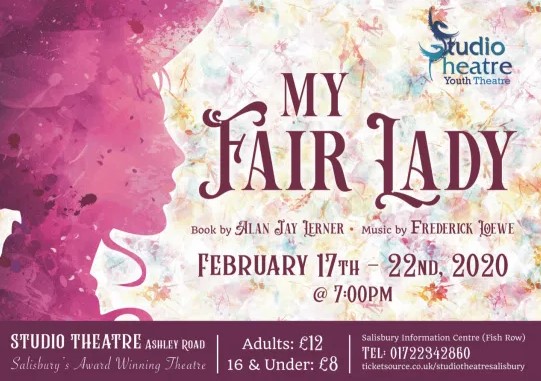 Studio Youth Theatre are carrying on that tradition with great style and enthusiasm; this is a delightful production from start to finish! The young performers are clearly learning their stage craft from solid foundations upwards, and should go from strength to strength as they continue to learn and develop.

During the run, the role of Miss Doolittle is being taken by two young actresses. Tonight, it was the turn of Daisy Pullen, who makes a superb Eliza! She has a wonderfully expressive face, every thought and emotion of the character reflected on her face, with a beautiful singing voice and excellent stage presence.

Studio Theatre’s website states that there are two Elizas cast “due to the long nature of the show”; the role of Henry Higgins is equally huge and Hugo Clark brings high credibility to a well-rounded character, focused with the right touch of arrogance, subtlety and underlying vulnerability. Higgins has a plethora of dialogue to deliver and this was almost faultlessly delivered by Clark; the occasional falter was dealt with in a professional manner, showing a high level of maturity. His singing is full of musicality and rhythm, adding another dimension to the character.

There is first class support from Matt Gray as Colonel Pickering (great facial expressions, naturalistic reactions and a distinct aptitude for comedy) and Cassia Wooley as Mrs Higgins (a strong actress, bringing warmth and a maternal fortitude to the role). Adam Pinnock (Freddy Eynsfield-Hill) and Martha-Rose Mckeown (his mother) both played a multitude of additional personalities, bringing vibrant and diverse characterisations to the different roles, delighting with their comic timing, singing and accent skills, and each with brilliant stage presence.

The same could be said for the ensemble, creating distinctive individual characters which were beautifully portrayed, and their stage discipline with slick scene changes is highly commendable. There is a very clear distinction during singing between their Cockney accents and the wonderfully clipped upper crust accents of the ‘Ascot Gavotte’, coping with the deceptively difficult harmonies with precision. The choreography during ‘Get Me To The Church On Time’ emphasised their all-round abilities and indicated that they would have been very capable of more dancing in the company numbers.

With an upbeat pace, good direction, great harmonies, atmospheric lighting and strong performances, this is a “lov-er-ly” way to spend an evening!