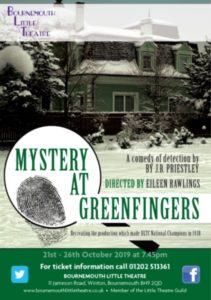 I do love the Bournemouth Little Theatre. Its intimate feel, the raked seating – enough for a little over 80 people a night, and the history that surrounds it. I’ve been coming here for years, either as a performer or as a punter and I love seeing the old photos, the old and new promotional posters for shows… And the people. Always the people.

This is the centenary year for BLT. It didn’t always run out of Jameson Road in Winton, but started out as a project of performing in such intimate venues as members’ homes then, later on, at what was the Palace Court Theatre in Bournemouth, which, whilst now a church, still has parts of the old theatre in place and is being opened up for a short period to share in the centenary celebrations, along with an exhibition at the Bournemouth Library throughout October.

Also, as part of the celebrations, this play, originally performed in 1937 as part of a national theatre competition run by The News Chronicle (which BLT won – the trophy being part of the above mentioned exhibition), is being revived to much excitement from the director, Eileen Rawlings, who gleefully tells us that the actors edition of the play lists the first performers of this play as a set of BLT performers of the day.

The play itself was written by JB Priestley specially as a piece for amateur dramatic societies, such was his gift for gifting. It has a simple but well utilised and presented set, and ten performing parts.

On the one hand, one could say it is dated – well, of course it’s dated – 1937, remember? The writing is classic Priestley in its will to give each character an expositional style so the viewer doesn’t lose sight of who they are and the characters themselves are, in many ways, caricatures, which again is classic JBP – if you think of ‘Arthur Birling’ as the grotesquely presented capitalist in An Inspector Calls you’ll get my meaning. It is also, in some ways, Priestley’s foray into the world of farce.

Set in the Greenfingers Palace Hotel in the Peak District, a couple of weeks before its grand opening, the main parts are of staff members and those with some vested interest in the hotel itself, as it hasn’t opened yet.

You’ve got the assistant manager, Henley – John Adams has a lovely voice and a gentle stage presence. You’ve got the feisty, cheeky, book-keeper/secretary, Edna – Julie Sissons has good pace and energy.  And there’s the Chef Arnold Jordan – an interesting portrayal by Adam Stoddart.  I’m not sure what the character notes were for this part, but given that he hadn’t been born, I’m guessing that “Trying to sound like a bad Bruno Tonioli” wasn’t the author’s plan.

You’ve got the mysterious femme-fetale in Miss Tennant – Fiona Richards does well, but looks more 1960s than 1930s. The housekeeper with a secret, Mrs Heaton, is nicely played by Issy Coombs and the barman with boot polish on his head, is Chris Huggill.

There is a nice chemistry between the two maids – Clara (Andrea Travers) and Sally (Dionne Polychronopulos).  Both of whom get their moments out very well – a particular highlight being a monologue about how hateful being a hotel maid can be, in the latter half of the play from Dionne.

The ‘Mystery’ is that gunshots have been heard and what was an impromptu guest is missing, with only a blood-stained hanky as evidence…  Enter Miss Tracey, who brought said guest along. Great energy and pace from Nadine Ellison here. Very much a joy to watch and, finally, we have the Policeman in the shape of Matthew Ellison, who doesn’t disappoint and creates a full-on character for Mr Crowther – I think to the level that Priestley’s writing would have demanded.

This was opening night and sometimes nerves creep in, which can affect pace. These are good actors and I am certain that as the week progresses, that will tighten up. It usually does when, as is clearly the case here, a lot of rehearsal time and personal dedication has gone in to making the show happen. So, I’m going to put the pace issues down to nerves, which, from the second night onward, will be eradicated and this cast will give you a performance their enthusiasm deserves.