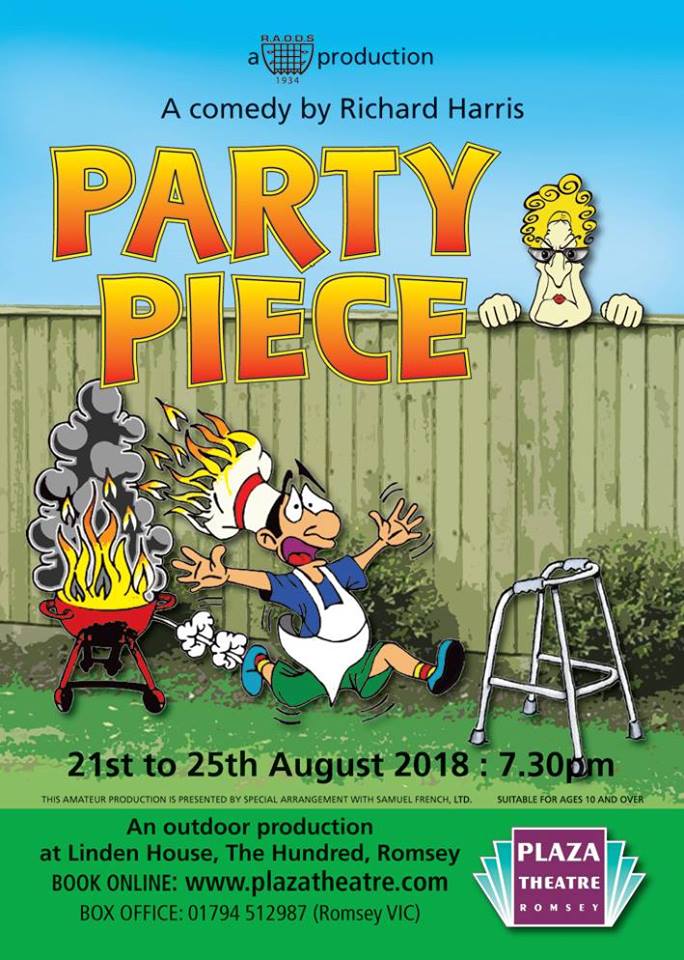 It is the night of Michael and Roma’s house-warming, complete with its reverse fancy dress theme. The evening should be lively and entertaining; however, a string of hilarious disasters ensues, complete with non-appearing guests, a rampant BBQ, a rather mobile Zimmer frame and the probability of a furious, estranged husband making an unwelcome appearance – all set against the ongoing feuds between neighbours and families!

This is a wonderful example of comic farce at its very best, with highly skilled direction from Nick Longland (assisted by Lyn Butcher) bringing out every nuance of verbal and visual comedy from an equally highly talented cast. There are absolutely no weak links at all amongst the cast of seven, each creating in their own way very heightened, strong and real characters. In his programme notes, Longland stated that he believes “the essence of great comedy is putting real people in ridiculous situations rather than the other way around” and the cast certainly achieved this with panache. Although the fictional characters may seem on the one hand to be exaggerated stereotypes, they are all also instantly recognisable from people that I have met in reality!

Matthew Ellison is outstanding as Michael, his tireless enthusiasm and energy capturing the spirit of the less-than-composed medical doctor, condescending towards Roma (Jo Barnard), dismissive of his guests and obsessional about his stereo, with a terrific vocal and physical performance reminiscent of a cross between Basil Fawlty and Boycie. Barnard is also highly entertaining as his understandably neurotic wife, with fleeting moments of spirited passion showing a deep understanding and grasp of her character, while Kerry Butcher (Sandy) and Steven Lilly (Toby) are excellent as Michael and Roma’s guests, with superb comic, almost surreal, characterisations.

Meriel Shepherd almost (but not quite!) steals the show as the curmudgeonly old neighbour – Shepherd’s physicality, comic timing and character acting are simply second to none. Mrs Hinson (Shepherd) has lived in that house for over 40 years and woe betide anyone who gets in her way! Her daughter-in-law, Jennifer, certainly tries to stand up to her and the delightful interaction between Shepherd and Georgette Ellison (Jennifer), verbally, physically and with the subtlest of facial expressions, is terrific to watch. Leighton Fort gives another dynamic and strong performance as Mrs Hinson’s son, David, and the change in his personality between husband and son is very well captured.

Farce needs to be fast paced and again this is in great evidence, with sharp dialogue delivery (great diction and overall projection without the use of mics), slickly timed entrances and exits and terrific attention to action overall. One of the joys of live theatre is for the audience to be able to watch whichever part of the stage that they want to, without being restricted to a specific area that (with film or TV) the director or cameraman chooses. The overall stage business here really sets the feel of individual hives of activity in each household, but without detracting from the area on set where the dialogue is being spoken, while any exaggerated noise or action merely serves to switch your attention at just the right moment to keep the action and narrative moving along at the perfect pace for farce.

The walled garden of Linden House in Romsey is the perfect aesthetic setting for this fast-paced domestic farce, somehow forming an ideal backdrop for the very well-designed two-storey Victorian London terraced houses, despite the different styles of the residential property to the scripted ones. There is great attention to detail in the finish of both houses and gardens, each depicting the very different styles and approaches of the individual inhabitants and enhanced by the superb and comprehensive array of props. We were also blessed on opening night to have an almost perfectly still, dry and warm summer evening, also ideal for the BBQ scenario to unravel before us – and unravel it certainly did, augmented by the excellent special effects!

The only couple of minor niggles on opening night were that, during the earlier part of the evening, the quieter female voices were at times overpowered by the noise of traffic passing (although this improved greatly during the course of the evening as the traffic lessened) and that, due to the performance area being level with the audience, some of the seated action is unavoidably obscured from view through the rows of audience (with a few people choosing to stand at the back to get a better view). However, this doesn’t at all detract from the hilarity of the play and performances and shouldn’t be an issue at all when the play is performed in a few weeks’ time at the world famous Minack Theatre in Cornwall; the tiered seating above the stage area of that open-air theatre, carved into the cliff above the sea, will allow the audience to have an unencumbered view of all the excellently thought out and directed stage business.

Party Piece runs at Linden House until Saturday 25 August before going on the road to be performed at Cornwall’s Minack Theatre from 3 – 7 September 2018; a real treat not to be missed, but enjoyed at home or away!