The award-winning Highcliffe Charity Players have received a personal message from Andrew Lloyd Webber, sending “good wishes” for their forthcoming production of Cats and hoping they “have a wonderful time” performing it.

In his letter to HCP’s cast, crew and musicians, Sir Andrew recalls that his first memory of TS Eliot’s Old Possum’s Book Of Practical Cats (on which his musical is based) is “of my mother reading the poems at bedtime when I was six. I loved those poems and I often would read them again. They invariably made me happy.”

Says HCP Chairman Georgina Smith: “We are absolutely thrilled to have received such an encouraging and heart-warming message from Lord Lloyd Webber. We are currently hard at it in rehearsals and it’s been a great boost for the cast and production team. We are all so excited to be performing this iconic musical – just purrfect!”

Cats, one of the longest-running shows in West End and Broadway history, received its world premiere in London in 1981 where it played for 21 record-breaking years and almost 9,000 performances. It has since been performed in over 30 countries, translated into 15 languages and seen by more than 73 million people worldwide.

HCP’s Cats can be seen at the Regent Centre, Christchurch, from Wednesday 30 October to Saturday 2 November (six performances including a Thursday and Saturday matinee).  Tickets are £16 (Concessions £15) from the Regent Centre Box Office (01202 499199) and online: www.regentcentre.co.uk 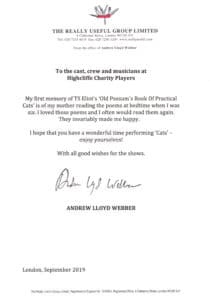