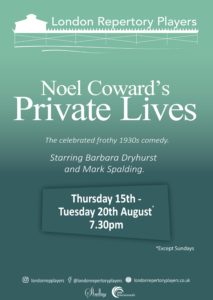 Noël Coward is one of those playwrights whose work brings a particular challenge. It’s rather like that line from The Importance of being Earnest: does one pander to the expectation or fight it? The answer to both, I suspect, lies somewhere between the two and involves going back to the text and starting again with a mind as clear as possible of audience expectations and the temptation to imitate. Those clipped tones, stylish gestural mannerisms and looks need to arise out of rather than being slavishly, even parodically, imposed on the actors’ performances.

In the early stages of last night’s performance, I wasn’t sure whether or not that was being done successfully but, as the – very evenly matched – actors warmed to their task, the balance between stylised elegance and naturalness of playing became increasingly reassuring. Of course, that elegance is, at times throughout any Coward play, often ruthlessly exposed, explored and even torn apart by those very characters who affect it. Judging from the laughter throughout the performance, from a good house, my own enjoyment was shared by all.

The fact that there was so much bigger a house than the corresponding performance, a week earlier, of a less well-known play by a less well-known writer seems to suggest that local audiences are more inclined to stick to what they know – or, in some cases, think they know. I wonder how many came last night on the basis of a familiar balcony scene and, in particular, that reference to “Norfolk”. If some did, I hope they went away appreciating how much more Coward’s comedy has to offer.

For those not already familiar with its plot, a brief synopsis: in a hotel on the French coast, two well-to-do couples have just taken occupation of their adjoin rooms/suites, including adjoining balconies. What neither realises is that one is occupied by newly-weds Elyot and Sibyl Chase while the other has been taken by similarly honeymooning Victor and Amanda Prynne. Elyot and Amanda just happen to have been previously married, to one another, and acrimoniously divorced. The play’s simply but very effectively constructed opening scene introduces each couple – and the distinctive dynamic (or lack thereof) between them before, as we know they must, Elyot and Amanda stumble upon and find themselves alone with each other. The love-hate relationship that characterised and destroyed their original marriage is not long in surfacing, as much through the “kind of marry war” that Shakespeare created with Benedick and Beatrice. All of this is suffused with Coward’s distinctive, sharply-observed, often acerbic wit. As so often with Coward (although post-World War 2 he has probably become a bit of a ‘Marmite’ writer), we delight in situation, character and language.

Seasoned LRP players – and husband and wife – Mark Spalding and Barbara Dryhurst clearly relish the roles of the now sparring, now adoring Elyot and Amanda and the playing between them is a strength throughout Vernon Thompson’s production, not just on that balcony but equally in the subsequent scenes in Amanda’s Paris flat. Complementing their own performances are those of Al Wadlan as Victor Prynne and Hephzibah Roe as Sibyl Chase, both characters revealed, sympathetically but mercilessly by Coward, as hopelessly out of their respective depths in their new marriages. It is a strength of the production that all four are played distinctively, that all the relationships have their individual flavours and that, whichever combination from within the four the audience’s attention is being drawn to – at times more than one combination – they work. Throw in a believably grumbling, unhealthy and unhelpful (Anglophobic?) maid, a well-judged entirely French-speaking cameo from Jessica Olim and there are no weak links in the performances.

The Shelley Theatre is a delightfully intimate venue but its small, raked stage presents more challenges for some productions than for others. Emma Jeans solves the challenge of two settings effectively here, her design ably supported by Kyle Best’s lighting. It’s a very enjoyable two hours of classic twentieth century theatre, well worth a visit by those already familiar with and entirely or partly converted to Coward, and by those for whom this might be a first chance to try his work.