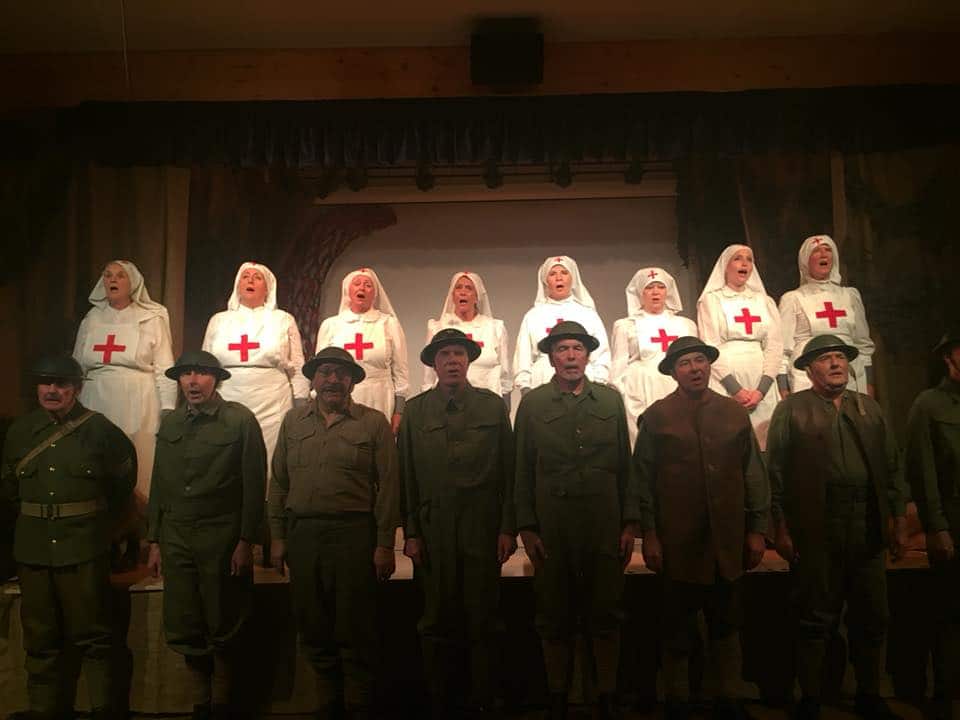 There can be few people still alive who remember World War 1 but very few who have no knowledge of the horrors it inflicted on so many. As director Wendy Mason said in her programme notes, “…it would be impossible to do justice in any medium to honour the men and women who lived and died in this period”.

Wendy’s idea was to present vignettes of life both at home and in battle to give us, the audience, an idea of just how things would have been during that 1914-18 period, and it worked superbly on every level in an evening that had the stamp of quality running right through it.

On a stage decorated with poppies on one side, a dug-out on the other and a back screen at the rear, the 16-strong excellently costumed performers brought us scenes that ranged from the light relief of a Music Hall section to the horrors of wounded soldiers being patched up before returning to the Front, of gas attacks, and going over the top to almost certain death. Woven into this were short scenes of Suffragettes campaigning for the vote or of the jobs women were doing towards the war effort, plus the famous Christmas Truce scene and General Haig’s unfortunate speech.

The two excerpts from R C Sherriff’s play Journey’s End were stunningly performed and, in my opinion, highlights of an evening that moved many, including me, to tears. How could anyone not be moved by back and white film of horses lying dead in the mud or, in the finale, poppy petals falling?

There really couldn’t have been a better, more loving tribute to this dark period of our history and I really hope that this production, sadly only performed for two evenings, can be seen again before the year is out. The standing ovation at the end said it all.