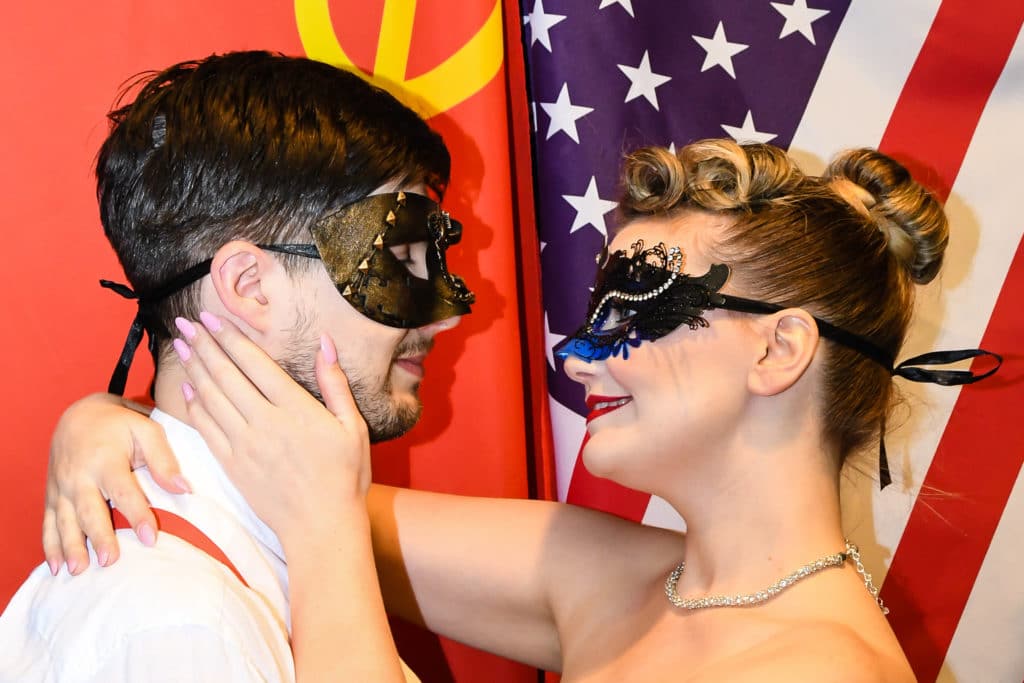 In the smallest fictious European country, situated exactly midway between East and West, the daughter of the American ambassador falls deeply, desperately and passionately in love with the son of the Russian ambassador…and, despite being in the middle of political unrest and conflict, this is a love that is most definitely requited…

Loosely based on Shakespeare’s classic Romeo and Juliet, this delightful play by national treasure Peter Ustinov is both a parody of the 1980s Cold War and a romantic comedy, where both families eventually realise that intercontinental enmities are no match for true love.

Right from the onset, it is obvious that great thought and consideration has gone into this production in a small community hall – and it pays off in spades. With the American and Russian flags adorning either side of the stage and the preshow announcements made in both US English and Russian, it is obvious that this is a tale of two disparate countries and cultures – and this is carried throughout with attention to appropriate costumes and largely consistent accents for both Americans and Russians. The General of the European country, supported by his two soldiers and deaf Archbishop, have English accents to reflect the neutrality of their status between the two superpowers and so the tone is established and reinforced throughout.

The scenery (Jon Morgan) is cleverly designed so that the town’s main square, complete with almost smoothly-working clockwork figures on the clock tower (delightful silent cameos by Lola Barrett, Beth Bowers and Maria Gora), opens out to reveal the interiors of the two Embassies, reflecting both the similarities and differences between the two countries. The lighting (Barry Kitchen), despite being a basic rig in a limited community venue, is effective in demarcating the different areas of residence and subtly reflects the transition between night, through sunrise and into the bright light of day, enhanced by equally well designed, well placed and well timed sound effects (JJ and Rachel Craig).

But this production is more than merely aesthetically and technically pleasing. There may have been a few barely noticeable hesitations on opening night, but Pete Burton’s direction has ensured that this is also a production of high quality performances throughout the well-cast company, with really good pace, clarity and characterizations (arguably stereotypical, but that is part of the satire of Ustinov’s witty yet deep comedy). Almost every movement, gesture and expression is full of purpose and meaning, but equally as impressive are the moments of stillness, intentional pauses and grounding.

Paul Jones (suave, strong-willed and passionate Igor Romanoff) and Kate Robbins (feisty, privileged and contrary Juliet Moulsworth) are a charming and engaging couple, with a convincing connection between them as the star-crossed lovers, but both as equally compelling and assured individually in their dialogue and non-verbal performances. In clear view of the audience for much of the play in their individual bedrooms beneath the national flags, even when the focus is on the action on the main part of the stage, their subtle actions reinforce the progression of the play while rarely, if ever, pulling focus from those actors with dialogue on the main stage.

Morgan is excellent as the General of this imaginary European country, authoritative yet benevolent and jovial, the ultimate diplomate as he seeks to bring peace between the two opposing ambassadors; his comic timing is great and he seems perfectly at ease breaking the fourth wall of theatre as he addresses the audience directly, giving explanatory monologues with ease and panache. Neil Sharman and Adrian Barrett are ideal support for him as the two nominal soldiers of the country’s army, enjoying a terrific rapport between themselves and Morgan, with Sharman the more naïve and affable of the two against Barrett’s wiser and more assertive compatriot – an excellent comic duo providing light relief during some of the more intense moments.

Both Colin Carter (brash, larger-than-life American ambassador, Hooper Moulsworth) and Tim Ponsford (rigid, emotionally-detached Russian ambassador, Vadim Romanoff) brilliantly depict strong and powerful political representatives of their countries and heads of their respective families, yet the conflict and despair that they feel at times is equally palpable as they struggle to come to terms with their political convictions and familial love.