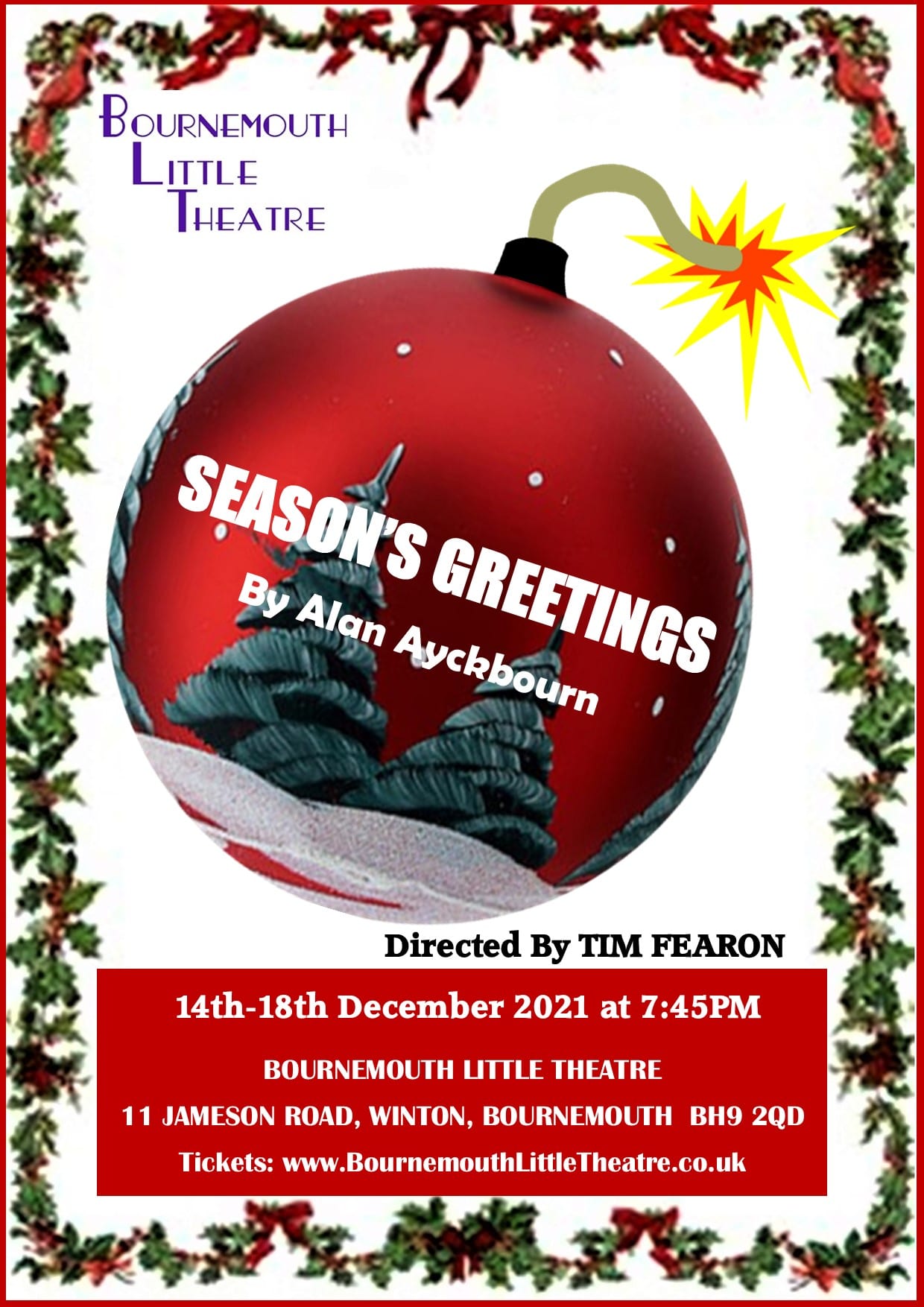 Christmas lights, carol singers, fraught shoppers – it must be December. And all over the country, amateur companies are performing Alan Ayckbourn’s Season’s Greetings. If any of them makes a better fist of it than this production, they will be doing well.

It is typical Ayckbourn in that it is a laugh-out-loud comedy about nine members of an extended family, gathered to celebrate Christmas, yet it is also much more than that: a perceptive study of three marriages and a boyfriend-girlfriend relationship, each of which is in trouble in a different way and is observed by the writer with insight and precision.

Harvey, the only unattached person, is a borderline psychopath whose subscription to QAnon is surely fully paid, but he is given some of the funniest lines and Lindsay Jones gets full value from them, playing the part with an attractive Welsh lilt. He enjoys winding up the ineffectual Bernard. John Billington shows a strong range as Bernard: meekly self-aware, but also showing that Hell hath no fury like an amateur puppeteer whose show is criticised. The comic timing of Mary Almeida as his alcoholic but perceptive wife, Phyllis, is one of the highlights of the evening. It is probably the smallest part of the nine, but she plays it to near-perfection.

Neville, the host, is so wrapped up in his own interests that he lifts not a finger to help his wife, Belinda. When she wants to discuss their relationship, he is not embarrassed – he simply ignores her. Yet he is clearly fond of her and wants peace and harmony, too; Adam Stoddart makes this conflict in him entirely believable. Anna Faraday, playing Belinda, is in her second year of an acting course at Arts University Bournemouth (AUB) but already has an impressive stage presence. She will be even better when she has worked on her diction and learnt not to speak too many lines while facing upstage.

Neville’s best mate, Eddie, is the one character with not a single redeeming feature, and Barry Gray is alarmingly convincing in this role as a completely selfish slob. His pregnant wife, Pattie, is perhaps the nicest person out of the nine, and Mica Sharples brings out her sweetness of character well.

Belinda’s younger sister, Rachel, is a mass of neuroses and in a complete muddle over her attitude to sex. Lauren Killham creates the sort of character you would run a mile from when they start talking about their feelings, but she also generates sympathy for her efforts to sort herself out. Her boyfriend, Clive, is the most one-dimensional character, but Samuel Koppel (another AUB student) makes what he can of the part – and with remarkable success, considering that English is not his first language.

Director Tim Fearon faces the problem that in the play, Ayckbourn has two or even three scenes being played out at once, with the dialogue from each, sometimes only a line or two, being heard alternately. This requires three rooms – a sitting room, a dining room and a hall – to be visible all the time. The production attempts to get over this by using room dividers about three inches high. Bournemouth Little Theatre has a proud record of overcoming the challenges posed by its comparatively tiny stage, but it simply is not suitable for some plays. Because of the three-room problem, Season’s Greetings  is perhaps one of those. On the other hand, it is to the credit of the cast and director that despite this practical drawback, they give us an impressive and thoroughly enjoyable production.

Runs until Saturday 18 December at 7.45pm each evening.