Modern adaptations of classic fairy-tales are nothing new – Disney have been doing it for years! It’s remarkable how the basic plot of a mythic folk story continues to speak to audiences today. In the case of Cinderella, just remove the talking mice and picturesque castle, replace the female damsel with a young homosexual man named Robbie, stage in London’s Soho district and you’ve got yourself a quirky musical satire disguised as LGBT representation.

The Players are not afraid to tackle the risqué and this year, they bravely undertake a relatively new and unknown musical, which always carries risk. Whilst I’m not sure this transgressive style of humour will suit everyone, it certainly appeals to me. Director Adam Myers has utilised traverse (or catwalk) staging to thrust the audience into the heart of London’s Soho and ensures his cast has no room to hide as all of the actors are quite literally within touching distance (and at times, I quite literally mean ‘all of’!!). Not that they ever needed to hide…

As loveable protagonist and ‘Cinderella’ character Robbie, Harry Young successfully maintains a beautiful innocence for a character who sometimes slips into seedy situations. His act two solo ‘Glass Slippers’ was an audience favourite as he commands the stage without gimmicks; only with his astounding vocals. Robbie’s Prince Charming James Prince, played by Teddy Clements, is equally convincing in a part that may resonate with many younger audience members. He negotiates the tricky tightrope between being true to himself and adhering to what the world perceives him to be with realistic emotions.

As the token ‘Buttons’ character Velcro, Coral Norton offers some excellent comedy to proceedings as she offers continuous counsel to Robbie. Sometimes, I think we all need a Velcro in our lives. Coral’s more subtle take on a larger-than-life character contrasts nicely with the outrageous ugly step-sisters Clodagh and Dana (Tracey Taylor-Jenkins and Georgina Smith respectively) who had me laughing out loud at their duets on more than one occasion, particularly in ‘I’m So Over Men’. A special mention to the costume department here for creating uniquely quirky and memorable outfits for each sister throughout.

There were no weak links in the cast, which is to be expected when you read their impressive résumés in the programme. Poppy Danielle offers a fine example of emotive lyricism in ‘Let Him Go’, as James Prince’s ill-fated fiancée Marilyn Platt. Meanwhile Martyn Green maintains excellent stage presence and control as antagonist William George (a “Boo” at the end means a definite job well done!) whilst David Coward, Connor Hedley and Ellie Tripp keep up the standard in their supporting roles.

I was pleased to see all cast members had microphones, allowing musical director Stuart Darling to fully command this upbeat and quirky score with gusto without the risk of drowning out the performers. Only occasionally did I miss words spoken over both backing vocals and instrumental; a shame but not too detrimental to the overall performance. Whilst unknown at the beginning, these songs certainly make an impression with Adam Myers’ imaginative and slick choreography, particularly in ‘Spin’, ‘The Tail That Wags The Dog’, and act one finale ‘You Shall Go To The Ball’.

Highcliffe Charity Players boast an impressive president in Holby City star and Harry Potter actor Guy Henry, who is not only coming to watch this show but also provides the tongue-in-cheek voice-overs throughout. The cherry on the top of this well-executed, lively and rainbow-coloured cake. I cannot wait to see more from the Society in future! 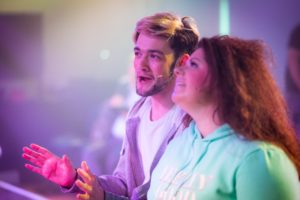 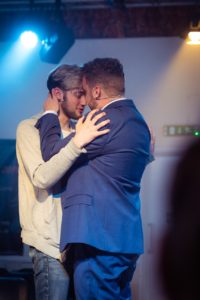 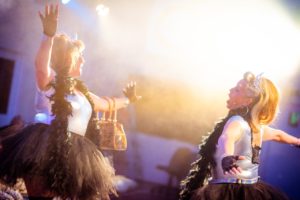