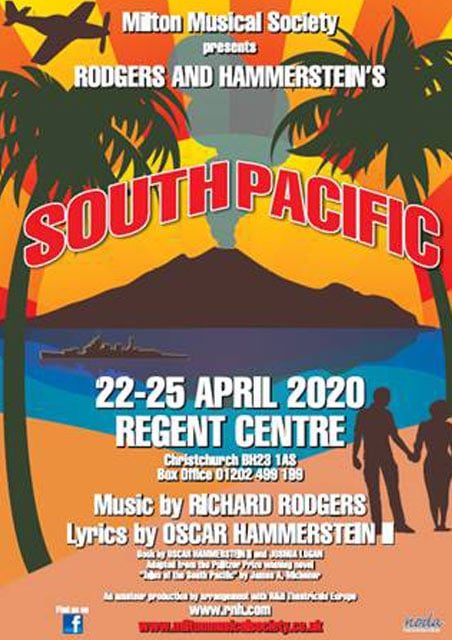 South Pacific is one of the most well-known musicals, with popular classics such as: ‘Some Enchanted Evening’, ‘Bali Ha’I’, ‘There Is Nothing Like A Dame’, ‘I’m Gonna Wash That Man Right Outa My Hair’, ‘Younger Than Springtime’, ‘Happy Talk’ and ‘I’m In Love With A Wonderful Guy’.

Adapted from the 1948 Pulitzer Prize winning novel Tales of the South Pacific by James Michener, with music by Richard Rodgers and lyrics by Oscar Hammerstein II, it was controversial at the time and still ringing chords today, as it candidly explores the issue of racial prejudice, but doesn’t let that overpower the comedy and emotion that characterises this musical.

Set in French Polynesia during the American/Japanese conflict in World War II, two parallel love stories are threatened by the dangers of prejudice and war. Nellie, a feisty nurse from Arkansas, falls in love with a mature French planter, Emile. Nellie learns that his children’s late mother was an island native and, unable to turn her back on the prejudices with which she was raised, refuses Emile’s proposal of marriage. Meanwhile, young Lt. Joe Cable denies himself the fulfilment of a future with an innocent Tonkinese girl with whom he’s fallen in love out of the same fears that haunt Nellie. When Emile is recruited to accompany Joe on a dangerous mission that claims Joe’s life, Nellie realizes that life is too short not to seize her own chance for happiness, thus confronting and conquering her prejudices.

The show premiered on Broadway in 1949 and ran for 1,925 performances. To date there have been countless professional and amateur renditions. Milton Musical Society aims to maintain its award-winning standard, bringing you this lively, colourful & thought-provoking show. Making his debut as a director for the Society is the very experienced actor and singer Mark Ward, supported by a highly skilled team comprising Ieuan Davies as Musical Director, Lucy Kelleher as Choreographer and Jonathan Shiner as Producer.