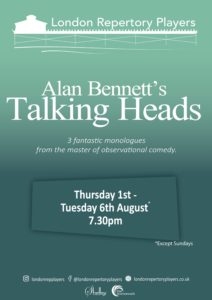 Talking Heads is a set of monologues written for BBC in the late ‘80s. For this production the company chose:

A Lady Of Letters featuring Barbara Dryhurst as Irene, directed by Mark Spalding

A Chip In The Sugar featuring Mark Spalding as Graham, directed by Barbara Dryhurst

Bed Among The Lentils featuring Victoria Porter as Susan, directed by Vernon Thompson

And performed them in that order.

To read, these monologues are a bit strange really. You’d think they’d read well but I’ve found them a bit dull and a bit dated. When they’re staged well, though, they can quite literally pop into full technicolor life; they can draw you in, you become absorbed into the life of the character, you laugh, you cry with them.

And so it was with Bed Among The Lentils and Victoria Porter as Susan, a repressed and despairing vicar’s wife, as she reflects on her misspent life in the shadow of an overbearing, egotistical so called “man of god” who is oblivious of her as a woman and of her own personal tragedy. Victoria’s portrayal was seamless. We believed, totally, her story. She was the vicar’s wife confiding in us. Everything she did, every mannerism, every reflective pause, seemed genuinely of this woman as she gently sipped her “tea” and slowly and subtly descended into mild inebriation. She took us on a journey through the church and vestry, to Mr Ramesh’s shop. I believed I could hear the voice of her husband. She had me laughing out loud and crying. She was brilliant! This was beautifully directed.

Sadly the same cannot be said of A Lady Of Letters; a story of a lonely busybody, full of bitter prejudices whose only connection with the outside world is to write letters of complaint about this, that and the other. Alan Bennett loves to take you by the hand down a gentle path then suddenly snap you in a different direction; you don’t often see what’s coming, sad, shocking or funny.

It is very funny and Barbara Dryhurst’s timing was excellent. There were times when I could really believe her, looking into the house of the people over the road for example. I could see the glow of the lights, the table set with no cloth. But mostly the performance seemed contrived. Pauses mechanical. Movements motivated by direction. There was a point where I’m sure lines were dropped and a quick reference to a book on the table helped.

A Chip In The Sugar felt much the same as A Lady Of Letters; a story of mental illness, son and aging mother – who cares for whom? Both of them have issues, paranoia, dementia. And all upset by an interloper from the past. But somehow it didn’t really make it across the proscenium.

Don’t get me wrong, these are lovely monologues and well worth watching. This was the first night of a five week run of five plays, so I’m sure they will settle into the run and only get better.

Other plays in the run are: 4000 Days by Peter Quilter which looks intriguing and I’m looking forward to seeing that; Noel Coward’s Private Lives, which is always a joy; Francis Durbidge’s House Guest and Murder Mistaken by Janet Green.

London Rep are a brilliant company so be sure to get to the fabulous Shelly Theatre to catch a couple of these great plays.