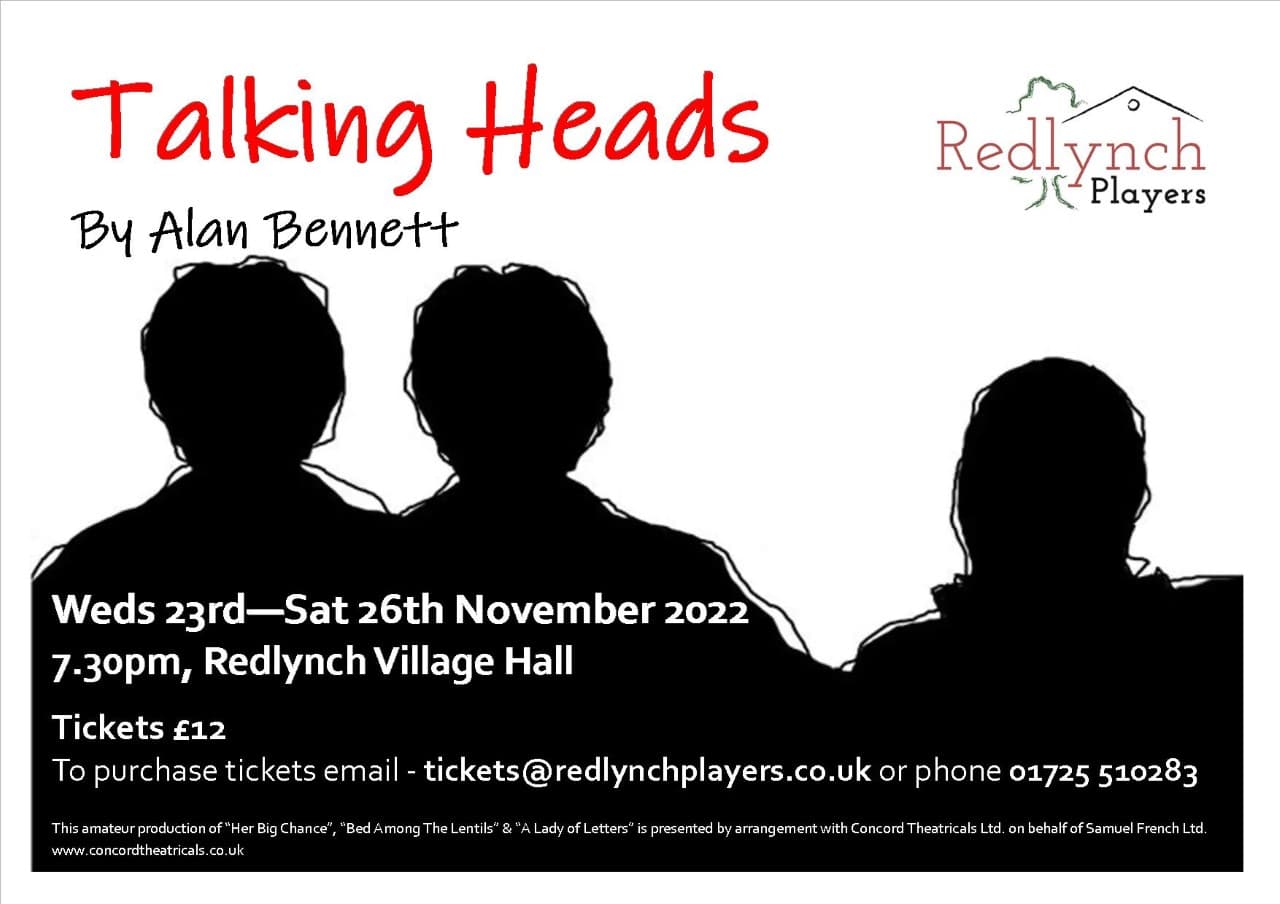 Alan Bennett’s Talking Heads is the latest delightful treat on offer from Redlynch Players, staged in the charming and cosy Redlynch Village Hall.

For many people there is only one Alan Bennett, and he requires no introduction – a household name and a much-loved national treasure, whose stage and TV writings are well liked and appreciated. He is undoubtedly one of the most popular mainstream dramatists in Britain today. Arguably he sealed his reputation as a master of wry observation and insights into the human condition with the classic Talking Heads series of 12 hard hitting monologues, featuring a who’s who of British acting talent, that were originally commissioned in two instalments in 1988 and 1998 by BBC Television and remade in 2020.

This Redlynch Players adaptation presents three of the monologues – which were chosen for their charm, wit and a healthy sprinkle of British humour and pathos. Each character has an absorbing tale to tell and each story contains surprising twists.

There is also the added pleasure of being further treated to selected readings from Alan Bennet’s diaries, which are wonderfully funny and warm hearted.

To begin, we meet Lesley, an aspiring actress, in Her Big Chance. She has just completed a somewhat dubious video for the West German, and possibly the Turkish market. It is uncertain whether gullible and ‘accommodating’ Lesley fully appreciates she is appearing in a pornographic film.

Next is Bed Among the Lentils, where we are introduced to Susan, an alcoholic vicar’s wife who travels to another town to buy alcohol and, as a distraction from her insensitive husband and his demanding parishioners, she has an illicit extra marital fling with exotic and sensitive shopkeeper Ramesh.

And lastly, in A Lady of Letters we encounter Miss Irene Ruddock, a working-class single woman who is not afraid to speak, or rather write, her mind to remedy the social ills she sees all around her. After one too many false accusations – having previously been bound over to keep the peace and also having acquired a suspended prison sentence – she eventually ends up being incarcerated at Her Majesty’s Pleasure. With the support of her fellow inmates, she learns about the real world, and for the first time in her own life she feels free and happy, despite being in Prison!

Gina Hodsman plays Lesley and is terrific in the role. She absolutely looks the part dressed in alluring satin robes with a black lacy camisole. Moreover, she delivers a performance in which she has the audience laughing at all the funny lines, whilst feeling uneasy and saddened by Lesley’s exploitation.

Ali Silver plays Susan and she too is excellent in this role. From the outset Ali Silver, as a middled aged women dressed in beige, arouses feelings of pity and despair for Susan’s unhappy lot. We immediately understand why she has turned to alcohol for solace. Perhaps ironically this part has the majority of funny lines and these are fired off in salvos in a deadpan style that a stand-up comedian would envy.

Sarah Newman plays Irene Ruddock and, as with her forerunners, she is also first rate in her role. To start with Sarah Newman’s character, Irene, is not a likeable person – she is a small-minded busybody who is ostracised by neighbours. However, by the end of her performance Irene is redeemed and we are all glad she finds happiness. Sarah Newman delivers the part faultlessly.

Seamlessly segued between Bed Among the Lentils and A Lady of Letters, Desmond Longfield reads excerpts from Alan Bennett’s diaries. These snippets of daily life events are delivered in a style with phrasing and a Yorkshire accent that is reminiscent of Bennett himself. Some of the stories told are side splittingly funny.

The stage for the play is simple, yet highly atmospheric, with a single folding chair under a spotlight – augmented by a plain writing table for the second act. To one side there is a coat stand which serves to provide for changes in costumes. There is a screen at the back of the stage on to which images are projected to create realistic period settings for each part of the play. The background sounds are perfectly synchronised with the action on stage. A high degree of professionalism has been applied here.

All in all, Redlynch Players production of Talking Heads is just great, but that’s what the local community have come to expect of this very good group of actors and Production Team. That’s why local people turned up in big numbers for yet another sell out production. Director Ron Perry and his support team have another hit.