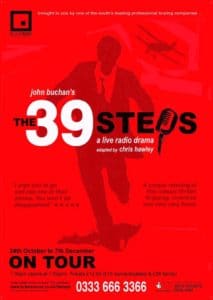 My first introduction to The 39 Steps was the Alfred Hitchcock thriller, first seen many years ago; I loved it and went straight to John Bucan’s original book – and so my love for The 39 Steps began… Back to the present, and with the rain starting to lash outside and the temperature plummeting, I entered the remote Corhampton Golf Course venue eagerly anticipating an evening of drama and suspense.

What I got was the complete opposite – an unexpectedly yet absolutely hilarious and magical BlackBox of delights!

For those unfamiliar with The 39 Steps, it follows the flight of Richard Hannay, on the run from the authorities after he is accused of a murder that he didn’t commit; he must follow the clues left to him in a little black book by a mysterious, now murdered, American in order to uncover what ‘The 39 Steps’ mean, prove his innocence and keep the forces of evil away from British shores. As already said, this is usually a tense dramatic thriller, but BlackBox theatre have added an additional twist by presenting the play as a live radio drama – and if that wasn’t enough of an additional twist, they have further compounded it by having the entire cast of the play stuck in snow, unable to reach the radio studio and so, with only 10 minutes before the live broadcast, the only people available for the broadcast are the play’s director, Julian (Bruce Chattan-McIntosh), the studio caretaker, Roy (David McCulloch) and the tea-lady, Brenda (Scarlett Briant) – surely a recipe for disaster!

What follows is an exquisitely timed and paced production, seamless transitions from the preshow music through the radio announcements to the actual start of the play, and seemingly effortless but perfectly precise synchronicity between vocal dialogue, visual actions and recreated sound effects (as, of course, the premise included the crew being stranded in the snow along with the cast). The company perform it as a genuine 1960s radio play, so there are the tense musical interludes and recorded sound effects for a melodrama, recreating the tension that you would expect in The 39 Steps, but because of the visual effects and the aside glances between the characters recreating the play, the comedy aspect is heightened and it is absolutely hilarious!

For a production of this quality, full credit must go to the unseen contributors as much as to the actors: Director Chris Hawley has adapted Buchan’s original source to ensure that this would be as brilliant an audio production as it is a staged delight and Technical Stage Manager Hannah Wood brings everything together wonderfully (the combination of pre-recorded and live sound effects would not have been so slick without her expertise; sound is usually only noted in reviews if there is an issue, but the sound quality during this production absolutely enhances the overall experience and should be acknowledged for its impact).

Chattan-McIntosh has a wonderfully rich voice for painting pictures in your mind as the events of Hannay’s adventures unravel and I would gladly listen to any audio drama with his involvement; his programme biography notes state that he has done a lot of radio and voiceover work before, and this experience translates to the ease with which he brings a strong radio presence to the stage with such style and authenticity.

McCulloch has the most incredible range of voices, accents and depicting different ages that if you were listening to this without the benefit of sight, you would really believe that there were 24 individuals performing the characters (including some very surprizing but very amusing cameos!), not just one man!

This is Briants’ professional theatre debut, having recently graduated from The University of Winchester, but she is amazing in recreating characters, reminiscent of a young Julie Walters, again with an astonishing array of perfectly attuned accents and transformations with just her stance and voice between a multitude of different ages, male or female! The subtle interactions between McCulloch and Briant reminded us that these amazing radio broadcast performances are from Roy and Brenda ensuring that the show must go on when the actual cast are unavoidable detained!

There is a misconception that radio drama is just actors standing or sitting in front of microphones, reading from a script. Not so – as was so impressively re-enacted by the trio doing all the roles for the radio play between them: all the voices, accents, their changing physicalities, facial expressions, physically recreating sound effects, and movements as dynamic as in any high class genuine radio production. The fact that performance was staged in such a small, intimate venue of a golf clubhouse actually enhanced the atmosphere and illusion that the audience was the authentic radio production’s audience.

BlackBox’s website and publicity material promises “an irreverent and affectionate take on one of our best loved stories. Full of thrills and spills, it’ll keep you on the edge of your seats and crying with laughter.” The company aspires to be “one of the south’s leading small scale, professional, touring theatre companies, endeavour(ing) to bring exciting, entertaining and innovative theatre to a variety of interesting, and sometimes unusual, local venues.” On the evidence from this particular production and performance, they achieve this magnificently in spades. For a wonderful evening of pure engaging entertainment, make every effort possible to catch one of their remaining tour dates – you will not be disappointed; it was brilliantly done, I loved every second and I can’t wait to see what they come up with next! 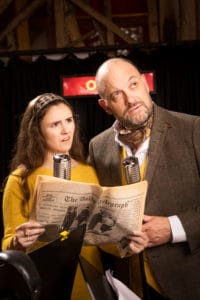 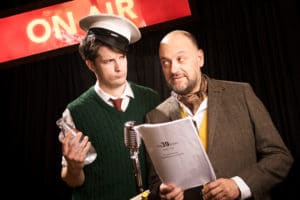 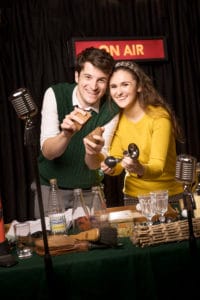 Remaining tour dates (all at 7.30pm, unless stated): 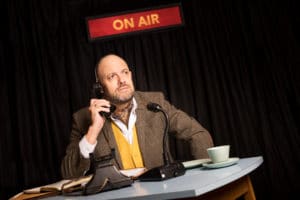 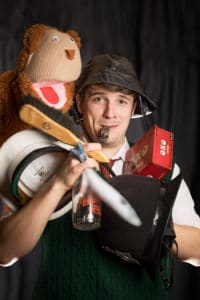 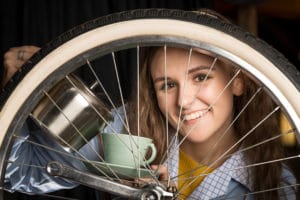