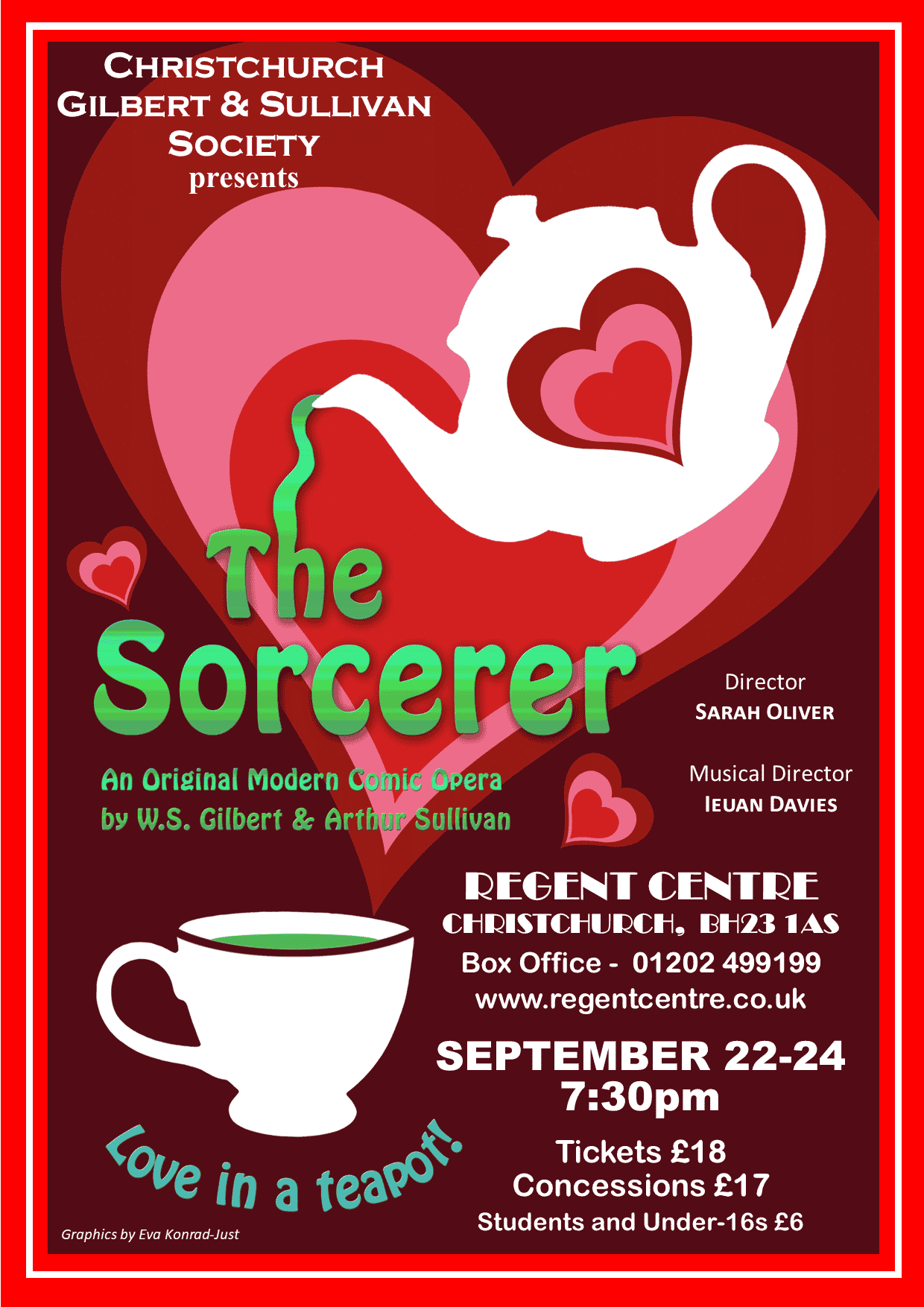 The satirical plot of The Sorcerer revolves around the English obsession with class. Alexis, betrothed to Aline, decides to test his idea that it is not just couples of equivalent rank would should marry, by hiring a sorcerer to create a love potion. This potion causes everyone who drinks it to fall asleep, and on waking, fall in love with the first person they see. This device (also used by Shakespeare in A Midsummer Night’s Dream) ensures chaos and comedy ensues with various unlikely fledgling romances, including Aline falling in love with the village vicar.

This large-scale production, which included 28 cast members and an orchestra of 17, looked terrific from the start. The set created a fantasy style village, well suited to the alchemy which followed. On a small point, I think I might have disguised the modern tent, as it looked a bit incongruous. However, the eclectic costumes, mostly with a steam punk flavour, added to the visual effect.

Of course, the most important elements of this short, comic opera are the music and singing. The orchestra, under the baton of Ieuan Davies, were magnificent and did not put a foot wrong all evening. You forget, if you are used to shows with recorded music, just how much live music adds to the experience.

The singing was generally of a very high standard – a rousing chorus and several very talented principles. Of particular note was Catherine Smith as Aline – what a voice! Absolutely beautiful to listen to. The duets between her and Adam Davies, as her love interest Alexis, worked very well. He has good stage presence and managed to hold his own against her powerful voice. Their acting was also convincing as the love struck, but sometimes confused, couple.

Suzy Davies (Constance) and John Rimell (Dr Daly) managed to successfully combine comedy and very good vocal performances to give us likeable characters that we could identify with. Brian Oliver is to be commended as the baddie, and being willing to dye his beard and moustache pink! Other principles included Christine Eastwood, Mark Ward, Jan Bishop, Patrick D’Ardenne and Gordon Short who clearly have a wealth of experience which came across in their confidence on stage.

Congratulations too to Bob Savage who successfully managed to include topical jokes in the libretto, taking a swipe at politicians and Amazon!

Lighting was used to good effect throughout the show to add atmosphere and intrigue, but the various brooches and goggles on the actors threw an odd ‘Tinkerbell’ effect onto the walls of the auditorium from two spotlights. I found this rather distracting.

The Director, Sarah Oliver, created some nice groupings on stage and her obvious experience meant she managed to move the large cast around well. Some of the performers seemed less comfortable with aspects of the choreography, as there was the occasional tendency to be too hesitant. One suggestion for the Overture at the beginning would be to encourage the cast to act in a less exaggerated way as they prepare the table and put up the decorations. These minor points did not detract from the enjoyment of the evening, and I loved the introduction of the special effects which added to the sense of black magic. These had obviously been well thought out by the Director.

Overall, this is a very slick, professional production. It is a show for those who enjoy G&S, and those who think they won’t! The universal theme of poking fun at the ruling classes is as relevant today as it always was.