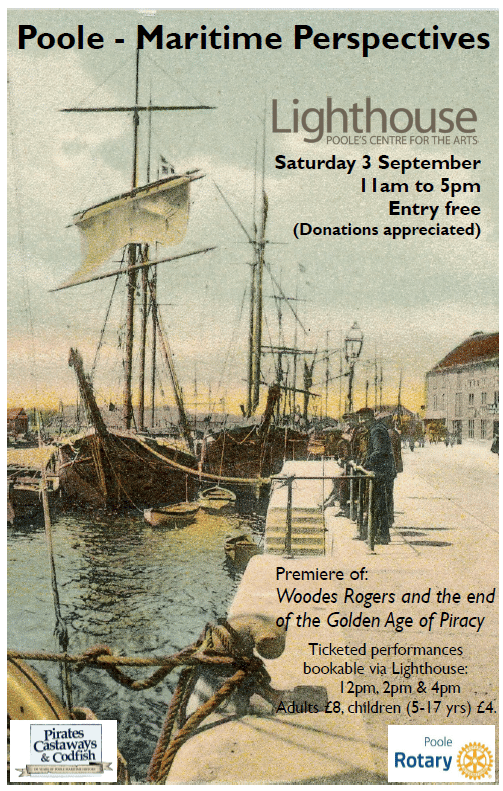 An enjoyable day of events and activities was facilitated by Poole Rotary in conjunction with The Lighthouse, Poole on Saturday 3 September 2022. Called Maritime Perspectives, the line-up provided insights into Poole’s seafaring past – especially the story of Woodes Rogers, who was born in Poole in 1679 and went on to become a national hero and best-selling author in his time, as well as the ‘Captain General and Governor in Chief’ of The Bahamas. Included in his exploits was the rescue of the desert island castaway Alexander Selkirk, who inspired Daniel Defoe to write Robinson Crusoe! In fact, it is somewhat bewildering that Woodes Rogers is so little known today given his achievements are nothing less than a genuine tale of adventure and derring-do, which was as colourful as any of the glorified British Seafarers down the years who remain embedded in the public consciousness.

Separate to the play were Sea Shanties sung by the excellent community choir Choir Engine, directed by Caroline Moss; storytelling about the plight of local fishermen who once braved the unforgiving North Atlantic by Scaplen’s Court Players stalwarts Don Gent and Nicola King; topped off with a sterling performance from singing duo Save the Whalers, who inspired the audience to sing along, and whose final song segued into a rousing chorus from the cast of Woodes Rogers And The Golden Age Of Piracy – who suddenly appeared in a line at the back of the Studio, resplendently attired in authentic period costumes, creating an impressive introduction to the play.

The stage was a simple set that provided an atmospheric pirate’s tavern and government goal, within which the story came to life.

The story began and continued to unfold with a narration of events past, present and future delivered by Captain Peter Joliffe of Poole, perfectly played with excellent articulation and realism by Lindsay Jones. The play comprises three main scenes linked by extensive monologues from Joliffe. The audience is presented with Joliffe meeting with a young Woodes Rogers and his friend Robert Williams in Poole, as they contemplate their hopes and dreams for the future. We are soon transported to the pirates’ Tavern where a confederacy of infamous and despicable buccaneers considers their options in the wake of the appointment of the formidable Woodes Rogers as Governor of The Bahamas. The story concludes in the gaol where we learn of the fate of each of the Pirates. And it is noted for the record that Joliffe eventually became Mayor of Poole.

It is a short play that only scratches at the surface, and it certainly left us wanting to find out more about Woodes Rogers – surely a sign of a good story! Fortunately, for the inquisitive mind with time to spare, there are lots of reference sites on the Internet.

13 or so actors were involved in the play and every one of them played their parts well. As already indicated, Lindsay Jones was first-rate as Captain Peter Joliffe and Marie Bushell, as Anne Bonny, and Rachael De Courcy, as Mary Read, were both particularly impressive as carousing lady pirates. But of course, it is really inappropriate to single out individuals in an ensemble production, as each of them contribute to the overall performance.

The brilliant costumes have already been mentioned and Christine Orridge has truly excelled herself with her creations.

The play was written by Katy Nutt, produced by Carole Allen, with Director Jo Puttick at the helm, ably supported by a talented production team.

This was the first production by the Scaplen’s Court Players that we have attended and we look forward to seeing them again in the future.