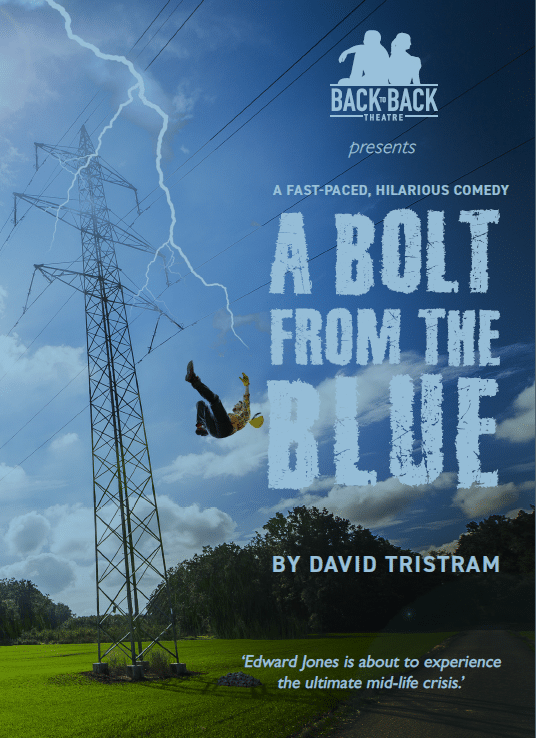 A mid-life crisis electrified whilst eating a sandwich. Which becomes a toastie. Which becomes a hypochondriac bald patch. A Bolt From The Blue, currently touring with BacktoBack Theatre, is like one of those dreams you have when you’ve had too many beers.  It bounds with sparky, madcap, inconsequential fun and drives you through to the end without ever knowing where you were before you started. It’s a joyous muddle of intersecting characters that are deliberately one step away from improvisation. The show pulls the audience along largely because it doesn’t pretend to be anything more than a good laugh. Thankfully, that’s exactly what it is.

BacktoBack Theatre is a new company with a stated aim to run around Hampshire showcasing local talent. Most recently with a pylon in the back of their car. Quite an impressive pylon (Mike Derrington). How great to have a new repertory company bouncing into life in the area. It is long overdue.

Kitty Cecil-Wright directs the play with an eye on pace. She chooses to sacrifice pathos to keep the energy up and the laughs coming. It is an understandable, sensible choice given the momentum she successfully achieves. The characters dance around in hilarious fashion but are not grounded. It’s like being electrified and thrown from a pylon on repeat. I felt like I had 30 kilovolts coursing through my veins.

The cast are uniformly accomplished. Chrissie Derrington (Narrator 2) is superb. Her versatility and accent work are extraordinary. Well worth the ticket price alone. She has the most to do in shifting from character to character and keeps the energy alive and the audience with her.

In another reading, this could easily have been about ‘Edwina Stone’. Mathew Stone as (Edward Jones) is a ball of energy with great comic timing. He uses physicality to extenuate the absurd. The scenes as he self-diagnoses at various medical establishments are a highlight. Bruce Chattan wears a dress the best and has the experience and comedy chops to light up the action. He, like Chrissie, can spin characterization on a dime. The play, as directed, needs this. They all deliver.

I would probably have had less quick scene change lighting and just bared all as costumes and hairpieces were thrown on and off. In this production the audience would have forgiven it. The artwork for the programme by AmyDawnDesign is great. The staff at the Milford Community Centre were warm, welcoming and very much appreciated. They have a very well stocked bar too.

A Bolt From The Blue is on at the Milford Community Centre until 5 February and then touring throughout Hampshire during February arriving in Winchester, Salisbury and Southampton so there is plenty of opportunity to catch this mad, daft and very funny show.