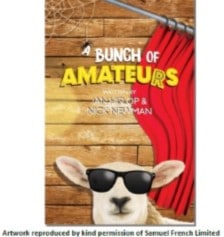 Like many amateur dramatic societies, the Stratford Players are looking at financial hardships and the potential loss of their performance venue. By appealing to Hollywood agents, they hope to boost publicity, raise essential funds and live to tread the boards for years to come.

Meanwhile, fading American action hero, Jefferson Steel, finds the idea of playing King Lear in Stratford appealing and hopes this will raise his profile, boost his movie career and keep alive his dreams of dominating Hollywood. What he doesn’t realise is that his agent has set him up to play King Lear not in the Bard’s birthplace of Stratford-upon-Avon, but the sleepy tiny Suffolk village of Stratford St John…

This is a topical, witty comedy by Nick Newman and Ian Hislop, showing the best and worst sides of theatre, from the diva tantrums and heightened emotions, the misconstrued relationships between cast members, cynical pursuit by the gutter press, jealousies and infighting, to the “redemptive power of theatre” as individuals bond together to create something very positive while they “live the dream”.

Janet West is most convincing in the role of Dorothy, Stratford’s ever-patient, compelling and clever director, with a genuine air of authority as she cajoles, encourages and influences the actors in her ensemble. Steve McTaggart juggles the very fine balance between intentionally “acting badly” as the diminishing star, Steel, (not as easy as you would think!) while also showing that this is indeed an aspect of the character rather than the actor himself, although at times tonight the American accent slipped back into English tones.

With a mix of contemporary clothes and Tudor costumes, modern film themes and Elizabethan music between scenes (reflecting the use of song in some of Shakespeare’s plays), appropriately minimal set and entrances made through the audience as well as from the sides of the stage, the audience is drawn into a cohesive piece of community theatre. Although there were some stumbles and technical hitches on opening night and an (understandable) case of the giggles at a rather unfortunate juncture of the plot, the narrative essentially flowed at a good pace, although some of the most satirical aspects seemed a little muted.

However, the intimate and friendly village hall venue is the ideal setting for this comedy about the world of amateur dramatics; the whole evening is designed to bring the community together, from Burley Players’ “famous fish and chip suppers” to the cabaret style layout for the audience, with groups encouraged to chat together rather than sit in strict rows. This is a thoroughly entertaining and enjoyable evening of community theatre – not at all bad for A Bunch Of Amateurs!