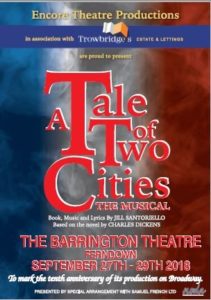 As I had never seen the musical version of A Tale of Two Cities I was somewhat apprehensive as to what to expect. Encore Theatre Productions was also a first for me, however I was ‘blown away’ by their performance. Many of you will have read the Charles Dickens novel whilst at school and, like me, found the storyline dark and depressing, but not so this production with its fantastic chorus numbers, slick lighting and scene changes it kept your interest throughout the whole show. The orchestra under the Musical Direction of Nick Sanders made this powerful musical score sound easy and they complimented the performers on stage. There were times you felt you were on Broadway, not in the Barrington Theatre.

If you are unfamiliar with the Dickens’ novel, the story unfolds in both London and Paris between the years of about 1780 to 1789, ending during the beginnings of the French Revolution. Dr Manette (Michael Mansfield), an English Doctor, is released from prison after serving 18 years for speaking out against the wrong influential people and builds a new life with his daughter Lucie (Tabitha Cox), whom he had never met. He is totally believable in the role and holds your attention throughout. Tabitha is a perfect gem and you warm to her performance every time she comes on stage. While Dr Manette is ill, they are assisted by Charles Darnay (Rossano Saltfleet), a Frenchman trying to distance himself from a past and family he is ashamed of. He takes hold of his character and makes it his own – what a voice, worthy of the West End stage. When Charles is accused of treason, he gets off the hook thanks to an uncanny resemblance between himself and Sydney Carton (Mark Everitt), a frequently drunk court barrister. Sydney has to be my favourite character in the show; he is totally captivating every time he appears. As a result of this coincidence, the two men’s lives become intertwined, and they both fall in love with Lucie. Charles and Lucie marry, but things grow complicated once again when Charles is arrested and sentenced to death based on revengeful accusations by Madame Defarge (Laura Ward), a French revolutionary whose siblings were killed by Charles’s wealthy father and uncle years ago. Laura gives an amazing performance reaching those top notes with ease and perfection. Charles is sentenced to death, but Sydney comes up with a plan to take his place at the guillotine, saving his beloved Lucie the heartbreak of losing her husband.

Other pleasing performances were Tony Lee as the Attorney General, Denis Carlton and Angela Paskins and Miss Pross as Jarvis Lorry. One mustn’t forget Alice Lonsdale as Little Lucie and Issy Angus as Little Gaspart, both of whom played their parts really well and were eye-catching whilst they were on stage.

From beginning to end this was a superb production. Jo Mansfield got all the ingredients right which made for a fantastic show. This was the first night and the whole Production team need to be congratulated; I am sure any little glitches will be resolved by tonight. Please, if you haven’t already done, so get your tickets.