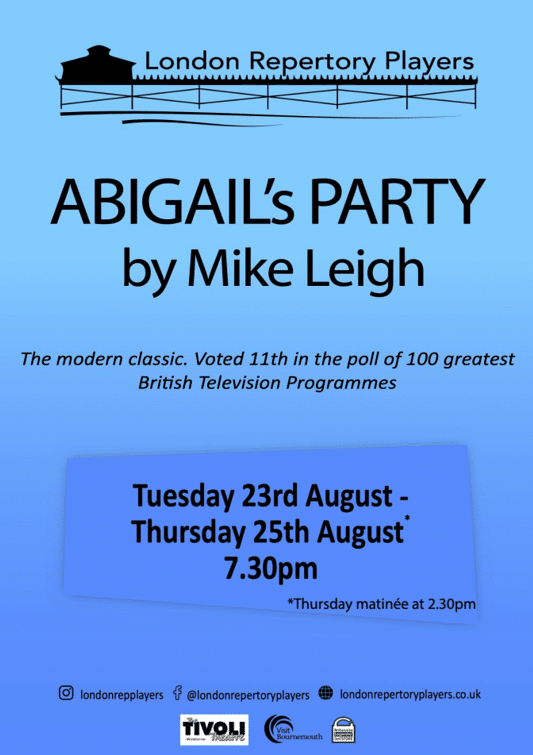 If you live within reach of Wimborne and have a couple of hours available on Thursday 25 August, whether in the afternoon or in the evening, I urge you to go along to the Tivoli Theatre where the London Repertory Players conclude their five-play season with a superb production of this modern classic. Set in the 1970s, the premise is very simple: beautician Beverly and her husband Laurence have invited new neighbours, three-years married Angela and Tony Cooper to a small social gathering. Also invited is neighbour Susan, who has lived in the street for nine years, has been divorced for three years and has vacated her house for the evening so that her 15-year-old daughter Abigail can, despite her mother’s misgivings, host a party of her own. The play famously first performed on stage and on BBC television in 1977 satirises elements of the emerging middle classes of the period. In doing so, it is crammed with moments either excruciating or enormously funny – usually both.

The BBC screening featured a young Alison Steadman in the central role of Beverly, giving a performance that could hang over any subsequent production, in a way similar to Margaret Rutherford’s Lady Bracknell. I know that director Vernon Thompson urged Hepzibah Roe, who plays Beverly in his excellent production, not to go back and take a first look at Steadman’s performance. This was wise advice as Roe gives an exceptional performance as what critic Michael Billington once described as a “monster. But … a deeply sad and vulnerable monster.” Her Beverly owes nothing to any other actor’s depictions and is all the more satisfying for that. As with the other four characters, the writing is so precise, so clear that it guides any interpretation, but it could still go horribly wrong if overplayed or played one-dimensionally. Hepzibah Roe’s performance is delightful – hugely accomplished and enjoyable, as much as anything for the sympathetic conviction in her representation of the character’s awfulness and her amiable, trying-too-hard forms of cajoling and bullying. Vocally and physically, she glides, actor and character both full of self-belief, through almost the whole play – but I cannot possibly risk a spoiler by explaining that “almost”. A wonderful, convincing portrayal.

Playing her husband, workaholic estate agent Laurence, Mitch Capaldi judges every moment beautifully. Whether frantically trying to stay on top of his work, trying desperately to combat his wife’s determined efforts to force drinks, cigarettes, cheese and pineapple sticks – it really is a terrific snapshot of the 1970s – or her taste in music on her guests, or trying equally hard to share his worship of higher culture, however superficial, with those same guests, Capaldi’s Laurence is consistent and completely believable, a flawed yet sympathetic character.

As husband and wife Ange(la) and Tony, nurse and ex-professional footballer turned computer operator respectively, Jessica Olim and Moses Lutfi give performances as admirable as those of Roe and Capaldi. She is all eagerness, lacking in any social skills other than a willingness to agree with, almost worship and slightly emulate Beverly, seemingly childish in nature for almost all of the play. He is a man of few words, but Lutfi makes every word, every glance, every small movement count so that they combine to present his character with every bit as much clarity as the more animated performances around him.

Finally, as Susan, who seems as much ill at ease in the company of the others as she is with her anxieties about her daughter’s party, Claire Fisher exploits every ounce of potential in how her character is written. Hers is a more subtle performance, always resisting, as is vital, any temptation to make Susan more dynamic, but is every bit as enjoyable as and leaves as great an impression as her four fellow actors. Overall, the production features five performances that are all terrific in themselves and together, under the assured guiding hand of Vernon Thompson, create a wonderful two hours of theatre.

There are so many wonderful moments or sequences: the dancing (Beverly with Tony, Ange in a world of her own, or Laurence with Ange and Susan); the battles over choices of music and tastes in art, the appeal or otherwise of olives; the betrayals of domestic secrets; Laurence’s determined, almost desperate efforts to find common cultural ground with and an ally in Susan; Ange’s ministrations to Susan; in fact, every exchange between every combination of characters. Added to that, for anyone who has followed the company’s season, there is the enjoyment of seeing individual actors bring to life so diverse a range of characters, nowhere more evident than when enjoying this final production after having seen all five actors in their previous roles. Such a treat to enjoy wonderful writing brought to the stage with such style!