There’s something about a home-grown panto. Sometimes – let’s be honest – that something can be pretty dire, but every year, Swanage Drama Company present the other side of the coin and show just how good amateur panto can be. It’s true that the script of this Aladdin, by Pat Jones and Brian Travers, is full of jokes so corny that they can hardly walk (Widow Twankey on her ambition to wed the Sultan: ‘I want to be his Sultana, but what’s the point of raisin’ my hopes?’), but that is as much part of panto as the principal boy being a girl and his mother being a man. 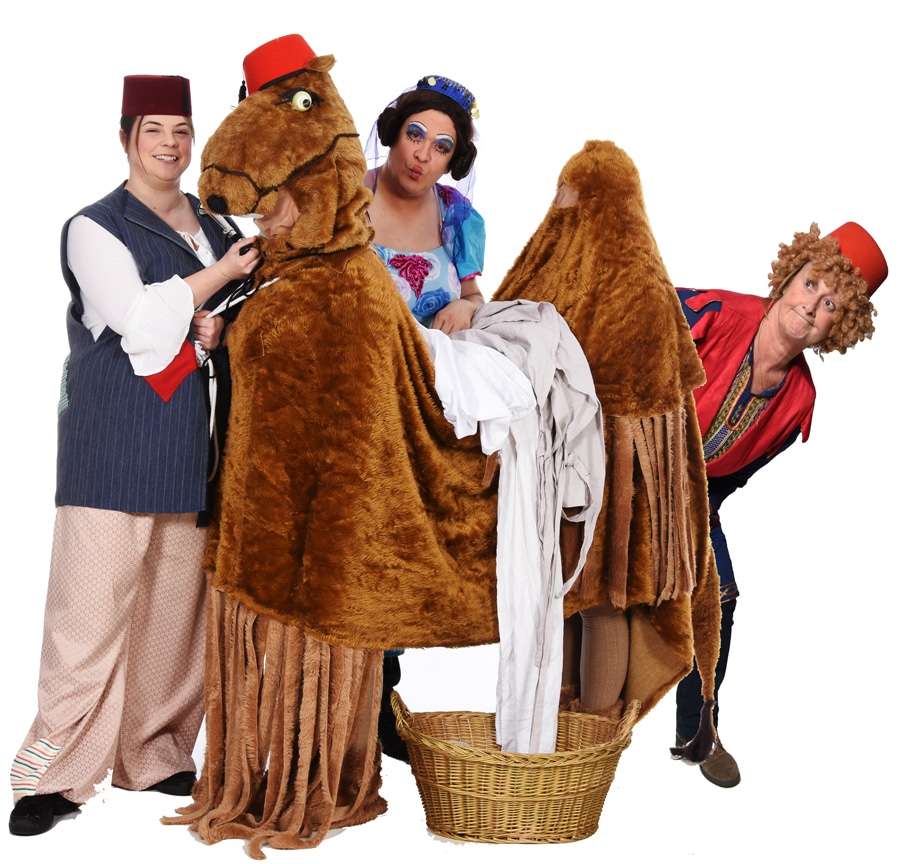 As that principal boy, Hannah Chelton manages to be both hearty and likeable, while Brian Travers plays Widow Twankey with all the panache of someone who has been playing dames for more years than most people in Swanage can remember; his flirtatious rendition of ‘Hey, big spender’ will haunt the dreams – or nightmares – of those who see it. Rosemary Horn as Princess Maria, the object of Aladdin’s affections, is not only pretty and charming but full of character. She has a good voice, too, but that may be largely by comparison, as the standard of the singing is the one thing which is in danger of letting the show down.

James Chelton makes a most genial genie, and mention must be made of Hump, the pantomime camel, whose incontinence provides a running gag – watch out if you are sitting near the front of the auditorium. Stewart Jones shows again what a good comic actor he is as Genghis, Abanazar’s assistant: imagine a Peter Sellers-type Indian played by Manuel from Fawlty Towers. But the stand-out performance comes from Robert Diment-Davies as Abanazar. It is a larger part than is usually given to the villain, but he does not miss a beat and has an authoritative stage presence. He also plays up well to the inevitable boos – oh yes he does.

These principals are well supported by the actors in the minor roles and by a chorus consisting almost entirely of children. Nor are they there just to come on and stand around at the start and end of the show: they are worked very hard and respond with obvious enthusiasm and enjoyment. It must help that their numbers are shrewdly chosen to be upbeat and reasonably up to date, borrowed from the songbooks of the likes of Justin Timberlake, Fleur East, Take That and S Club 7. Most of the children take part in a very impressive dance sequence towards the end of the first half.

The production itself is outstanding, with many imaginative touches from directors Pat and Victoria Jones. The costumes by Anne Peden and Mary Buck are wonderfully colourful and the lighting is not only imaginatively designed by Thomas Curtis but operated immaculately by Lennon Yates. Set construction and painting are credited to Brian Travers and Lennon Yates; I take this to mean that they are responsible for the stunning backcloths, which would not disgrace a professional production.

My own feeling was that some of the scenes would benefit from being tightened up and that the whole thing is perhaps ten or fifteen minutes too long. But try telling that to the excited children around me, who wanted it to go on and on – not a bad recommendation for a panto.