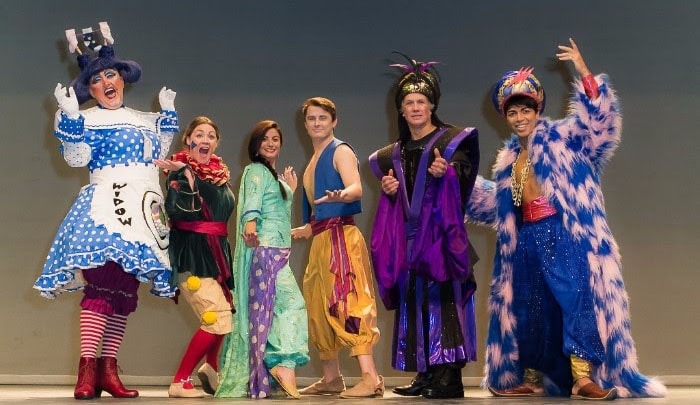 It’s a rare thing for a reviewer to be able to rave about a show, but this fabulous panto deserves the Full Rave not only from me but from my fellow-reviewers (husband and our five-year-old twins).

I don’t suppose anyone needs to be reminded of the story of Aladdin and this version is pretty much traditional, but there are so many delightful deviations that the audience are captivated from the first circus scene (my son’s favourite) to the curtain calls. The music, though not noted in the programme, is (as is now traditional) a bit of something for everyone – modern songs like Meghan Trainor’s bouncy 2016 hit ‘No’ to open and Justin Timberlake’s ‘Can’t stop the feeling!’ to all-round classics like ‘Busy doing nothing’. Many of the most familiar songs are provided by the Genie (Miguel Angel), who feels compelled to impersonate dead rock gods (Prince, Freddie Mercury, Michael Jackson and David Bowie) – and his bravura performance alone is a good reason to buy tickets!

While talking of music, credit must be given to the brilliant Darren Reeves (musical director and co-producer with actor and Blue Peter presenter Peter Duncan), who pulls the entire production together with the most impeccable timing.

The cast are superb – every single one of them absolutely spot on. Mention must be made of Peter Duncan’s Abanazar, a deliciously evil character; he is not so scary as to upset the children, but he certainly gets them booing his every entry. Max Bowden, in the title role, shows his full potential as singer, dancer, actor and even tightrope walker and is the perfect romantic lead for the beautiful Sapphire Elia (Princess XiaoXue) – and no, none of the cast can pronounce it either! Sapphire really does have a gorgeous voice and surely this must be the first of many musicals for her.

No Aladdin would be complete without a Widow Twankey and the brilliant Adam Price confidently fills those size 11 character shoes. He doesn’t steal the show, and in a lesser production he surely would, but here he is part of an exceptional team and the audience love him. Two other roles, Joey Joey and Pantaloon (Chris Larner and Laura Curnick), work tirelessly and brilliantly from start to finish to smooth the scene changes, engage with the audience and provide some slapstick comic relief: a real tour de force.

Costume and sets are lovely and the choreography, set by our local Caroline Barnes, is excellent and at times inspired. The highlight of the show must be the brilliant ‘If I was not in pantomime’, sung by all the principals and a total showstopper – Laura Curnick’s impersonation of Honey G had all the children jumping to their feet to copy the signature move, hysterical with laughter.

Co-produced by Lighthouse and Duncan Reeves Productions  and written by Peter Duncan, this is a fabulous traditional pantomime that all the family can enjoy, with plenty of up-to-date jokes (Brexit and Trump get full honours), lots of audience interaction and participation, a beautiful princess (my daughter loved her) and a happy ending – not to mention deceased Rock Gods. If you only go to the theatre once this festive season, then make it Lighthouse and Aladdin. I cannot recommend it enough.

Children’s comments: ‘I loved the circus, that was the best bit, but I loved the wedding too. Aladdin was my favourite character.’ (Ben). ‘I liked the princess best – especially when she sang opera.’ (Emily)

Aladdin is at Lighthouse until 8 January. For times see www.lighthousepoole.co.uk/whats-on/2016/aladdin/.