I wasn’t quite sure of what to expect from this production: would it be a pantomime, a play with music or something else entirely? Given whatever the Caterpillar was smoking, the liquid Alice drank to shrink herself and the piece of mushroom she was told to eat, perhaps I should best describe the evening as a trip. 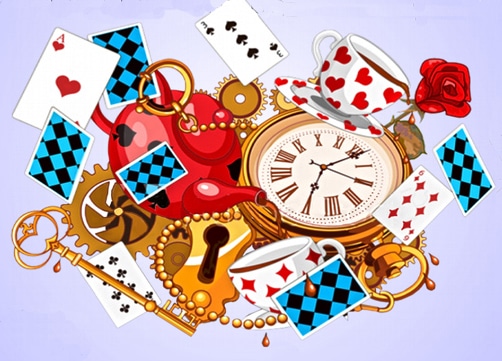 Leesa Agar, making her directorial debut with support from assistant director Sally Whyte, has done a cracking job of bringing the well-known characters and stories to life and the end result certainly proves to be a trip worth taking, with even the tiniest audience members seemingly entranced by the larger-than-life characters. And how lovely to hear Lewis Carroll’s lines and poems that are normally simply seen on the page, or which crop up with surprising regularity in crossword puzzles.

At first I thought that Erica Lakin was going to be a little low-key in the title role, but it wasn’t long until she found her feet and visibly grew in confidence, giving a pleasing well-rounded performance. Acting ability obviously runs in the family, as her younger brother, Charlie, proves to be a very appealing and athletic Cheshire Cat.

There are confident performances from the other youngsters on stage, and I really could not fault the characterisations from the adults; those who particularly come to mind Teresa Miller (White Rabbit), Lucie Evans (Queen of Hearts), Steven Reynolds (March Hare) and Nathan East and Harriet Cairnes (Tweedledum and Tweedledee). I was also very taken with Peter Ansell as Humpty Dumpty and Mock Turtle, although I am seriously confused as to why the latter was wearing what was almost certainly a pig mask, a little online research having failed to turn up any pictures of the character exhibiting similar features.

The down side of the production is that it is made up of no less than fourteen scenes with a plot-slowing blackout between each one, but the necessary changes are made swiftly and on each occasion when the lights came back up, we had the opportunity to admire once again Bethany Redwood-Pain’s superbly painted psychedelic backcloth, a highlight of the excellent set.

A huge shout-out, too, for the superb props and costumes, and the Alice Band – keyboard, trumpet, flute and drums – whose lovely music made me feel that I was sitting dreamily in a park listening to the sound from a nearby bandstand. Dreaming, no doubt, of shoes and ships and sealing wax, and cabbages and kings, and why the sea is boiling hot, and whether pigs have wings….