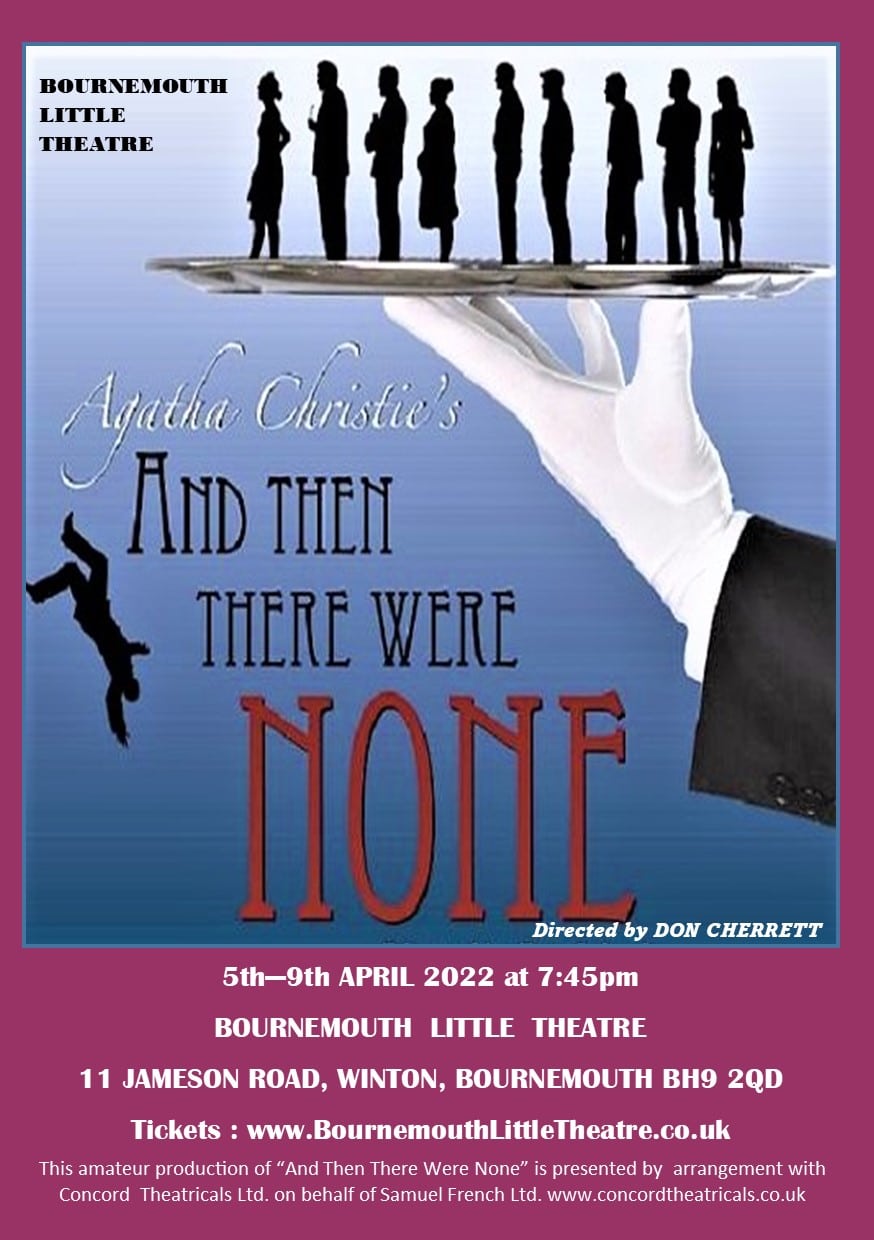 Literary snobs may look down their noses at the detective novel, but they have to admit that the best writers in the genre are incredibly ingenious. There was none better than Agatha Christie, and none of her novels was cleverer than Ten Little Soldiers, on which And Then There Were None is based. Ten strangers gather on an island, invited by a mysterious Mr Owen, who knows a guilty secret about each of them. One by one they are murdered, in an atmosphere of mounting tension and terror. Just as no-one (except perhaps visitors from Hicksville, USA) goes and sees The Mousetrap without knowing whodunnit, so most people who go to And Then There Were None will have seen the play or the film or read the book. Part of Christie’s genius is that both plays are enjoyable, even if you do know the answer to the puzzle, because of her skill in creating a mood.

The full expression of that skill requires accomplished ensemble playing, which this production provides in full. There are some outstanding performances, and it is a spine-tingling experience to watch the characters move from holiday mood to mild puzzlement, then to apprehension when a recording that lists their misdeeds is played, then to fear as the deaths begin, and finally to horror as the survivors realise that the murderous Mr Owen is in fact one of them.

In many ways Vera Claythorne, hired as the Owens’ secretary, is the most normal character and is at the centre of the play as her calm efficiency dissolves into panic. Martha Jenkins puts this progression across most effectively. She shows up Emily Brent, a Bible-basher who disapproves of anything modern, as the hypocrite she is; Emily is played with appropriate odiousness by Denise King. Adam Stoddart’s role as Anthony Marston is brief (spoiler alert: he is the first victim), but it is a rather winning cameo, a cross between a Hooray Henry and Mr Toad.

Lee Tilson dodders convincingly as General MacKenzie, whom the tension soon sends batty, while David Maxwell as the nervous nerve specialist, Dr Armstrong, has the gift of reacting naturally to the other actors and puts in a notable performance. The butler/cook couple of Mr and Mrs Rogers are rather colourless, thankless roles, but Peter Smith and Judy Garrett do what they can with them.

The script – and this production – is dominated by three male roles. Sir Lawrence Wargrave, a High Court judge, is correctly played by Peter Court as austere and grumpy as he applies his analytical intellect to solving the mystery of Mr Owen. William Blore is a retired detective but must have been a fairly useless one to judge by the way he suspects someone different every time he opens his mouth; Bob Rankin hits just the right note of bluster and unjustified self-confidence. Barry Gray has a natural stage presence as the smooth Philip Lombard, who smarms his way into Vera’s affections.

Part of the fun of watching this play is spotting the model soldiers disappear one by one as the death toll mounts. In this production they are toy soldiers lined up on the mantelpiece, and I have to say that I did not spot one of them being removed. A bigger feather in director Don Cherrett’s cap is the very effective opening and curtain call – but to reveal their details would be as much of a spoiler as giving away the identity of the real culprit.

And Then There Were None is at the Bournemouth Little Theatre until Saturday 9 April at 7.45pm each evening.