Annie is the story of a feisty young orphan who is living in poverty in a run-down orphanage under the dubious ‘care’ of the child-hating, autocratic, liquor-swigging Miss Hannigan. She is offered an unexpected way out of her dire situation when wealthy billionaire Oliver Warbucks decides to take in an orphan for Christmas. Annie finds that she is, for once, in the right place at the right time when Warbucks’s personal assistant, Grace Farrell, picks Annie as the lucky recipient of his invitation. 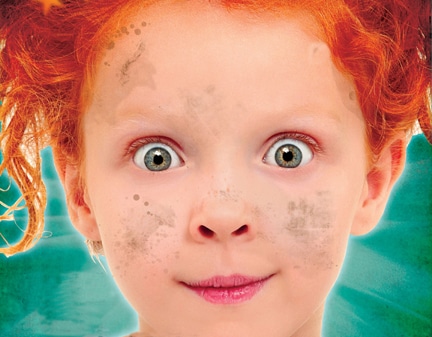 The younger cast members have been divided into two teams, Team Yellow and Team Blue, to perform on alternate nights. It is a shame that it is not made clear which team is performing on which night; I apologise if I have incorrectly deduced it was the Yellow Team who captivated the audience during the opening night’s show. Each child maintained a clear, individual, spirited character throughout, from the excellent Francoise Western in the title role to the youngest, cutest Molly (Teia Gardner). All nine youngsters are totally engaged and focused, full of energy, enthusiasm, discipline and winning smiles; the choreography and their enthusiastic vocals and coordination during ‘Hard knock life’ and the children’s reprise of ‘Fully dressed’ reflect the camaraderie of a close-knit group of orphans, mirrored by the obvious teamwork between the young performers. I have no doubt that, under the direction of Martyn Knight, Jeni Colton and (MD) Liz Weager, Team Blue will show the same level of commitment, enjoyment and zest when they take the stage.

Western captivates the audience as Annie, showing spirit in her defiance of Miss Hannigan, self-assurance when she meets the initially remote Warbucks and vulnerability in her fruitless search for her parents. She is poised throughout her dance numbers, sings with confidence, assurance and understanding, and portrays very believable relationships with her fellow-orphans, the members of the Warbucks household and Roosevelt’s cabinet, whom she charms. The connection between adorable stray canine, Sandy (Guinness appears totally at ease on the stage!), and Western provides a double ‘aww!’ factor.

The adults were not to be outdone, from the principals to the chorus members with memorable cameos. Russell Haugh is less brash and vociferous initially than other portrayals that I have seen of Warbucks, but he brings a vulnerability and sensitivity to the role that creates a much more rounded and credible character, with rich vocal tones and a genuine warm rapport with his young co-star. Subtle and affectionate expressions show a tenderness in Warbucks’s emotions towards the two ladies in his life. There is a flicker of a more personal connection with Grace, implying that their relationship might further develop to provide Annie with the real family that she craves. Jordan Leach is mesmerising as Grace, every movement full of purpose and intent, bringing compassion and kind-heartedness to what is often portrayed as a more clinical role; she is very credible and endearing as a mother-figure for Annie.

The costumes and scenery deftly reflect the contrasting poverty and opulence of 1930s New York and work well; however, some of the scene changes seemed to drag on a bit, but these will hopefully become more slick during the run. The one area that did grate with me on opening night was the sound balance. Some pitching issues were possibly because the singers couldn’t hear the fine orchestra properly, with over-amplification of their own voices over the music; sometimes the volume seemed to be too loud and became harsh and shrill, while at other times dialogue of un-miked voices was overwhelmed by the music, but hopefully these issues will also be resolved during the week.

Overall, this is a delightful feel-good production – full of life, vigour, excellent characterisations, choreography that brings out the best in the entire cast and great musicality – which deserves to be a success.