Annie is a show that can be put on adequately by any reasonably competent group, but so much is good about it that it really flies in the hands of a company brimming over with talent, enthusiasm and technique: a company like Swish of the Curtain, in fact. It is a ludicrous story – sweet little orphan sees nothing but good in everything, gets to meet Franklin Roosevelt and, by singing to his cabinet about how the sun will come out tomorrow, is the real inventor of the New Deal – but somehow its daftness is part of and even accentuates its charm. 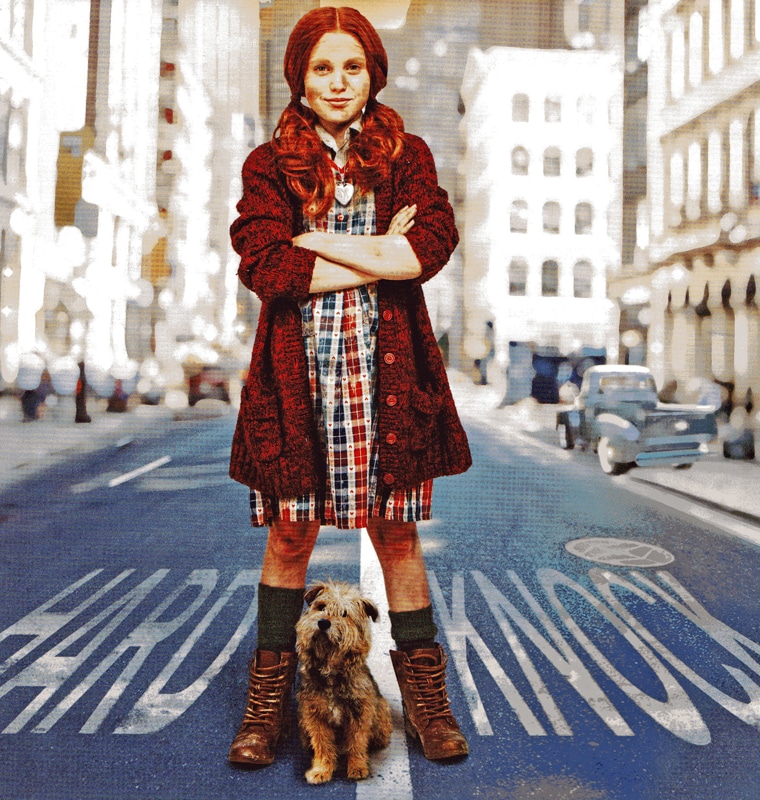 During the eight performances, four groups will play in two each and two groups will play in four each, while some parts are played by the same actor or actress throughout the run. A reviewer can only comment on the performance he sees, and no doubt Carenza Burt is an excellent Annie, but on the night I went, the title role was played by Kyra Partridge. It is a huge responsibility, virtually holding the whole show together, but twelve-year-old Kyra carries it off with great aplomb. She handles dialogue well and belts out the songs, including a pitch-perfect ‘Tomorrow’: a much harder song to sing well than it sounds. Some Annies are saccharine-sweet and yukkily precocious, but Kyra skilfully avoids this trap, while still creating a thoroughly likeable character.

As her saviour, Oliver Warbucks, Ollie Slee maintains his authority throughout and also has a particularly pleasant singing voice. His secretary, Grace, is a sweet character and Sammy Toms (sharing the part with Tempest-Rose Bailey) conveys both her efficiency and her affection for Annie. Lewis Edgar (alternating with Harvey Walsh) brings lots of energy to the scheming Rooster, while Arthur Janes camps it up as the butler, Drake, to his and the audience’s great enjoyment.

The show is nearly stolen by Charlee Crutcher as wicked Miss Hannigan, wardress of the orphans’ home. She is a seriously accomplished actress with a gift for comic timing and can also deliver a song, as she shows with ‘Little girls’. The group of younger actors playing her charges on the night I went did a fine job, simply by bringing to the stage a bubbling over of enthusiasm and enjoyment. One of the orphans, Molly, will be played by three actresses across the run (it would have been four, but one of them was called into the West End run of Andrew Lloyd Webber’s latest musical); if nine-year-old Gabrielle Parsons can bottle the stage presence she showed as Molly the night I was there and bring it out whenever needed, she has a bright career ahead.

Director Tina Witham has not only achieved a logistical miracle in bringing so many elements together, she gives us a production full of movement and interest. Caroline Barnes’s choreography is imaginative and precise, especially for the older performers in numbers like ‘I think I’m gonna like it here’ and ‘NYC’, but the younger ones have their moment with ‘You’re never fully dressed without a smile’; the principals dance notably well, too.

The band under Jonathan Prentice is excellent, but is part of my one criticism of the show: it too often drowns out what’s happening on the stage. This is particularly bad when it is playing over – that should be ‘under’, of course – dialogue. Much of the opening scene is completely inaudible, including the splendid ‘It’s the hard knock life’. The under-rated ‘Something was missing’ is beautifully sung by Ollie Slee as Warbucks – I think, but I can’t be sure because I caught one of his notes to ten of the band’s. No sound designer is credited in the programme but he or she should get together with the musical director fast and sort it out for the rest of the run. It makes one heart bleed that this technical failing so badly lets down the efforts of the children and young adults on stage, who are working their socks off to give us what in every other respect is a terrific show.