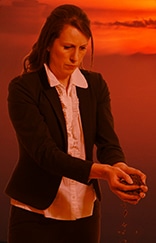 Antigone is a Greek mythological tale about power, status, honour, dysfunctional families and the struggle between the individual and those in positions of authority. Antigone, daughter/sister of Oedipus and his mother/lover, Jocasta, witnesses the deaths of her two brothers in battle: one, Eteokles, dies while defending the city when attacked by the other, Polyneikes. Antigone’s uncle, Kreon, declares that Eteokles should be awarded a burial with full honours, but that Polyneikes should be left on the battlefield where he fell. Antigone is horrified by this declaration and defies her uncle, his declared law and the power of the authorities to ensure that her disgraced brother should be laid to rest with respect – but there are dire consequences resulting from her actions….

Antigone may well be considered an irrelevant, ancient Greek tragedy (written by Sophocles in around 441BC), but its running themes show just how little Man has fundamentally changed over the centuries. Anne Carson’s new translation may bring the language bang up to date (irrespective of the references to ancient Greek gods), but the underlying tones of war and conflict, absolute power corrupting absolutely, hierarchical battles, sibling squabbles, idealised parents becoming flawed humans in the eyes of their maturing children: these are all as topical today as they were in Sophocles’s era.

The Maskers Studio is an intimate, almost claustrophobic, venue. Here the audience sit one row deep in the round, with the actors speaking not just to each other, but also directly to the audience, at times breaking any conventional spatial barriers by alighting a hand on a shoulder, or getting up close and ‘in your face’ with an individual in the audience. But nothing brings the intimacy and entanglement of the audience into the production more than the opening few minutes: after a brief radio narrative has set the tone, the dynamic and vivid lighting and sound effects combine to immerse the audience in a war-torn atmosphere, similar to the effects in the opening of Saving Private Ryan. It may not be as graphically illustrative, but the pictures evoked in your imagination by Tom Foyle and Jamie McCarthy’s first-class respective lighting and sound designs bring the horrors of the unfolding events uncomfortably to life; shivers definitely ran down my spine, the hairs standing up on the back of my neck, and the horrified expressions of some other audience members brought it vividly home.

Having grabbed your attention from the very start, the outstanding performances by the small ensemble (under the skilled, precise direction of Ken Hann) keep you totally gripped until the very last moment. The pace is excellent – dynamic with virtually every movement full of intent and purpose – but the moments of stillness and directed pauses are also perfectly timed and placed. There is usually a safety of distance between the actors on stage and audience in the auditorium, but here there is nowhere for the actors to hide when in such a close proximity to the audience – and when the set comprises of just one small rostrum and one hard chair, they are even more exposed. The level of focus, commitment and engagement from the whole group is nothing short of superb. Many Studio or Green Room productions that I have seen have been like being a fly on the wall; here it is taken a step further as the audience becomes immersed in the production and an integral part of it.

Sarah-Jayne Wareham is entirely captivating as Antigone, running seemingly effortlessly a whole gamut of emotions including anger, grief and defiance with her physicality, vocal strength and depth of characterisation; the sibling relationship she shares with Kate Grundy-Garcia as her sister, Ismene, is complex and intriguing (the epitome of being unable to live peaceably with each other, but rallying in defence of each other when the chips are down).

Matt Avery’s portrayal of the zealous, power-crazed King is equally mesmerising as the oily politician (his gentle, smiling face masking the cruelty of his words), displaying arrogance, bullying, pomposity. He is dangerous because he passionately believes that his way is the right way, but then starts to unravel emphatically as events and his hand in them evolves. Avery commands the performance space with a powerful, assured, dynamic depiction of the despot King.

Of the other supporting actors, special mention should be made of Eric Petterson’s charming and multi-faceted characters; he has a very naturalistic approach that delivers totally credible characters who can leave a touch of humour in an otherwise very dark tale, displaying belligerence, fear, insubordination and submission with seamless flair and panache.

This isn’t a jolly night out at the theatre, but it is utterly compelling and memorable: a masterclass in the modern telling of an ancient classic.