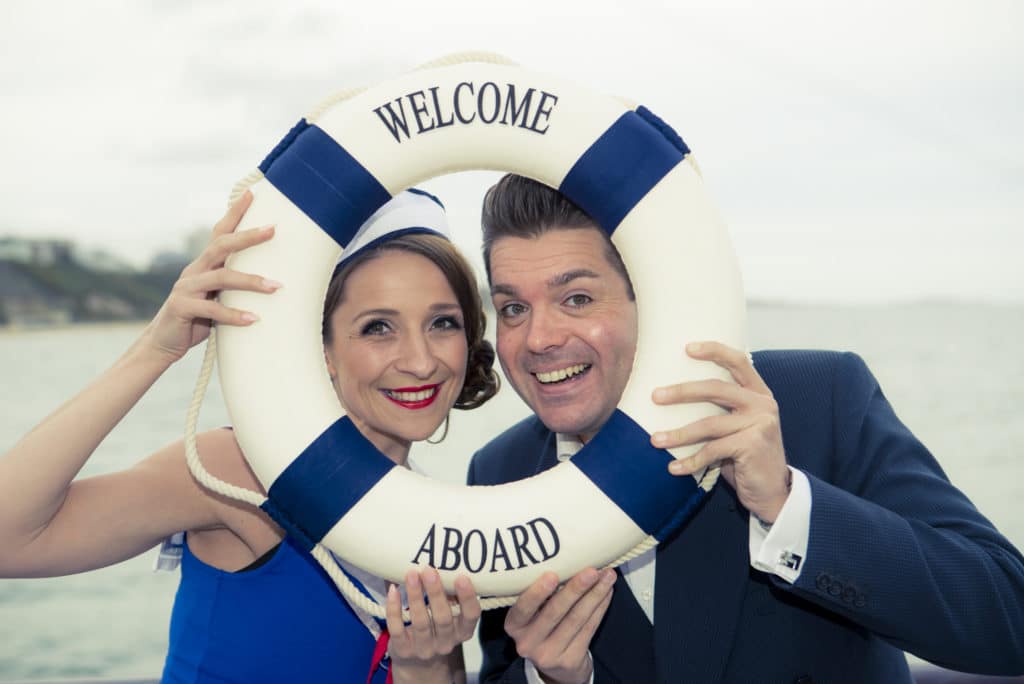 Anything Goes is set aboard luxury ocean liner SS American, where nightclub singer/evangelist Reno Sweeney is en route from New York to England. Her pal Billy Crocker has stowed away to be near his love, Hope Harcourt; unfortunately, Hope is engaged to wealthy English Lord Evelyn Oakleigh. Joining this love triangle on board are Public Enemy #13, Moonface Martin, and his sidekick-in-crime, Erma. With the help of some elaborate disguises, tap-dancing sailors and good old-fashioned blackmail, Reno and Martin join forces to help Billy in his quest to win Hope’s heart.

I’ve not seen a show by BMT Productions or visited the Regent Centre before, but I confess that I love Cole Porter’s music and witty lyrics and Anything Goes is one of my favourite classic musical comedies; I was therefore somewhat nervous about what to expect from the ‘unknown’; I need not have been at all concerned.

From the pre-show announcements, the mini scene on the forestage and the accompanying lively, rich opening bars of the ‘Overture’, it is clear that this is a warm and engaging production to enjoy. Written and set in the 1930s, the art deco interior of the Regent helps to bridge any gap between the audience and the actors, but it is the quality of the performances from the strong principal line-up, enhanced by the quality in depth from the entire ensemble, that makes this such a cohesive production.

BMT Productions state in their programme that part of their main ethos is to “develop and nurture local talent” and this is indeed in evidence, although both Jamie-Lee Mason (Reno) and Rossano Sal (Billy) have professional credentials in their backgrounds, evident in certain stylistic aspects, confidence, poise and stage presence, and may well have helped to bring out the excellent performances of the entire company. Mason has a terrific jazzy and bold voice, full of musicality and the calibre of her dancing is unquestionable, while her comic skills in Reno’s sassy character are also in abundance. Likewise, Sal’s comic timing and delightfully rich, seemingly effortless, tenor tones do full credit to Porter’s wonderful songs as he commands the stage.

Rob Arrowsmith is superb as Moonface; his energy, comic timing, characterization, accents and theatricality are hilariously brilliant. Rosina Crew (Hope) makes a bright debut performance for BMT Productions; her rendition of ‘Goodbye, Little Dream, Goodbye’ is poignant, full of naivety, innocence – and beautifully sung; she has much potential to develop further. Rachel Boucher may be new to musical theatre, but she is a natural; her sassy, charismatic interpretation of Erma is again full of exciting potential, her voice has a brilliant quality and she has a lovely flair for comedy. Michael Boucher (Luke and Sailor 1) is another one to watch for the future, making his BMT Productions debut with tremendous stage presence and assurance.

Tony Lee (Eli Whitney) and Oliver Faulkner (Lord Oakley) both give memorable comic performances but in very different ways. Lee is a sheer delight as the “old, short-sighted alcoholic”, bringing a touch of Jimmy Durante to the stage, while Faulkner manages the difficult balance of playing comedy ‘straight’ to maximum effect before tipping over to more overt slapstick, with a character that becomes an engaging combination reminiscent of both George Roper and Niles Crane!

James Dixon-Box’s direction and choreography brings everything together magnificently, ensuring great attention to detail, a variety of choreographic styles suited to both the music and cast abilities, and slick pace, but is also not afraid to have well-structured pauses and changes of dynamics. Costumes and hair are also perfect for the 1930s. The company dance numbers are of the highest quality and my personal favourite numbers of the show, ‘Anything Goes’ and ‘Blow, Gabriel, Blow’, are brilliantly performed with high energy, sharp timing, stamina and panache, both vocally and physically. The orchestra, under the skilled attention of Musical Director James Stead, sound wonderful and fully deserve the enthusiastic applause they received on opening night. Stead also ensures that the ensemble’s harmonies and diction are of an exceptional standard for an am-dram group, as are those of the principal line-up, and make this a fabulous musical as well as comic production.

Not all was plain sailing on opening night, however, with some minor technical issues with mics and a few sound and lighting transitions that seemed to be rather choppy, but the sound effects themselves and balance between voices and instruments are excellent, and lighting states and effects are very atmospheric; I’m sure these will lead to very smooth sailing the remainder of the run.

Despite these few technical glitches, the polished performances from the entire cast and orchestra (not a weak link between them) ensure that this is a great evening of charismatic musical comedy – overall an evening of champagne musical theatre, full of effervescence and fizz; enjoy!