This week saw the opening of the rebranded, refurbished, spun through ninety degrees and replacement of buttockly-aching bench seating (with, well, more buttockly-aching bench seating) Sherling Studio at Lighthouse, Poole, with the world premiere of Caridad Svich’s new play, Archipelago.  New undertakings all round as it also marked the directorial debut of the recently appointed Lighthouse Artistic Producer, Stephen Wrentmore.  Although touted as a world premiere, Archipelago has received readings across venues in America from as early as 2013, sometimes under the direction of Mr Wrentmore, and has been the subject of a Russian translation. 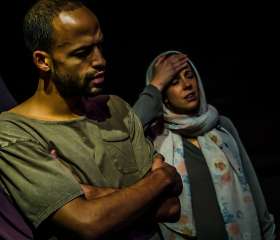 ‘Like the great writers who went before her, Caridad is interested in the bigger, deeper themes…I see in her work the bloodline of the classics: there is Sophocles and Lorca, Shakespeare and Lope de Vega, Pinter, Caryl Churchill and Howard Barker…I see the same deftness of touch, the same perception of life, the same scalpel cut of truth.’ Lofty praise indeed from director to playwright.  It would be tempting to refer to this as hyperbole but that would suggest that it’s not supposed to be taken literally.

Likewise, in the e-publishing periodical subscription service, StageReads, editor Meredith Lynsey Schade explains: ‘… the story of two lovers, brought together and torn apart over time and space.  Meeting somewhere in the in-between during tumultuous times…two people who are desperately trying to connect…exterior and interior barriers are erected and destroyed in each encounter, as they journey towards self-realization through love.’ With such ostentatious flurries of highfalutin eloquences how can it fail to impress?

Well, let’s use a footballing analogy to try and explain this: it was a game of two halves.  Clever, really, as it ran without an interval.  Like the film Titanic, Archipelago impressed visually.  The set, designed by Yoon Bae, extended from floor to ceiling like a death-drop slide, prematurely terminated, extending into semi-circular, crazy paving flooring.  Its limewash effect allowed projections to be displayed at the rear of the stage.  With a clever lighting design by Ace McCarron, both features worked well together.

The unfortunate thing about Titanic was that no matter how visually good it was, the script just couldn’t carry it and with Archipelago we have much the same problem.  Some of the language flowed with a poetic deftness, but this did little to endear you to the characters.  When referencing the playwrights above, what has been forgotten is that they created characters we cared for, felt something about and could related to.  For the characters in Archipelago I felt nothing, just a cold, simmering annoyance with their pretentious, middle-class over-analysis of a relationship that failed to ingratiate.  Indicatively, I spent far too much time wondering why one of the actors had two plasters side by side on adjacent fingers.