The Salisbury Playhouse pantomime is an important part of Christmas celebrations for many people, whatever their age, and this year’s production of Beauty and the Beast is a wonderful and sumptuous treat – with everything to be expected of a pantomime included: humour, song, dance, beautiful sets and costumes and plenty of audience participation, plus a happy ending of course – this production is just perfect!

Fairy tales are essentially wondrous and magical stories that can be reinvented with each retelling. Beauty and the Beast has been masterfully reinvented by Walt Disney in recent years, whereas before Disney there were many other versions – perhaps most notably the French La Belle et la Bette by Gabrielle-Suzanne Barbot de Villeneuve in 1740.

This Salisbury Playhouse Wiltshire Creative production continues the tradition with a new retelling loosely resembling the de Villeneuve story, with a fair sprinkling of originality, and updated for present times. It features the familiar storyline of a beautiful and caring girl, the daughter of a merchant who falls on hard times, who is taken prisoner in exchange for her Father by an enchanted prince who has been turned into a Beast by a sorceress. Over time, she grows to love the Beast, which results in the lifting of the enchantment and turning him back into a handsome prince. Now add Paris as the setting, Cupid as the narrator and his efforts to bring the heroine Amorrette together with the hero Prince Friedrich of Bavaria; and the story becomes a pantomime.

Needless to say a pantomime requires a Dame and other comedic characters and these are introduced as not one but three love stories develop – there’s Amorette and the Beast, her Father, Monsieur Marzipan, who falls for Dame Betty Bon Bon, and Amorette’s sister Soufflé and Cupid, who gives up his wings for her! Oh, and not to forget the interventions of Spite, a wicked Enchantress who put Prince Friedrich under the spell in the first place and does her evil best to stop the spell from being broken.

Even before the show begins the knowing children and adults alike in the audience brim with anticipation as they see a brightly coloured stage featuring neon cupid’s arrows and shimmering pink roses. As the show opens they are rewarded with familiar popular songs and a performance of high energy and fast pace. The production is crammed full with contemporary references, one liners, double entendre and silliness.

The excitement of the children was contagious and they, as well as the adults, were soon swept up in the fun and drama. The enthusiastic audience took every opportunity to participate.

The cast were extremely accomplished actors and all were excellent singers as well. The version of ‘A Million Dreams’ from The Greatest Showman was sung superbly by Liberty Buckland as Amorette, and you will never hear a ‘sweeter’ version of the ‘Can Can’ than the one sung by Dame Betty Bon Bon (played by Richard Ede who is living proof ‘there ain’t nothing like a dame’).

The costumes were very imaginative and colourful, especially the many confectionary themed costumes for Dame Betty Bon Bon. A lot of work and effort has clearly gone in to designing and making them. Amorette was dressed plainly at the beginning of the play but was transformed by a succession of nursery rhyme and Disney Princess style dresses once the enchantment began.

This review would not be complete without mentioning the superb and clever set, lighting and props which offered surprises throughout the show – who knew the trap door could be used so extensively! There was plenty of glitter, dry ice and even fireworks to add to the sparkling production.

The excellent musicianship of the band needs to be mentioned, as does the tremendous performance of the Red Roses young dancers.

Writer Andrew Pollard, director Ryan McBryde and designer James Button and the rest of the Production Team are to be congratulated on yet another superb pantomime.

Grab a ticket for this year’s show if you can. Beauty and the Beast will run until 13 January 2019. 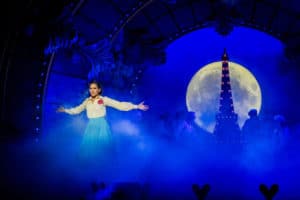 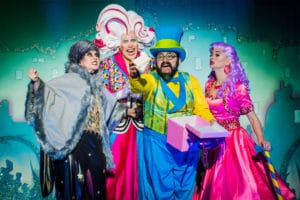 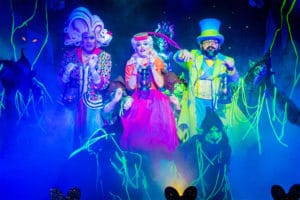 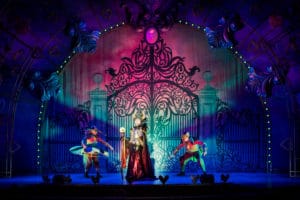