They were formed only just over a year ago, but Viva Voce can now add the words ‘award-winning’ to any publicity material, having done rather well in this summer’s Bournemouth Music Competitions Festival and walked away with three distinctions, a first place, a second place and a silver cup; having sat through this concert, I can quite understand why.

With this choir, it is not just the extremely high standard of singing that sets them apart, but the neatness and uniformity of their appearance, their obvious enjoyment in what they are doing and their total involvement in both words and music. Add to that some stunning arrangements that have been sourced by musical director Jean Chambers and great playing from accompanist Mary Potter, and it soon becomes obvious that Viva Voce are a force to be reckoned with. 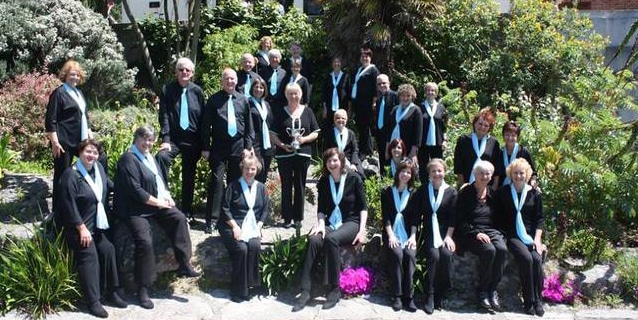 I don’t think I have ever come across quite so eclectic a programme, from pleas for an Indian summer with ‘Blue skies’, ‘Bring me sunshine’ and ‘You are the sunshine of my life’ to a wonderful warm arrangement of Billy Joel’s ‘Lullabye’, a cross-dressing Steve Potter with the hilarious ‘Lime Jello’, the glorious Sanctus from Fauré’s Requiem and a foot-tapping medley from Jersey Boys – and that was just in the first half-hour or so. As the first half drew to a close, I found myself welling up as we listened to the superbly sung ‘This is the moment’ (Jekyll and Hyde) and a wonderfully arranged Les Misérables medley that incorporated some fine solo work as well as glorious ensemble singing.

Mary Potter’s lovely arrangement and playing of ‘Autumn, with the promise of Spring’ proved a memorable opening to the second half, moving on to more foot-tapping with a Gershwin swing set and ‘Boogie-woogie bugle boy’ before we were treated to more laugh-out-loud moments with Maxine Davenport’s gorgeous performance in ‘The ballad of Barry and Freda’, perhaps better known as Victoria Wood’s ‘Let’s do it’.

The traditional ‘Steal away’ brought a quieter feel to the evening, setting the tone for ‘Tell my father’, taken from a musical hitherto unknown to me: The Civil War: An American Musical. This was sung by the men and although there were only seven of them, the sound was absolutely beautiful and showed that they were all listening to each other – as all good singers should, of course!

A few songs later and all too soon, this lovely evening drew almost to a close with a delightful arrangement of Rodgers and Hammerstein’s Broadway shows such as The Sound of Music, Oklahoma, Carousel, The King and I and South Pacific, again incorporating some fine solo work and causing our poor overworked feet to tap even more – as they continued to do during the encore, ‘Alexander’s Ragtime Band’.

This first-class concert will be repeated at Merley House, Wimborne, on 30 September and at the Shelley Theatre, Boscombe, on 7 October.