If you think by going to this production, you are going to get another version of Frankenstein, the classic Gothic horror story, think again. This play by Liz Lochhead is much more of a deep investigation into the lives of some of our most famous, infamous writers, philosophers and politicians. In that respect, it is a very ambitious play. Is a play in fact the right medium at all for this subject matter? Please believe your humble critic here: I had done my homework, re-read the novel, watched a video and mugged up on Wikipedia. I was intrigued to know how this could be turned in to a drama.

Chesil starts off with a brilliant set, designed by Duncan Wilson, that incorporates the actual masonry of the chapel as a backdrop. Curved sofas and candlelight add more atmosphere and lead us to the veiled eyrie where Mary Shelley looks back on her turbulent life. Does this structure echo the lightning conductor by which Frankenstein’s monster came to life or is it more prosaically the ivory tower for writing to which she retires after Shelley’s death? 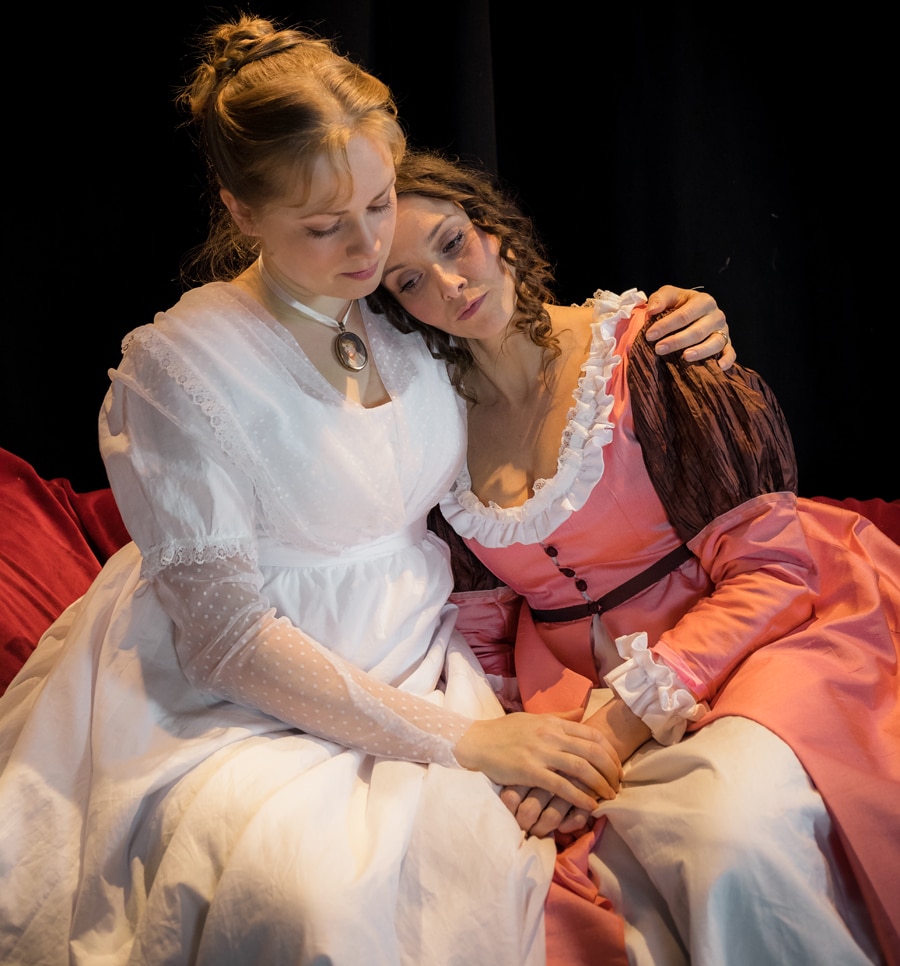 Whatever, you need to keep your wits about you! The pattern of the play is one of retrospects, Mary retreating to that tower for her reflections, interspersed with re-enactments on the stage floor below. Thus a youthful Mary, played by Eleanor Marsden, enjoys young love with Shelley, played by Tom Maggs. They are almost in love with love, it seems, and superficial for that, but as the play progresses, their characters deepen and as actors, they grow into that maturity extremely convincingly.

What cannot develop in this play is the voice-over of the monster. Quite what is the purpose of this device remains unclear. Is it to highlight the relationship of responsibility between the creator and the created? And while on the subject of the monster – which remains, whether she would or no, Mary Shelley’s abiding legacy – from where exactly did this inspiration come?

Byron, on the other hand, played by Tom Dangerfield, has a much clearer role: to be the explosive, dynamic, sensual advocate for free love. This demands exceptional magnetism and certainly when he attempts to seduce Mary herself, despising Godwinism force-feeding the world freedom, he scarily achieves that.

His selected lover at the time, Claire Clairmont, played by Joanna Russel, has maybe an easier role as the somewhat ditsy girl in love with the mad, bad and dangerous to know Lothario and yet, towards the end of the play, when neglected by Byron, she learns of the death of their child, Allegra, in convent care, you feel enormous empathy for her.

Elise (Zoe Hare), the maid to the Shelleys, similarly starts off in a limited role but when told by Mary Shelley, the would-be advocate of free love, that she must marry the father of her expected child, Elise exposes with dynamic persuasion the hypocrisy of this sentiment. Zoe manages a pretty fair French accent too!

And so this complicated history unravels. Who slept with whom, why, in what cause, what were the consequences? It is hard to keep up. Mary says her heart has been turned to ice by her suffering. Is this the ice of the title? Or is the ice the wasted landscape into which Frankenstein’s monster disappears in her novel? Or is the ice that of an intellectualism which deprived Mary of a loving childhood and led her to sacrifice herself on that inherited altar? Is the blood that of honest passion that does not distinguish between servant and lady, as Byron does not, or is it the blood of the ghastly miscarriages and infant losses that Mary suffered?

A play that leaves you asking these questions is a play worth seeing. Director Alec Walters does not disappoint.