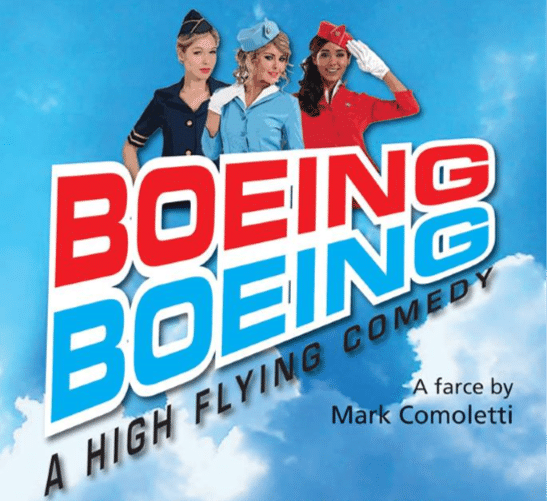 Set in the sixties means that there are inevitable moments of pure misogyny in this fine production: the rather awkward pursuit of young girls by men of a certain age is however given a modern twist with each girl finding their own salvation out of what might be perceived as quite a lurid set up.
Bernard has 3 fiancees, all of whom are air hostesses meaning he can have one up, one down and one pending or so he thinks.
Mat Robinson has taken the brave step of reducing the farcical element and concentrating on character and diction which on the whole works a treat given the amount of laughs generated by an almost sell out crowd. There are the usual number of doors to be slammed and comings and goings using an exceptional set design to allow the inevitable set ups (belief suspending as in all farce of course that the character behind the closed door would hear the others and the wardrobe of the girls located in one bedroom may have given the game away) and misunderstandings to occur.
Glenda Thomas excels as the French Maid Berthe, her facial expressions making immediate contact with the audience, her put downs worthy of any Downton Abbey matriarch and drawing much observational humour along the way.
The three girls are also highly watchable and grasp their lines with vigour confidence and swagger: Jane Russell, Carrie Bellett and Marion Gobin are each full of characterisation, impishly outdoing the men as the web of lies grows larger. Each of their scenes with Dave Smith as the Exeter interloper on Bernard’s schemes were finely executed: he has a knowing way with a script and the laughs and confusion mingled brilliantly with his aghast looks and comic timing.
Rhys Lupton as the master minder Bernard was laid back and suitably arrogantly superficial in his stylised role, cleverly using the word “darling” as both open and scheming reasons in his discussions with the each of the three girls, hiding true feelings behind the usage.
Sound and lighting were perfect, diction superb throughout and apart from a missed telephone cue (beautifully ignored by Bernard), all the room doors remained stoically intact each with a wall papered panel behind completing the illusion. The use of the 60’s air hostess bags was a nice surprise and must have taken ages to source as with the other vintage set props such as the telephone and books on the bookshelf (although I doubt Bernard would have read them: all part of the fakeness image).
Slick and elegantly directed this should entertain audiences all week.