This production of Cats by Highcliffe Charity Players has been highly anticipated. We all wondered how on earth they were going to pull off such a huge musical which is very well known for its exceptional dancing and fully sung through script. I’m delighted to say that they not only pulled it off, they absolutely smashed it!

The theme of the evening was set out brilliantly with Front of House in cat ears and little paw prints on the floor guiding the audience to their seats. It was the little details that counted in this production, and speaking of little details, whoever designed your programme is a whizz. I’ve seen less professional looking programmes in professional productions.

Curtains were open from the beginning, giving the audience a chance to take in the detailed scenery and the beautiful moon silhouetting the sky. The staging was perfect, and was used perfectly by all of the Cats throughout.

Stuart Darling has triumphed with the Musical Direction of this show. The band were magnificent and, despite the fact that they played continuously throughout the show, never faltered. Particularly impressive was the singing talent that was on the stage, and the diction. In the main, words were enunciated well and that helped the audience keep up with the story. My only slight criticism was in the opening song where some of the lines were lost, otherwise the singing was excellent.

This show is predominantly a dance show and therefore strong choreographers are a must. James Dixon-Box and Chloe-Louisa Hughes evidently rose splendidly to the challenge and created a visual spectacle. The dancing was wonderful, everyone was in time, knew what they were doing and most importantly appeared to be having the time of their lives. The dancing talent on the stage was truly mind blowing.

There were so many individuals on the stage who delivered fantastic performances, it seems unfair to name specific people. Everyone stood out in some way and had a moment in the limelight and, even when they were not in the limelight, were reacting beautifully to scenes onstage or were adding little mannerisms to remind the audience that they were cats. It was very hard to know where to look sometimes!

Stand out songs for me were ‘Jellicle Songs For Jellicle Cats’, which had good energy and opened the show brilliantly; ‘The Rum Tum Tugger’, which added some appreciated humour to the show; ‘Mungojerrie and Rumpleteazer’, simply because both cats were exceptional in their delivery of the song and fun to watch; ‘The Jellicle Ball’, which held some of the most outstanding dancing in the show; and ‘Skimbleshanks, The Railway Cat’, because I absolutely loved the makeshift train and how creative it was. To be honest, it was even difficult to whittle it down to those few songs!

Finally, a mention must go out to the costumes, because they were stunning, and the makeup was flawless. 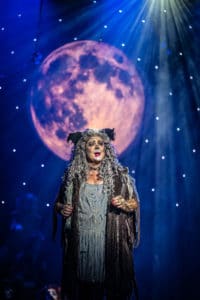 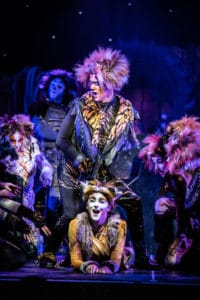 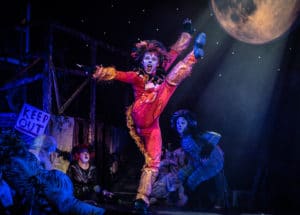 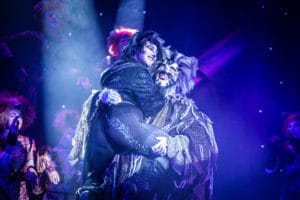 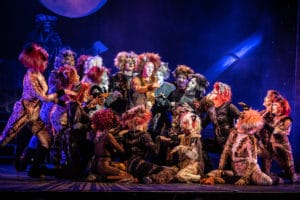