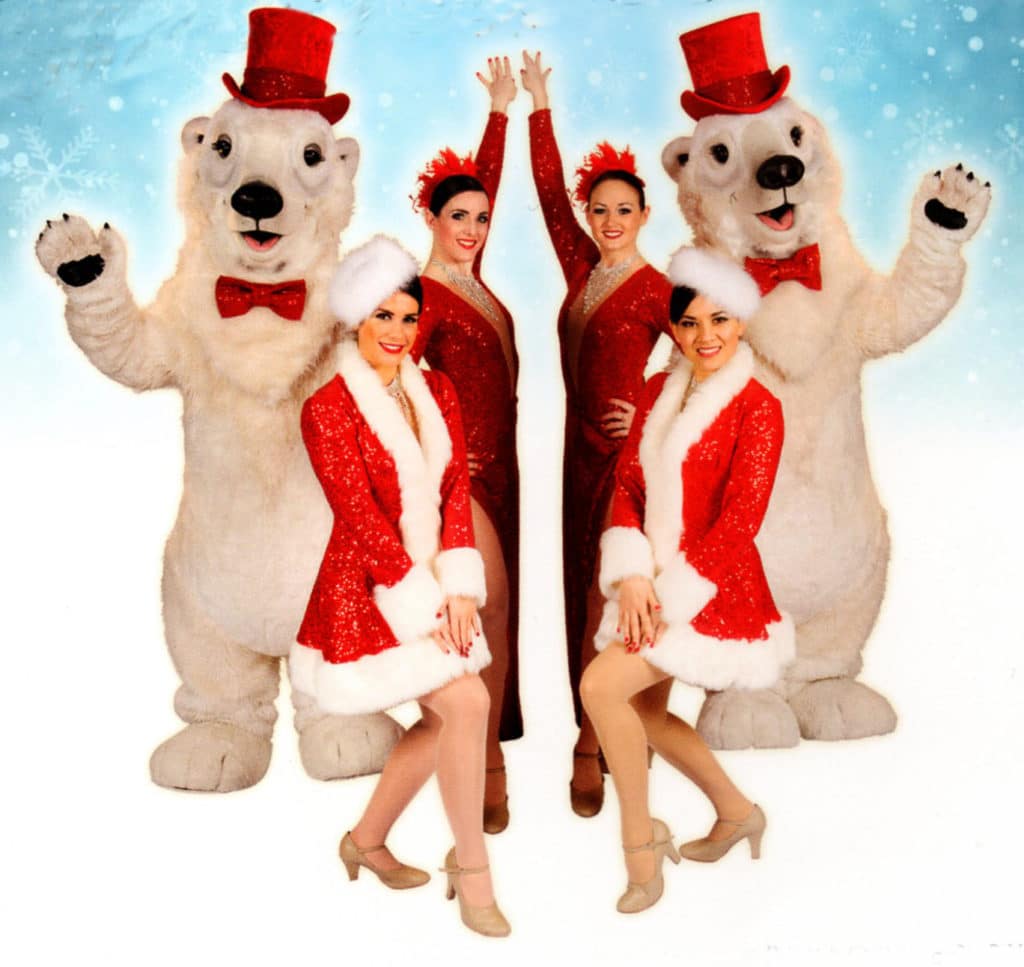 You can’t argue with either of the words in the title of this show: Christmas is coming, and the show itself is nothing if not spectacular. At the same time, there is an intimate, family air about it, and it is a nice touch, but somehow not surprising, to find the cast lining the foyer to chat and say goodbye as one leaves.

Although the set itself is simple and in neutral colours of white and grey, it is only a background for some wonderfully colourful work. Literally so in the case of the fabulous costumes. I didn’t try to tot up how many costume changes the hard-working chorus have to deal with, but there are so many that had I tried, I would have lost count. Then there is the dancing itself: choreographer Carly Simmerling has given the performers a huge amount to learn, but they are immaculately well-rehearsed and work their socks off without any apparent drop in energy levels and without the smiles leaving their faces.

The quality of the singing varies, but Bryan Newman (Santa) and Emily Thomas (Holly) have notably good voices. The sound was not all it might have been so early in the run and there were times when a combination of poor diction and over-loud backing tapes made the words incomprehensible, but this is a show for the eyes rather than the ears, and it was a minor flaw rather than a major problem.

Mark ‘Teddy’ Everitt as Jack F Rost makes a satisfactorily boo-able villain, whose evil ways almost overcome the benevolence of Santa, while Bryan Newman acts as well as he sings (but if he is going to read from a script concealed in his newspaper, he should make it a little less obvious). Inevitably, the small children playing the ‘babes’ could steal the show just by the ‘aaah’ factor, but they also sing, dance and act well. One of the elves, Pippin, is also played by a youngster; the part is shared, so I am not sure if I was watching Finn Wright-Stephens or James Hamilton, but either Finn or James was exceptionally good.

In some ways it is a relief to see a Christmas show that is not a pantomime, but pantos do usually offer more of a plot, and rather more jokes, than this show. Again, it is reasonable to argue that it is more about what you’re seeing than what you’re hearing, but the two are not mutually exclusive and it would be good to think that next year’s offering will be stronger in these departments. However, this Christmas Spectacular is still a strong production, and if you are looking for a festive and thoroughly enjoyable evening, head for the Regent Centre at 2.00 on 17 December, 7.00 on 18 and 20 December, 5.00 on 19 and 21 December or 2.00 or 7.00 on 22-24 December.