If you are looking for a good example of a village pantomime, then visit Lytchett Matravers Village Hall during the run of this new version of Cinderella. It is a typical production of its kind, with local references, most of the audience knowing each other (and those on stage) and village children playing their part as chorus members and in minor roles. It is good in the other sense as well: within the limitations of facilities and talent, it is a slick, well-performed show that is thoroughly enjoyed by the audience and by the cast as well.

Castle Players have been in the doldrums. This panto must be their first production in eighteen months or more, and it would be great news if it were to mark the beginning of their revival. In that case, no-one could take more credit than Linsey O’Neill. A long-time stalwart of the group, she wrote, designed, produced and directed Cinderella – and served coffee in the interval. In the writing she has stuck faithfully to the traditional story, building in some quite good jokes as well as the obligatory groan-worthy ones.

Linsey’s direction is sure-footed and strikingly original in places: the scene in which the ugly sisters’ mother cuts off their toes so that the glass slipper will fit them is comical but would not be out of place in Grand Guignol or Titus Andronicus. Village hall facilities don’t allow the transformation scene to be a spectacular coup de théâtre which leaves you wondering how it is done, so it is kept simple but is accomplished slickly and effectively.

Dave Clements as Cinderella’s father, Baron Stonybroke, in a deafening check suit and with a pair of bushy white eyebrows that deserve an acting award on their own, shows himself a talented comedian. Emma Short is a schoolmarm-ish Fairy Godmother and establishes a good rapport with the audience. The ugly sisters live up to their name, but Simon Langford and Steve Moore are having a great time and their enjoyment conveys itself to the audience. 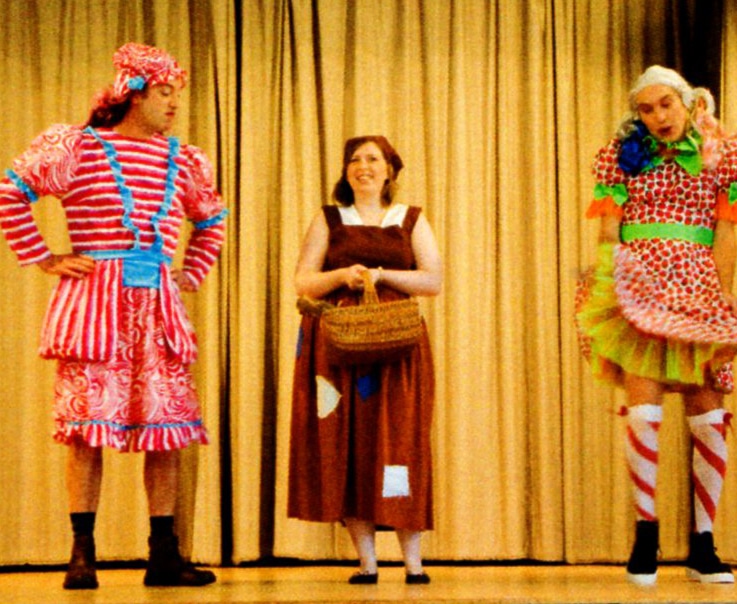 Naomi Butchart is a charming Cinderella but continues the noticeable recent trend of making panto heroines more sparky and resourceful: no drooping violet she. Nikki Cross brings a regal bearing and a slappable thigh to the part of Prince Charming.

It could be said that a traditional Cinderella stands or falls by its Buttons, and Phil McMullen is one of the production’s main assets. Jolly and full of energy, he nevertheless wins the audience’s genuine sympathy for his unrequited love for Cinders. He’s not a bad mover, either.

There is, as in every panto, a good deal of ad libbing and if I have two criticisms, the first is that the cast should observe the two rules of ad libbing: don’t speak over other characters’ lines, and do ad lib confidently, not in a mumble. The other is that the slapstick make-up scene is a bit half-hearted.

No musical director is credited (if it was, I bet it would be Linsey O’Neill) but the music is well-chosen and Naomi Butchart and Simon Langford in particular have high-class singing voices. The ‘wow!’ moment of the show is the superbly sung and staged harmony version of Queen’s ‘Somebody to love’. It is worth the ticket price on its own.

There are some old Castle Players faces on stage but also some new ones. Let’s hope that a new and successful chapter in the group’s history has opened and that the village will realise what an asset it has and support it as it deserves. This Cinderella is an encouraging start.