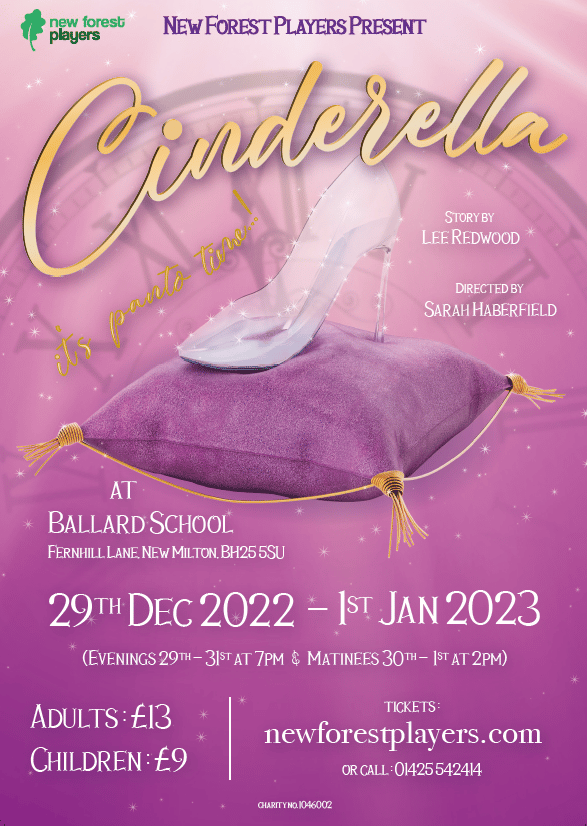 There can be no better way to top off the seasonal festivities than with a family outing to the local panto! This year’s ‘Twixmas’ treat from the New Forest Players is the enduringly popular folk tale of Cinderella, which in English language form dates back to at least the 17th century, following the publication of the definitive version of the story (in French) by Charles Perault. Since that time Cinderella has become the most performed Christmas pantomime as well as being the subject of countless films. The story is so well known that it really needs no introduction here. So the challenge for script writers and theatre groups is to create something that remains true to the original narrative, whilst employing contemporary references and original elements that are appreciated by adults and children today. This New Forest Players’ production does that in bucketloads with an updated and reimagined telling of this heartwarming fantasy, written by Dorset based pantomime maestro Lee Redwood.

It is fast paced with a nonstop stream of slapstick and funny one-liners, with topical content, old chestnuts and risqué innuendo (supposedly which only adults understand), that prompt lots of groans and laughter from everybody. The songs fit like a glove with the dialogue and are a mix of familiar Disney standards and fashionable pop music, including a lively (and loud) rendition of Lady Gaga’s ‘Born This Way’.

Audience participation is a key element of any pantomime and no one should come along to this pantomime unless they are prepared to join in. Yes, everyone is required to boo, hiss and shout out the usual catchphrases with perfect timing.

It’s simply great fun and young and old alike can expect to be captivated by an utterly delightful Cinderella with her dashing Prince Charming. They will also be thoroughly entertained by the comedic maleficence of the Ugly Sisters and the Step-Mother, and the antics of Buttons, the kindly Fairy Godmother and her enchanting animal helpers. If that’s not enough there’s the added bonus of reliable Dandini, hopeless Baron Hardup, Derek (Trotter) the panto Horse and hapless builders Riff and Raff.

It does seem to be unfair to single out anyone for plaudits, nevertheless it would be remiss to not give praise where it is clearly due. Phillipa Hendry in the leading role of Cinderella is faultless in her acting performance and her singing is excellent. Martin Cox, as Buttons and effectively the Master of Ceremonies, was clearly born for the part. He has said he’s “the guy who doesn’t get the girl yet again”, but don’t give up, Martin, because your acting future is a bright one and you never know who this might lead you to. Stand out performances are also delivered by Ian Prescott and Tina Ward who are both brilliantly convincing as the two Ugly Sisters Lavinia and Lucinda (Lav and Loo) and they can be rightfully ‘flushed’ by their success of delivering their funny lines with precise comic timing.

There are just too many performers in this production to mention them all individually, (or as a twosome where Derek the Horse is concerned), but they can all stand up and take a well-deserved bow. They all play their parts to perfection. There are 23 people in the Chorus alone and they dance and sing with exuberance, and the 10 youngsters that make up the Children’s section of the Chorus are simply cuteness personified.

Often in pantomimes the costumes are a major part of the show and this production of Cinderella is no exception. All of the costumes are splendid and completely authentic for the parts of each character. Cinderella’s Ball gown is sumptuous, as to be expected of a fairy tale princess. But probably the costumes deserving of highest praise belong to the two Ugly Sisters. It is difficult to keep count of the many costumes they wear, which seemed to change with each Scene; and, as many and varied as they are, each of their costumes are garish riots of colour and extreme bad taste.  Absolutely fantastic! The costume makers must have worked long and hard on producing such well-designed and high-quality outfits.

As soon as members of the Audience enter the theatre, they know they are in for a good time because in front of them is a most impressive stage setting. Centre stage contains a huge floor to ceiling story book containing pages of stunning and skillfully painted scenery that are turned over as the performance is played out. It must have taken a monumental effort by the Production Team to devise and build this magical set.

It goes without saying that a show of this scale requires a large backstage crew to organise the lighting and sounds, and each and everyone involved should take a well-deserved bow along with the performers.

Apparently, this is the 10th pantomime Sarah Haberfield has directed for the New Forest Players. This one is undoubtedly the best yet and gets 5 Stars. But she can also be certain that all of the children (and some of the adults) will always remember this production of Cinderella with joy and happiness.

We are already looking forward to next year’s production!