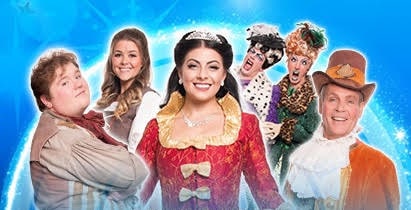 I normally put my ‘go see’ at the end of the review, but today I will begin with it. Go and see this show; take the family, take the grandchildren, but don’t miss it. Having thoroughly enjoyed last year’s Duncan Reeves production of Aladdin, our little family were full of high hopes for Cinderella and we were certainly not disappointed. It’s fabulous!

Cinderella’s writer and director, Peter Duncan, gets it so right. This show works so very well because it doesn’t try to be anything other than family entertainment, with a little bit of innuendo for the grown-ups, but with the target audience the children. So, there is a lot of slapstick, pathos, joy and laughter to be found in this ages-old rags to riches story. The excellent choreography is once again provided by Caroline Barnes, with stunning lighting from James Smith and what sounded like a full orchestra (but could not have been) organised by musical director Darren Reeves. The music choices were well thought out, ranging from Ivor Novello to modern songs that I was too old to recognise (but the youngsters did). The supporting cast must be lauded, as they took on multiple roles and were brilliantly professional in whatever part they played or danced.

The main cast were people who have won their stage credentials rather than huge names and the show was all the better for it. Lucy Kay, with her operatically trained voice, made a beautiful and youthful Fairy Godmother. Lucy-Jane Quinlan was a sweet Cinderella who sang like an angel and Richard Gibson (from ’Allo, ’Allo!) gave us a brilliant Baron Hardup, with a little bit of Herr Flick thrown in. You can always assume that professional entertainers can sing, dance and act, but this show still has a few surprises – mid-air heel clicks from Herr Flick for starters and a breathtaking tap routine from Prince Charming himself, played by George Beet.

The two ugly sisters, Ivana and Ivanka (Jay Worthy and Miles Western respectively), taking over the missing Dame role, were absolutely camp evil personified. They knew how to manipulate the audience and, with their wonderfully grotesque costumes (all credit to Amanda Hambleton) and fabulous banter, were so good that their massive applause was sadly drowned out by the hysterical booing from the children. The star of this show was Ethan Lawrence as Buttons. He played the role in an almost James Corden style, bashfully in love with Cinderella, and he completely won the hearts and sympathy of the audience. Incredibly, this is his stage debut and he must surely have a long future treading the boards should he choose it. He quite rightly got the biggest applause at the curtain and I would not be surprised to see a standing ovation as the run progresses.

There is of course the obligatory sing-along toward the end of the show and I am ashamed to say that one of the small reviewers that I brought with me decided to make a dash for the stage and joined in. His review was thus somewhat biased, but he continued to agree that the Ghost Scene was his favourite part. His six-year-old twin sister loved it all, but rather oddly seemed to enjoy Cinderella being locked away in the obelisk the most (I’m not sure what this says about my motherhood skills). When pushed, she decided the animals were her favourite. I will refrain from spoilers, but the transformation scene was magically breathtaking and I think she had that in mind.

So go and see this absolutely wonderful pantomime with its heart of gold. Make it a part of your Christmas celebrations. You will love it!