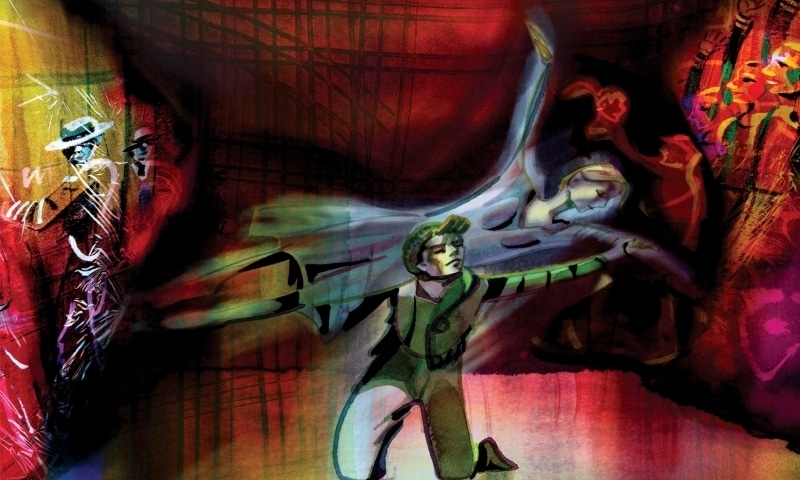 When reviewing amateur productions in Swanage, I have often marvelled at the standard achieved by quite a small talent pool, not easily augmented from outside because of the town’s comparative remoteness. One of the reasons why the standard is so high can be summed up in two words: June Ranger. For over fifty years her School of Dance has been giving the town’s youngsters – and not-so-youngsters – the chance to develop their skills and to enjoy the freedom of expression that comes from moving to music. Many of her students leave the town, of course, some to follow careers on the professional stage, but those who stay have a solid grounding from which companies like Swanage Musical Theatre benefit.

It is half a century since the school put on its first show, under the banner of Ranger Productions, so City of Dreams celebrates a golden jubilee. Appropriately, it showcases all the qualities that have made the Ranger School of Dance so successful. It was devised, directed and choreographed by June’s daughter, Caroline McCrory, and it is clear that the legacy could not be in better hands. The show has such pace, energy and quality that I hardly dared to look down to make a note, for fear of missing something good on the stage.

It takes its name from the ballet that makes up the first half: the story of Joseph, an Irish immigrant to the US who falls in love with a fellow-passenger, Sarah, but is lured into the vicious world of a New York gang. It provides the opportunity for a wide variety of dance, from the virile posturing of the gang members to the knowing elegance of the dancers in the night club scene, from the contorted shapes created by Sarah and her bullying father to the touching lyricism with which Joseph and Sarah’s love is conveyed. Caroline McCrory knows that choreography is more than just moves, it is also telling a story, and her creativity is superb.

As Sarah, Bethany MacDonald is fluid, expressive and technically sound – a breathtaking performance. She is partnered by James Lovell as Joseph, and I did wonder at first if his performance conveyed enough strength, but he accomplishes some difficult lifts and with a little maturity could develop into an outstanding dancer. The chemistry between the two had more than a few handkerchiefs dabbing at eyes as the house lights came up for the interval.

The second half is more of a variety show, with some singing and acting thrown in. The singing includes Emma Fidler whose two songs, ‘With You’ and ‘Never Enough’, were not much to my taste but do serve to show off her virtuosity. She is all but upstaged by Isobel Smith, who can’t be more than about eight but knocks you backwards with a voice that is an astonishing combination of purity and power. Quick, someone, find a production of Annie in which she can play the lead before she gets too old.

However good, the singing is something of a distraction from the dancing, which includes ‘Top hat, white tie and tails’ as a terrific second half starter, a striking avant-garde interpretation of the ‘Wrench and Numbers’ theme, and an uproarious Addams Family-based finale. As in the first half, the slick togetherness of the ensemble dancing is a tribute to the performers’ focus and concentration on stage but also to what must have been hundreds of hours of rehearsal. The reward is not only the huge enjoyment that the show will give its audiences but, for the young people especially, confidence, discipline and self-awareness.

Finally, a shout-out for the costumes and the projected backgrounds, neither of which would have disgraced a professional production.