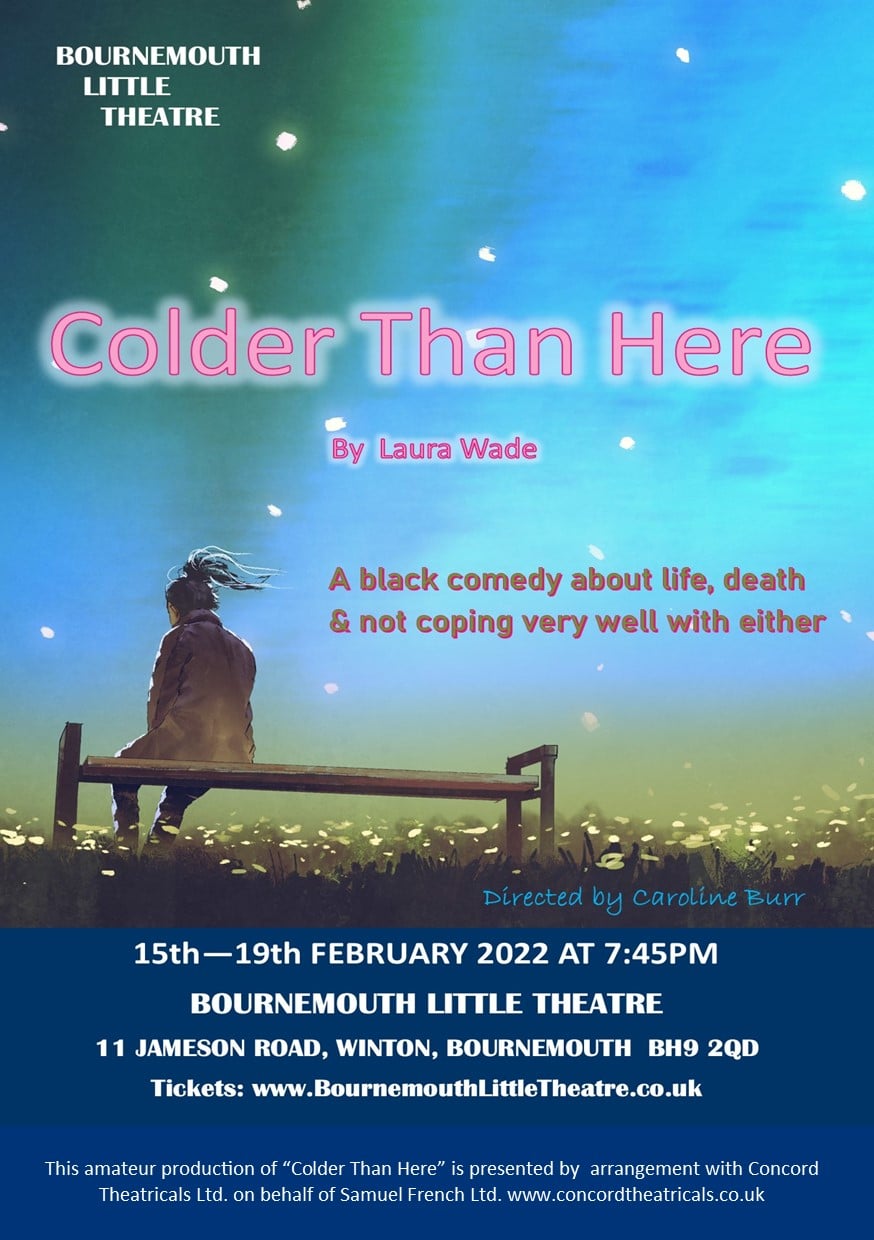 When we talk about the experience of grief, it is very rarely a shared emotion. Whilst on the face of it the general societal expectation is to see a person fall to pieces, in tears and unable to complete the simplest of tasks, the reality can be very different. Of course, one of the less discussed subjects is how you begin to grieve for the loved ones whose time is running out, and how you continue to live a life in the face of their inevitable passing. Colder Than Here, performed at Bournemouth Little Theatre, explored these themes with a dose of care and dark humour whilst following the changes of a family whose mother has only been given months to live.

The production had only two separate types of scenes; the day-to-day scenes which took place in the living room of the family home, and the cemetery scenes, seeing the family attempt to find the perfect resting place for their mother ready for when she passes. When the performance began, the scene was set in the living room; however, on starting, there was an immediate scene change which was a little bit jarring for the audience. Whilst the scene change was clearly necessary, there was an amount of confusion as to why the scene wasn’t set for that particular Act in the first place. This may have been a creative decision, but I’m not convinced that the reasoning for it was clear, and it felt a bit disorganised. That aside, the set was simple but effective, and there was a clever use of projection which helped the audience to feel immersed in the scenes.

Throughout the show, there were some challenging themes that were explored, and this was done in a very respectful and human way. Subjects such as bulimia, terminal cancer and dysfunctional romantic and family relationships were all discussed, along with fear of death and loss. Whilst this all sounds incredibly morbid, it was very beautifully done, with the original playwright, Laura Wade, clearly taking time to research the areas she was writing about. Whilst there was a hugely emotional element to some of the discussions being seen on stage, it was paired with a dose of good, old-fashioned British stoicism and dark humour. Whilst still thought provoking, this helped the show remain pacey and enjoyable.

Themes such as this require the performers to have excellent acting ability and, with only four people in the show, this was going to be a challenge for all involved. Jordan Sky Finding, who was in the role of the chaotic and flawed Jenna, was a stand out from beginning to end. Her character was believable and funny, but extremely vulnerable and clearly still very young. It was with great skill that Jordan showed a character who had some considerable growth from the initial scene through to the final scene, demonstrated both with performance and ongoing subtle changes to her appearance.

Peter Watson, who played the role of the emotionally stunted father, Alec, also demonstrated excellent ability to bring his character to life. He delivered some of his drier and funnier lines with skill, whilst also visibly changing scene to scene, showing more care affection to his wife and daughters.

Sophie Powell was a good fit in the role of the strong and perfect Harriett, really coming into her own as the production progressed, and she was able to tackle some more emotional scenes which showed that Harriet, whilst strong, was also very vulnerable and needed as much support as anybody else.

Finally, Joy Blake, who played the role of Myra, held possibly the most difficult role of all. She brought to life the resignation of her lot, the fear of the unknown, and the desperate attempts to bring her family together, whilst also showing the ongoing decline of her health. It must have been a real challenge, but ultimately resulted in a very powerful performance.

This was a very enjoyable evening and a performance I would recommend seeing if you can get the chance to go. There are performances every evening this week (16 – 19 February) at 7:45pm.

[Editorial: It is with regret that Bournemouth Little Theatre have cancelled remaining performances from Thursday 17 – Saturday 19 February – further information here]