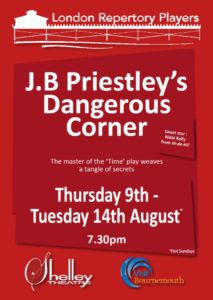 For years now, teachers of GCSE English Literature have been introducing teenagers to 20th century theatre with the aid of J. B. Priestley’s ‘An Inspector Calls’. It’s a joy to teach and even students resistant on principle to ‘set texts’ seem to enjoy and appreciate it: characters, relationships, structure and unveiling of interconnected human frailties all appeal. What is sad is that, I’m pretty sure, barely any will subsequently explore further a very fine writer of prose (fiction and non-fiction) and dramatic texts.

London Repertory Players’ second offering of their third season at Shelley Theatre, another of Priestley’s ‘Time plays’, shares much with ‘An Inspector Calls’: the respectable family (here add business) gathering; the teasing out of what individuals have concealed behind respectable, “decent” facades; the pursuit of truth and openness; the question of where and in what forms guilt resides. In this case, there is no mysterious “Inspector” but all, at different times, play interrogator/accuser and interrogated/accused.

‘Dangerous Corner’ is, moreover, a beautifully crafted play, a joy for actors (as I know from one of my most treasured personal memories from not many years ago) and audience alike. Every role provides its own interest while the whole relies on effective ensemble playing. Much of its success depends on the actors’ and director’s ability to encircle melodrama without actually falling into the vortex of that particular genre.

I’ve seen half a dozen LRP Shelley productions now: this one doesn’t disappoint. In the tradition of much-to-be-lamented weekly rep, the company provides a spirited, engaging production, supported by a set that, while a little uneven in detail, suitably evokes the period and social setting.

Hosts to the drama – all but one of the characters are at its heart – are husband and wife, Robert and Freda Caplan, played by LRP stalwarts Al Wadlan and Barbara Dryhurst. Both, particularly the former, give assured performances. It might have been the shoes – or just my personal response – but Freda’s movement and poise didn’t always feel as easy or as natural as was generally the case. As the play moves towards its climax – and I’m working very hard NOT to lapse into any spoilers – Robert’s character places particular demands on the actor’s ability to tread a line between the convincing and the not-so-convincing: Al Wadlan negotiates this tightrope effectively.

The third familiar face from previous seasons is Mark Spalding, here playing one of Robert’s business partners, Charles Stanton. I enjoyed his realisation of the character, largely because of his ability to find the right mixture of, in this case, cynicism (or is it realism?), emotional intensity and plausibility. Equally, as the younger, more feverishly neurotic partner (and Robert’s brother-in-law), Gordon Whitehouse, Musa Trevathan’s judgement is to be applauded: put simply, he got it right.

As Gordon’s wife Betty (It really is difficult not to say more about each character without disclosing too much), Hepzibah Roe gives a delightfully poised performance, all naivety and innocence until… And as strong and enjoyable a performance as any comes from Kirsty Cox as Olwen Peel, loved by one, loving another, stolidly placing the demands of others, not least of the business itself, ahead of her own longing – hers is a very tangible presence throughout. Finally, in the play’s only cameo, Nikki Kelly’s performance as Miss Mockridge is comfortable and generous, all the more effective for not being overplayed. For that, for all of the characterisations and for the consistently telling interplay between characters, vital for the overall success of this play in particular, credit goes to director Vernon Thompson.