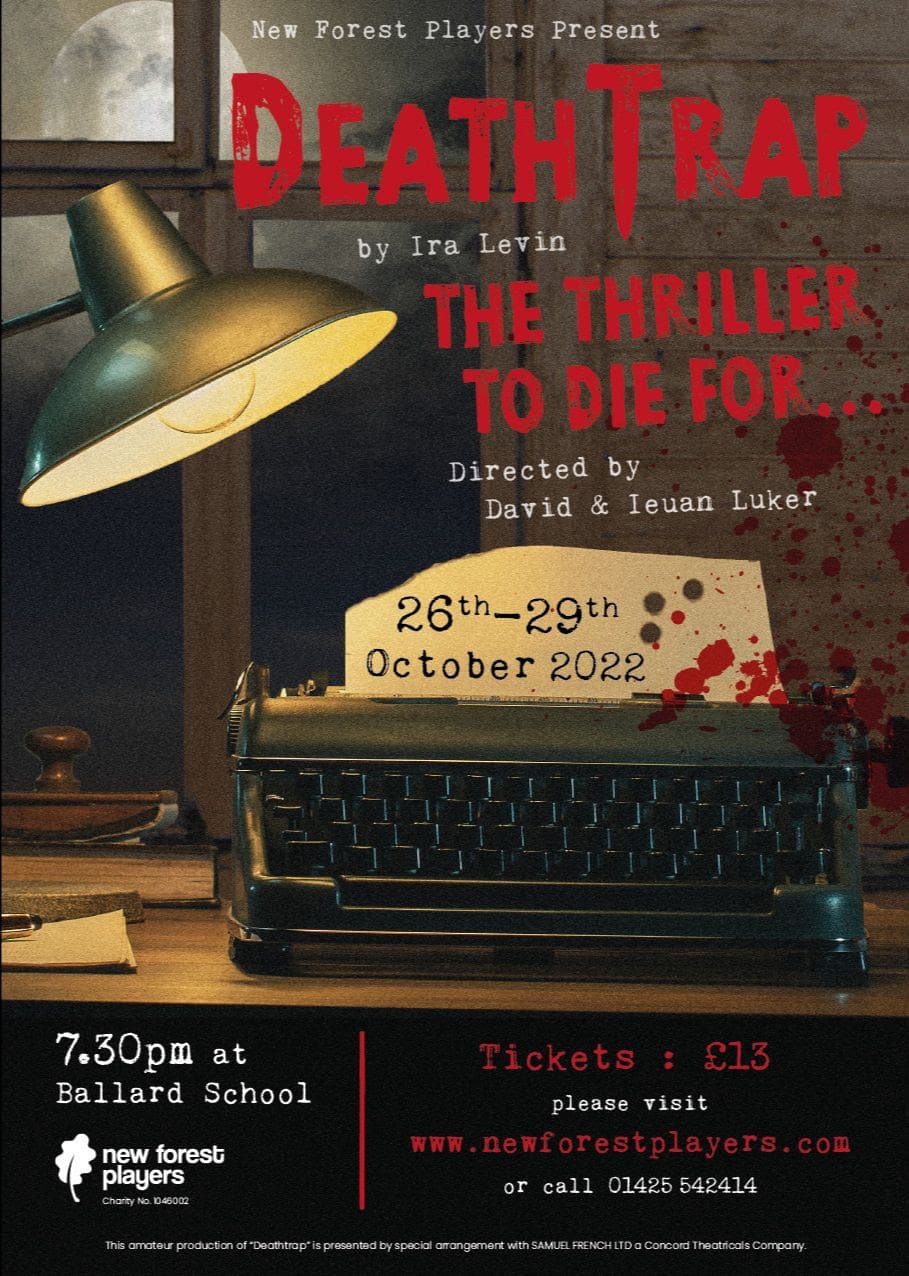 Staged in the excellent Ballard School Theatre in New Milton, and teasingly billed as The thriller to die for…!, Death Trap is the latest inducement from the ever-good New Forest Players, who continue to build on their track record of delivering high quality productions that stretches back almost 100 years!

The play has an auspicious history – written in 1978 by celebrated playwright Ira Levin (Rosemary’s Baby, The Boys From Brazil, et al) – it holds the record for the longest running comedy-thriller on Broadway. It also had a 3-year stint in London’s West End and has been revived many times since. In 1982 it was adapted into a successful film starring Michael Caine and Christopher Reeve. Its appeal can be attributed to the clever use of the usual helpings of murder, deceit, ominous dialogue, unexpected turns of events, etc all topped off with dollops of light and dark humour.

Death Trap is set in the 1970s Connecticut home of best-selling author Sidney Bruhl, who’s writing career is in terminal decline and he’s running low on money. Out of the blue, he receives a sure fire hit script of a play, also with the title Death Trap, from one of his former students, Clifford Anderson. Without hesitation, Sidney ominously says to his highly strung wife Myra that he’d “beat him over the head” to claim the script for himself. At Myra’s bidding, Clifford is invited to the house by Sidney to discuss collaborating together on fine tuning the script and maybe even producing it. Add to the mix an interfering neighbour, Helga Ten Dorp, an eccentric celebrity clairvoyant, and Sidney’s seemingly straight-laced Attorney, Porter Milgrim, who has secrets of his own, and we have all the ingredients of the archetypal ‘Whodunit’.  But the plot twists and turns in the most unexpected and surprising of ways again and again, keeping the audience in suspense and guessing on what will happen next until the final scene!

Chris Davis delivers a fine performance in the leading role of the conniving and self-assured Sidney. Coney Bundock is equally good as the timorous and nervy Myra. Michael Deacon plays Clifford Anderson, and although in the programme notes it says he found the character particularly challenging, especially getting the accent right, he need not have worried because he nails the role. Victoria Sandford performs the part of Psychic Helga Ten Dorp and, though essentially a supporting part in the play, it is a pivotal role as it provides most of the comedic elements, which at times are really hilarious. Needless to say, perfect timing in the delivery of the lines is essential and Victoria produces a great all-round performance. Paul Skelton plays the other supporting part of Porter Milgrim. Apparently, Paul has just returned to acting after a 25-year hiatus. Well, one simply couldn’t tell it from this first-rate performance.

The stage designers and construction crew are to be congratulated for recreating the study of a 1970s American home to provide an impressive setting for the play. The room is dominated by wall frames containing a mounted array of antique weapons (which come into use as the action proceeds), accompanied by posters of Sidney’s successful past plays. There is also an atmospheric red colour theme to the decor to match the murderous intent of the protagonists! The excellent sound effects and lighting, always essential elements in a Thriller, complete the accomplishment.

Co-Directors David Luker and Ieuan Luker can chalk up another success for the New Forest Players.

Death Trap runs until 29 October and judged on the audience reaction this is a production local theatre goers should not miss!