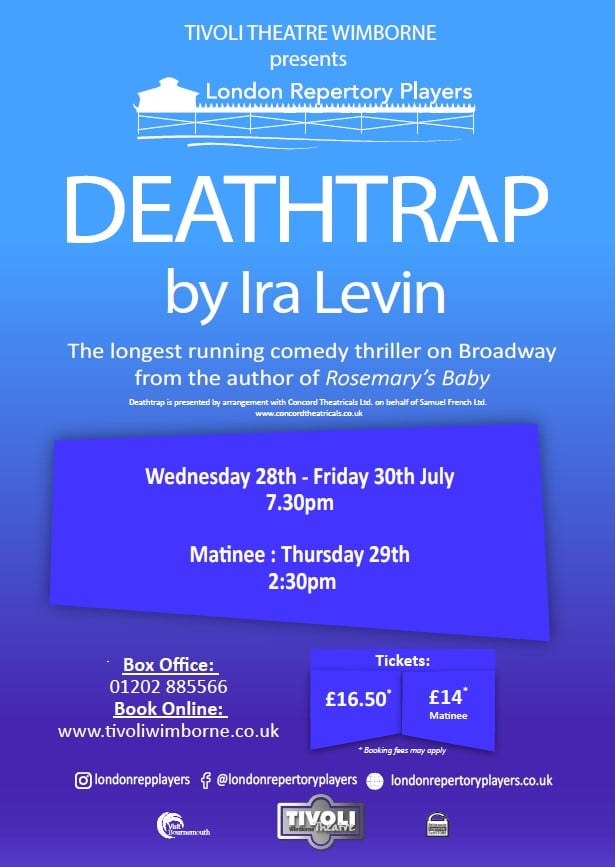 What a relief! Live theatre is back! To walk into a theatre foyer, pick up a ticket and take a seat in an auditorium felt so good tonight. Added to that, the production itself comes with a Covid-related twist and one of those behind-the-scenes stories that are themselves the stuff of theatre.

Since 2015, LRP have brought an annual season of professional productions to Boscombe’s Shelley Theatre. With the latter yet to reopen and live theatre treading carefully, a change of venue and a single production mark their return to the Bournemouth area. Deathtrap, still holding the record for longest-running comedy-thriller on Broadway, proves an excellent choice for this long-awaited return.

Set in 1978, in the central character’s study at his home in Connecticut, at the heart of the drama is successful playwright Sidney Bruhl, now artistically and financially becalmed amid box office failures and writer’s block. Bruhl is played by LRP lynch-pin Al Wadlan, an actor who always pleases and who, in this production, proves adept and assured as the central character. Having received for his critical assessment a script written by a former student, Clifford Anderson, he shares his initial thoughts with wife Myra, then rings to invite the young, aspiring playwright over to discuss possible improvements: the script, like Levin’s play itself, is entitled Deathtrap, uses a single set and involves just five characters.

Thereafter, … it is up to you to go along for yourself and be treated to a superbly crafted, absorbing and entertaining piece of theatre. Vernon Thompson’s skilful direction weaves a tangled mesh of the elements that characterise such plays: plot twists, turns and reversals; murder; deception; and dialogue and action that might or might not be exactly what they seem. Pace, timing and the balance between elements of comedy and thriller, with dashes of melodrama and revenge tragedy, are all very well judged, providing a highly enjoyable evening’s theatre.

As Myra Bruhl, Victoria Porter is an always convincing foil to Al Wadlan’s Sidney, whether their interaction is harmonious or discordant. Equally, Claire Fisher as psychic neighbour Helga Ten Dorp and Richard Mullins as Bruhl’s lawyer Porter Milgrim are quick to establish the distinctive identities of their characters, providing splendid foils for Bruhl in particular.

Sympathy must go to Pavel Steiner who, until a week ago, was to have played Clifford Anderson. The answer to director Vernon Thompson’s nightmare emerged in the form of young actor Jonny Warr, who, stepping in with just a week in which to learn and rehearse the role, makes his stage début after graduating from The Royal Birmingham Conservatoire in 2020. Had I not learned of this beforehand, I would have been impressed by his performance; it becomes all the more outstanding given the dramatic (sic) circumstances. The interplay between Warr and Al Wadlan, absolutely vital to the play’s success, is excellent.

Allocation of and distancing between occupied seats is skilfully managed and it was clear, not least from the laughter and the applause, how much the first-night audience enjoyed the performance.

The short run continues with performances on Thursday 29 July (2.30 pm and 7.30 pm) and on Friday 30 July (7.30 pm). Whether you have missed regular pre-Covid theatre trips or are in the mood to add the delights of live theatre to your life, if you possibly can, book yourself a ticket and get along to the Tivoli Theatre for a a thoroughly enjoyable production.