London Repertory Players spent two weeks in residence at Boscombe’s Shelley Theatre in August last year, presenting two small-cast thrillers, The Business of Murder and Dead of Night. Director Vernon Thompson and team seem to have enjoyed that visit as much as those of us who saw those productions: enough to have returned twelve months on. This time, they bring three productions, with a slightly larger company, at the heart of which are three actors – Barbara Dryhurst, Mark Spalding and Al Wadlan – who featured prominently during their 2016 season.

This summer’s season opens with Frederick Knott’s classic crime mystery, Dial ‘M’ For Murder, originally staged in the London’s West End in 1952 and brought to the screen by Alfred Hitchcock two years later. While not, perhaps, as tense as some examples of the genre, this remains a well-crafted play, here confidently presented.

Knowing the demands of creating a set for a single production, I can appreciate the challenge that Shelley’s comparatively small stage presents for a visiting company providing three diverse productions within a three-week period. Nevertheless, for me the least effective element within this production is the set, which, while suggesting a London flat in the early 1950s, does not seem to merit one visiting character’s praise. Overall, though, it is an improvement on last year’s rather cramped staging, here reflected in the ease and fluency of the actors’ movements.

A somewhat muted opening to the first scene is the least satisfying passage within the production, the duologue between Sheila Wendice and not-so-old flame Max Halliday seeming not so much appropriately low-key as somewhat lacklustre. This stems more from Laurent Zhubi’s characterisation of Max, which had me unsure how much was the character’s and how much the actor’s tentativeness. The characterisation improves but never feels as assured, natural or absorbing as those around him. As the object of his enduring yearning, Cecily Nash becomes increasingly effective in a role that is not the best-written in the play. 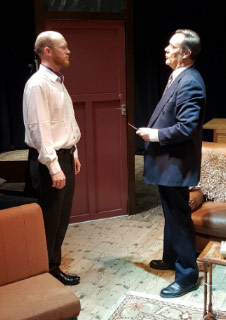 What sparks real energy into the production is the appearance, as Sheila’s husband, Tony, of Al Wadlan. As in last year’s productions, Wadlan is convincing and engaging. Whenever he is on stage, the pace is maintained and the audience’s attention held, both by his individual characterisation and by the interplay with the remaining two characters.

The first of these, Nicholas Murchie in the shifting persona of Captain Lesgate, provides a performance that complements Al Wadlan’s, with its comparative verbal economy, growing awareness and unease. The two work particularly effectively together. Equally, Wadlan’s interaction with Mark Spalding’s shrewdly understated – but no less commanding of our attention – Inspector Hubbard is reminiscent of the strong rapport between the two at the heart of last year’s productions. Overall, the dynamic between the characters reflects credit on Knott’s writing, Vernon Thompson’s quietly assured direction and the actors’ own stagecraft.

At just under two and a half hours, this is a very rewarding opening to, and augurs well for, what promises to be a satisfying three weeks. Clearly this was the feeling across an audience – and how pleasing to be among an opening-night full house – who added cheers to whole-hearted applause at the curtain.