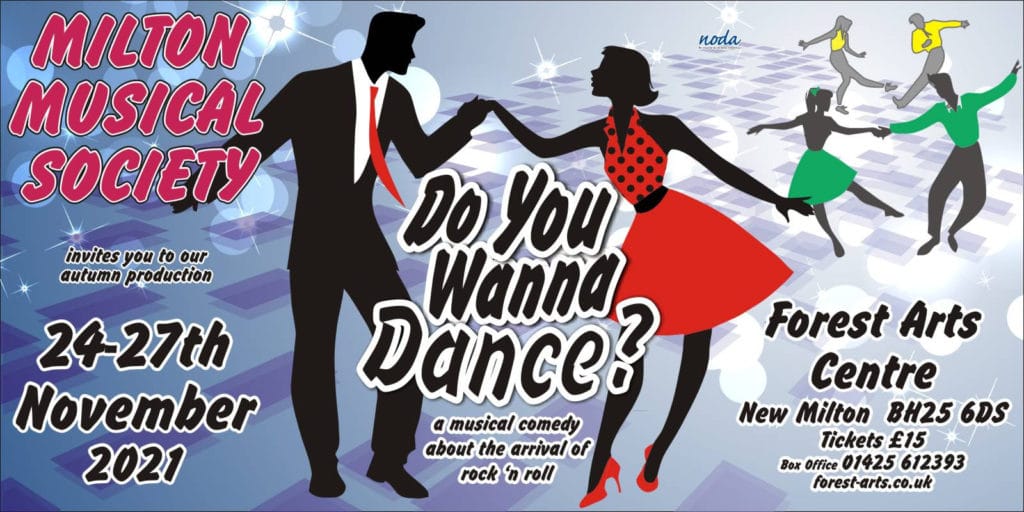 Do You Wanna Dance? is the story of a 1950s fictious dancehall, desperately holding on to a post-WW2 big band dancing era that is fast going out of fashion. As bingo becomes increasingly more popular, the dancehall is threatened with closure so developers can change it into a bingo hall. When the staff and their friends realise their jobs and future are at stake, they decide to bring more modern music into their hall with an impromptu talent show of jive, lindy-hop, skiffle and early rock & roll.

After an enforced 18-month hiatus due to lockdown and closed theatres, Milton Musical Society re-emerge back into live theatre with their brand new musical comedy, written and directed by Jon Shiner, Kirsti Warne, Jess Barras and Emma Hardy. With a creative and production team of four and the added challenges of collaboration at crucial times during lockdown, there was a risk that the production could become rather disjointed.

There were times during Act 1 where this seemed to be the case – rather like a collection of songs linked by a plot that needs increased depth to it. The “threat” of rock & roll and bingo doesn’t feel ominous enough; it needs a greater sense of trepidation from the dancehall staff or increased intimidation from the developers for added light and shade. The venue lends additional challenges with heavy footfall when the whole cast are moving around and the raked seating looking down onto the performance area meant it was virtually impossible to see any dance footwork unless sitting in the first row. Most costumes are ideally set in the 1950s, although a few did lean towards a later period. The projected backdrops are a good idea in an Arts Centre but would benefit from smoother transitions, while at times the music (amplified or live from the excellent on-stage musicians) overpowered solo voices.

However, there is no reason to be disheartened! West End and Broadway shows have a ‘preview’ season as Companies tweak and perfect their productions, and Act 1 on opening night here felt like a development phase for this new musical.

There is still a great deal to enjoy, while the enthusiasm and enjoyment of the cast is infectious, especially in Act 2 when the show really comes alive with the energy, choreography and ‘star turns’!

Emma Hardy (Celia) is outstanding. Her singing voice is beautiful, her characterisation and facial expressions spot on, and she is an accomplished dancer, with a performance compelling for all the right reasons. Lizzie Crane is also first class as Gladys, lighting up the stage with her musicality and characterisation. Shae Carroll (dancehall manager, Stanley Dorkins) lives and breathes the emcee roll during the talent contest, effortlessly interacting with the audience with charm, cheekiness and terrific singing, as well as through Dorkins’ engaging relationship with his secretary, Gladys.

There are many skilful comedy performances and comic timings amongst the entire cast, with lovely little cameos. Keep your eyes peeled for the ensemble as well as those taking the mic front and centre, particularly the two Daves (Adam Davis and Chris Meineck) and Cayton Francis as Celia’s boyfriend, Barman Steve. Combining with Carroll in a brilliantly entertaining boyband, they almost steal the show!

The cast are clearly enjoying every moment of being back on stage – and you can’t help but be drawn into their happiness at the return of live theatre. Is the production faultless? No. Does it feel like a polished musical production? Not quite – yet… Is it a really fun evening’s entertainment? Will it make you wanna dance? Absolutely yes! If, like me, you find yourself singing along while tapping your feet, I guarantee you will leave the Forest Arts Centre with a smile on your face!